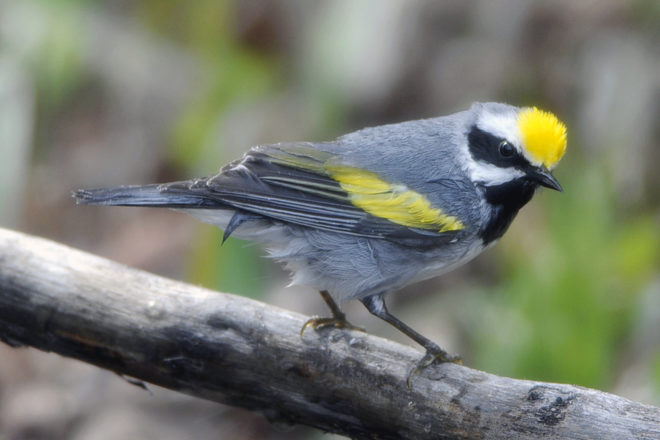 Many Door County people are enjoying migratory birds, either as they pause to rest or feed during their journey northward, or as they arrive and settle in to nest and raise their young. Gradually their numbers will increase to the point of exhilaration.

Soon indigo buntings, rose-breasted grosbeaks, Baltimore orioles, ruby-throated hummingbirds and at least a couple dozen warblers, many to nest here, will bring this awesome parade to a climax.

It’s likely that most people take this movement of birds from one country to another for granted, as though it will continue, unchanged, from year to year.

Sadly, that’s not the case. For example, about one-fourth of the world’s population of golden-winged warblers nests in Wisconsin, including Door County. The wintering sites of this flashy little bird are Colombia and Venezuela and research is showing that their wintering forest habitat is being threatened and continues to decline.

Fortunately there are some large protected wintering areas for these birds, but not nearly enough to feed all of these approximately 215,000 warblers. Annual habitat destruction can easily reduce their numbers by five percent or more annually. Here is where international cooperation is sorely needed.

The weather affecting the migrating warblers along their routes from their southern wintering grounds to Door County, the leafing of trees and shrubs and the emerging of insects needed to sustain them can vary considerably from year to year.

Some recent early springs had extremely cold weather which held back the tree leaf-out and the availability of insects. The swarms of millions of tiny black midges that appear on the scene as the foliage begins to develop become the primary food of the migrating flocks of warblers. Fortunately these midges don’t attack and bite humans! Under ideal conditions when the timing is right, there is plenty of food to be had and finally the warblers begin arriving in veritable “waves.”

It is a well-accepted fact that a lot of people, including some birders, don’t get overly excited about warblers. These so-called “butterflies of the bird world” are so small and fast-moving that it can be downright difficult and frustrating to get a good look at them and, once you do get them focused in your binoculars or spotting scope, their accurate identification doesn’t always come easily.

At least 54 species of these small, flighty, difficult-to-identify birds nest north of the Mexican border. Actually, about half of the bird population of Canada’s vast evergreen (boreal) forest is warblers, and the bird of prey whose summer diet consists largely of warblers, upwards of 90 percent or more, is the sharp-shinned hawk.

One of the most trusting and inquisitive songbirds I wish more people could come to know — the American redstart — may even rival the American robin in numbers in our state. The male of this small, chickadee-sized bird has fooled more than one beginning birdwatcher into thinking they were seeing a miniature Baltimore oriole. 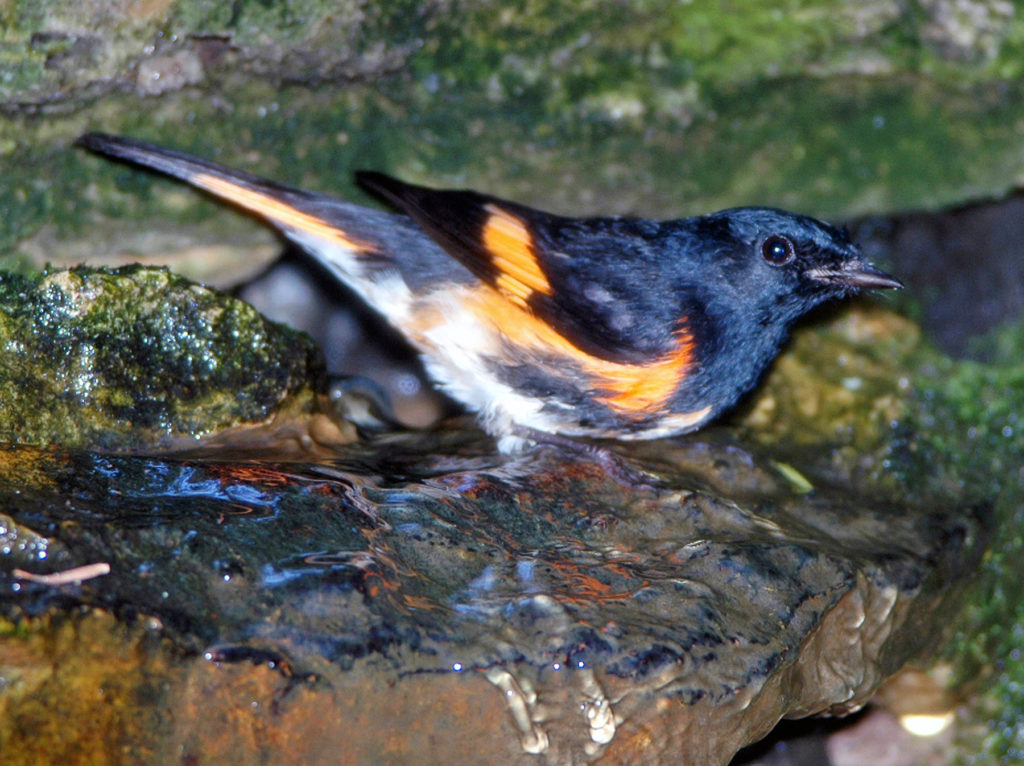 Latin Americans call this bird candelita, the “little torch.” The male is a glossy black with bright orange patches on his flanks, wings and tail. His belly is white. The female is olive-gray and the parts that are orange on the male’s plumage are yellow in hers.

Warblers don’t stay in one place very long, making the identification process difficult. They are constantly on the move trying to snatch small flies or midges or flitting from one branch to another, picking insects off tree limbs. However, many experiences with this flashy songbird have taught us that the redstart frequently is an exception to the “flighty” warbler rule. What is so incredibly wonderful and downright accommodating about these scintillating creatures is that quite often, while they are perched, they will droop and spread their wings and tails, further displaying their dazzling beauty.

The first Wisconsin Breeding Bird Atlas project began in 1995 and lasted for six years. I was coordinator for Door County and with the help of many skilled volunteers we were able to confirm nesting activity of 17 species of warblers. They are Nashville, yellow, chestnut-sided, magnolia, Cape May, black-throated blue, yellow-rumped, black-throated green, common yellowthroat, blackburnian, pine, black and white, mourning and Canada warblers along with the American redstart, ovenbird and northern waterthrush. Three other species were listed as probable nesting. They are the blue-winged, golden-winged and northern parula.

The ovenbird and American redstart nest throughout most of the state. Yellow-rumped and magnolia warblers nest mostly in the far north, but three areas in Door County have confirmed nesting and it is mainly due to our cooler, Lake Michigan-enhanced climate and having some sections of boreal forest.

One question that we have received on several occasions is whether it’s possible that different species of these tiny warblers have crossbred and produced hybrids. Interestingly there are two species, the blue-winged and golden-winged, which actually do occasionally mate with one another. One hybrid offspring is called the Brewster’s warbler and the other is referred to as the Lawrence’s warbler. The latter is the rarer of the two. In May of 2002 our early morning birding groups watched a Brewster’s warbler on several occasions.

A shy, secretive member of our nesting species is often called an aberrant warbler. It is the ovenbird and gets this qualification due to its different behavior from the typical warblers. It is a small bird but judging by the power of its song, one would assume it’s a considerably larger singer. 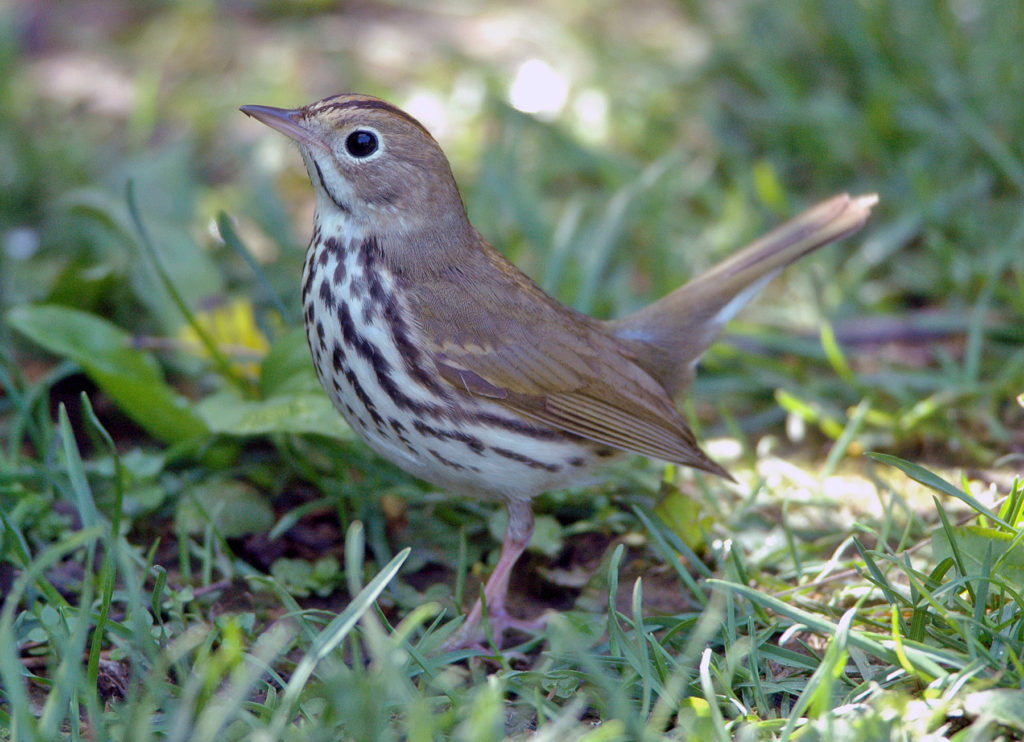 The ovenbird is called an aberrant warbler, meaning it does not act like most other warblers. It walks on the ground more than others. Photo by Roy Lukes.

Upon hearing its name, an even greater degree of mystery enters the picture, especially in this microwave oven, cellphone and iPad era. Why would anyone have given this loud-singing woodland recluse the name “ovenbird?”

It is invariably through pure accident that the well-concealed nest of an ovenbird is discovered. Years ago our good friend Jack Rudolph was searching for lost golf balls in the woodland near a golf course and came upon the ovenbird’s beautifully constructed dome-shaped, old-fashioned Dutch oven-style nest.

What a perfect name for this classy, unusual woodland warbler that resembles a miniature wood thrush. The aberrant term stems from its habit of walking rather than hopping, heavily streaked breast, relatively large eyes and other characteristics different from the more typical woodland warblers such as the American redstart or black-throated green warbler.

People are less likely to see this beautiful bird as to hear its loud, far-reaching song. F. Schuyler Mathews, author of the excellent but old Field Book of Wild Birds and Their Music (1904), wrote: “…nothing less than a double forte (loud) will express his emphatic accents in musical notation.”

More than one person we know describes this little creature as the “teacher bird,” based upon its song which starts rather softly and builds quickly to a ringing staccato crescendo, “teacher TEAcher TEAcher TEACHER!”

The shy ovenbird prefers to nest in a deciduous woods, preferably with a minimum of underbrush, and the more leaf litter the better. It regularly uses the bird bath in the late afternoon as the light begins to fade.

We can be very thankful for having all these magnificent colorful warblers nesting so commonly in Wisconsin every summer.