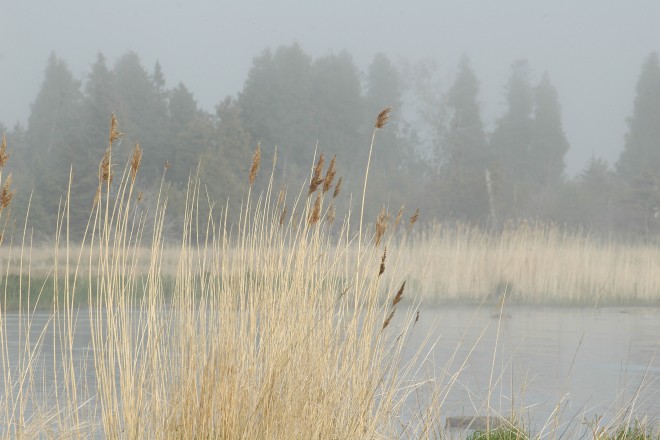 This is a tale of invasion, the story of an alien grass that is steadily taking over the shorelines and wetlands of Northeast Wisconsin. The bad seed in this story is an exotic, or non-native, strain of phragmites australis, otherwise known as common reed grass. Unfortunately for most residents of the Door Peninsula – human, animal and plant alike – phragmites (pronounced fraig-mighties) is becoming all too common. The spread of exotic phragmites is one of the greatest threats to our shoreland ecosystems, and that threat is growing.

This grass is not an ordinary, garden-variety grass. In the world of grasses, non-native phragmites is a monster. Able to tolerate a wide range of soil conditions and aggressive in nature, it can form dense, impenetrable stands that displace wildlife and native plant communities, in many cases, growing thick enough to shade out and kill shrubs and small trees. Growth along shorelines can inhibit navigation and block shore views. Imagine a lush lawn of Kentucky Bluegrass growing ten to fifteen feet tall and you have the idea. In one study, it was shown that the variety of bird species living in a wetland area decreased from over two dozen species to only four species once phragmites invaded and choked the wetland.

Phragmites is a perennial grass that thrives in moist soils. Its reeds, or canes, are unbranched, rigid and hollow and can range in height from three to twenty feet tall. A large, feathery seed head is produced in late July through September. Like all grasses, phragmites dies back to the ground in late fall. The dead canes are tough enough to remain standing for a few years after they were alive.

Phragmites spreads primarily by vegetative reproduction. Thick, intertwined roots can reach six feet deep while rhizomes (horizontal roots) spread the plant laterally. The plant also sends out stolons, or runners, with nodes every foot or so that are each capable of growing a new plant. Stolons from aggressive strains of phragmites can easily exceed fifty feet in a single growing season.

Native to many places in the world, phragmites has been and continues to be harvested by numerous cultures for a variety of purposes. For example, its long, strong canes make excellent roof thatch material. A native strain of phragmites does exist in the wetlands of Door County and was utilized by the peninsula’s original Native American inhabitants. Indigenous phragmites grows in sparse stands interspersed most harmoniously with a variety of other native plants. It does not usually reach more than six or eight feet tall. The troublesome alien cousin originated in Eurasia and poses a double threat here in North America. It not only out-competes native phragmites, it also interbreeds with the native strain, thus strengthening the aggressive tendencies of future plants.

Considering that phragmites is a grass and has a thick root system, control efforts can be labor intensive and generally require application of herbicide for eradication. A precautionary note here: for the sake of water quality, the application of herbicides in and around wetlands and water bodies is regulated by the Wisconsin Department of Natural Resources. The rule of thumb is as follows: if you were to stand in the area where you plan to apply herbicides with just socks on your feet and your socks get damp, you must use an approved, water-safe herbicide. If your socks stay dry, regular Round -Up will do.

Phragmites responds well to broad spectrum glyphosate-type herbicides (like Round-Up) that break down in the environment more quickly than other, harsher chemicals. A few approaches can be taken. The best solution depends upon the location and density of the growth, especially in relation to other more desirable vegetation. Digging and frequent mowing can keep phragmites in check, but will not kill it.

There are two control methods that involve herbicide application. For both, all standing dead canes are mowed, knocked down or burned off between late fall and early spring. This will allow unimpeded access to new growth and helps minimize herbicide usage. If the stand is thick and no other desirable plants inhabit the area, green shoots of phragmites can be spot sprayed with glyphosate. Spot spraying can be repeated once or twice during the growing season. In August and September, when the plant is drawing energy down into its roots, the green canes can be bundled with twine and cut with a hedge shears. A stronger mix of glyphosate is then painted or sprayed onto the clump of fresh cut stems. This method is preferred when the phragmites is growing among other more desirable plant species. The application is given directly to the offending plant leaving the other vegetation to thrive.

Proper herbicide treatments can be over 90 percent effective in one application. Whatever methods are employed, follow up is necessary as, invariably, some of the root system will survive. A moderate stand of phragmites can take three of four years to fully eradicate. Always use caution when working with herbicides and avoid overspray. Glyphosate will damage or kill any green shore plant it comes in contact with and herbicides not absorbed by a plant are toxic to fish and shore creatures. Laws that govern herbicide use require user responsibility and application only on the target species.

What exactly is an invasive species?

An invasive plant or animal is one that has a tenacious, aggressive ability to out-compete other species for dominance in an ecosystem. Invasive species tend to be generalists, able to exist in a range of habitats and conditions. They also usually are able to reproduce rapidly and in large numbers. While there are native species that have invasive tendencies and can be problematic locally, the real threats are invasive species that are exotic or not from these parts. Exotic plants and animals are free of natural predators and competitors that kept them in check in their native environment. It is important to note that most exotic species are not problematic and have naturalized here without causing problems. The problem arises with some species when, free of competitors and pest species, they propagate profusely.

In the presence of invasive species, biological diversity is at risk. Biological diversity, or simply, biodiversity, is the total number and variety of plants and animals that make up an ecosystem. Generally, the greater the biodiversity of an ecosystem, the more important (and usually more fragile) that ecosystem is. The planet is currently experiencing the most rapid rate of species extinction ever and invasive species are a growing part of this genetic loss.

The Door Peninsula is a special place, a hotbed of biodiversity. One would have to travel hundreds of miles to find a place that equals the Door Peninsula for the sheer variety of plants and animals that thrive here. For all who enjoy this rare gem, it is a stewardship duty to safeguard the peninsula’s biodiversity for its own sake as well as our enjoyment and the pleasure of all future generations.

Closer to the pocketbook, unchecked growth of invasive species is detrimental to our natural spaces, species diversity, economy and property values. With the ability to steadily out-compete rivals, invasive species change the balance in our ecosystems, impacting things like the success and long-term viability of rare plants, commercial fishing catches and even views of the lake. In Door County, tens of thousands of dollars are being spent annually to stem the tide of invasive plants and animals. Nationally, invasive species are costing in the tens of billions of dollars. The good news is that invasive species are manageable as long as action is taken. While invasive species will be a persistent problem, a little effort goes a long way towards keeping them in check.

There is help available.

Locally, Door County Invasive Species Team (DCIST) is hitting the swelling tide of invasive species head on. The DCIST is housed in the Door County Soil and Water Conservation Department and is set up to train landowners, neighborhood groups and interested citizens to properly deal with invasive species. At the state level, The Wisconsin Department of Natural Resources (DNR) has a program called the Landowner Incentive Program (LIP) whereby the DNR will pay for up to 75 percent of the cost of removing invasive species from qualifying properties.

While groups like the Door County Land Trust, The Nature Conservancy, the DNR and DCIST have been actively making great strides to protect the most special ecosystems on the Door Peninsula from invasive species, no one functions in isolation. It is up to all citizens – landowners, full time residents and tourists alike – to become educated and be active in keeping invasive species in check. The best time to stem an invasion is before it happens.

The Door County Invasive Species Team has a program to train citizens in the proper treatment of invasive species. For questions about phragmites or other invasive species, or to set up a neighborhood training session, please contact Bob Bultman at [email protected] or (920) 839-2019.