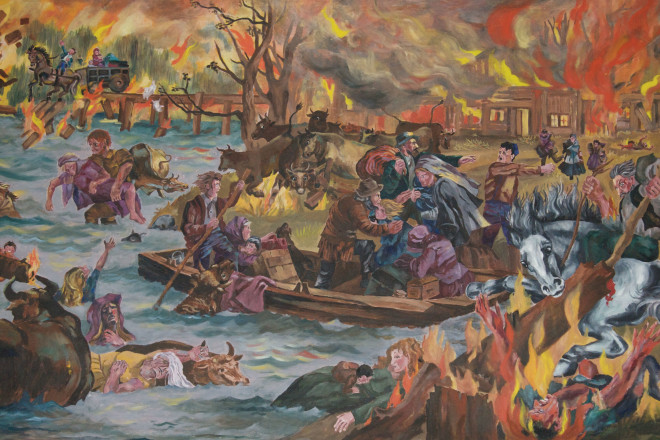 The Belgian Heritage Center will host three days of programming to commemorate the 150th anniversary of the Great Fire of 1871. Fires on Oct. 8 devastated the landscape on both sides of the bay of Green Bay, including a large part of the Belgian settlement area in Door, Brown and Kewaunee counties, and forever changed the lives of the Belgian settlers and influenced the region for generations.

On Oct. 8, the anniversary of the fire, a solemn remembrance vigil will be held.

On Oct. 9, a Great Fire video will premiere, concentrating on how the fire affected the Belgian settlers, and Barb (Englebert) Chisholm will reenact the survival story of her great grandmother, Emmerence (Gaspard) Englebert. David Siegel, captain with the Green Bay Metro Fire Department, will also present “Understanding the Realities of the Great Fires of 1871,” and author Virginia Feld Johnson will be on hand to discuss her new book, When the Night Rained Fire: October 8, 1871, Kewaunee County and the Great Fire. The Brussels-Union-Gardner Fire Department will have fire trucks at the Belgian Heritage Center, 1255 Cty DK in Brussels, for visitors to tour.

On Oct. 9, Chisholm will repeat her reenactment story, along with additional screenings of the new video.