Whenever there is an election right around the corner, I can anticipate a small passel of partisan promoters coming to my door to praise their favorite candidate. A couple of nice but insistent young people recently stopped by and shared their “good news” in an effort to convince me to join their church. But then, one day, I had a visitor who actually surprised me. 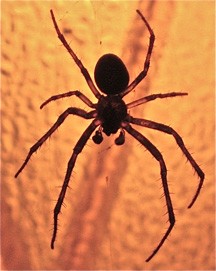 He wanted to know whether I’d like to have him spray the house for spiders. Because our house is very near Lake Michigan, we do get a healthy population of spiders on the lake side. To my surprise, I discovered that several of my neighbors actually do have their houses sprayed with arachnid-attacking aerosol. But, as I explained to the salesman, I have a certain affinity for my spiders. They add drama, art and fun to the yard. The orb weavers produce beautifully intricate gossamer larders in which they snare and often store insects. Jumping spiders and wolf spiders don’t make webs, but prowl the premises to pounce on various unsuspecting bugs. Crab spiders, on the other hand, will patiently perch on flowers and wait for lunch to come to them.

Our spiders are valuable to birds. Cedar waxwings, grackles, sparrows, finches and cardinals often hover awkwardly at the windows grabbing orb weaver spiders, some of which are rather large, right off the web. These they feed to their hungry nestlings. Hummingbirds gather spiders’ webs and use them to build their tiny nests.

Spiders have been around for hundreds of millions of years. Many have excellent eyesight, and their behaviors are complex. Some even do vocalizations, of which most of us are unaware. Plus they have several significant advantages over toxic sprays. Unlike pesticides, they are harmless. They don’t cause any genetic afflictions. They aren’t endocrine disruptors. They aren’t associated with lymphoma or leukemia. They prey on insects, and this pest control service they provide…is free.

Some homeowners find spider webs bothersome, I simply sweep off or wash my windows, when appropriate, and don’t worry about it. It’s a small price to pay for such fine educational entertainment. As for spider bites, I’m skeptical. In all the years we’ve had spiders around the house and occasionally even inside, we’ve never had a single incident, even when I pick one up to place it outside. In fact, if Little Miss Muffet had just sat on her tuffet, and refused to be frightened away, that lone little spider that sat down beside her could never have ruined her day. I thanked the prospective spider sprayer for the visit but assured him my spiders needn’t worry about me.

Mosquitoes are another interesting pest. Many people area spray, also called “fogging,” to discourage mosquitoes. This may kill a bunch of mosquitoes, but there are a couple problems: poisons don’t know when to stop. They work their way through the food chain and will also kill predatory bugs that feed on mosquitoes. Mosquito swarms have an ability to quickly repopulate an area (unlike predatory bugs). Not only can you end up with more mosquitoes, but now the predators are gone. Remember that the poisons can harm you, your children, pets, birds, bats, etc. A better idea is to vary the time spent in an area that has mosquitoes. Many species feed only during twilight hours. Just wait until their reproductive cycle ends (generally a couple weeks), and/or use repellents applied appropriately to cotton fabrics. These can be effective.

Recently I received an email, followed by snail mail, from someone offering to make my yard “the best looking one in the neighborhood.” They have a spray that will feed and weed my lawn all at the same time. All I needed were four treatments of their special potion over the next few months. They could rid my lawn of dandelions, in fact anything that isn’t grass. They want me to be aware that getting rid of broad leaf plants is fundamental to having the perfect lawn. I wrote back to the company, using their self addressed, stamped envelope, of course. I simply asked why my harmless broadleaf plants (mostly clovers and dandelions) are problematic, while the blue grasses they prefer, which are known causers of hay fever, are just fine. I’ve not heard back.

If a lawn lacks broadleaf plants, think of it as a red flag. When our daughter and son were children, my wife and I only let them play in lawns that had lots of clover and dandelions. Why gamble with their health?

A monoculture of just grass is a sign that one of the major ingredients of Agent Orange is likely in use: 2, 4-D. This broad leaf herbicide has been around for a very long time. It’s readily available despite its downsides, of which there are several. To review the hazards just Google 2, 4-D NRDC. While you’re at it, you might also check out 2,4-D msds. This will allow you to review the “material safety data sheet.”

Philosophy has a way of etching itself onto landscapes. Do we see ourselves as being in charge of nature? Or do we consider ourselves as humble members of a larger community of plants and animals? This attitude can often be read in the plants, textures, insects and bird songs evident around our home. Maybe next time someone rings our doorbell we will take them on a garden tour. 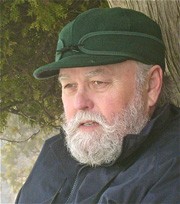 Green Bay native Dale Goodner served as chief naturalist for Peoria Park District and retired as supervisor of Environmental Interpretive Services. He and his wife Mary now live in Algoma.