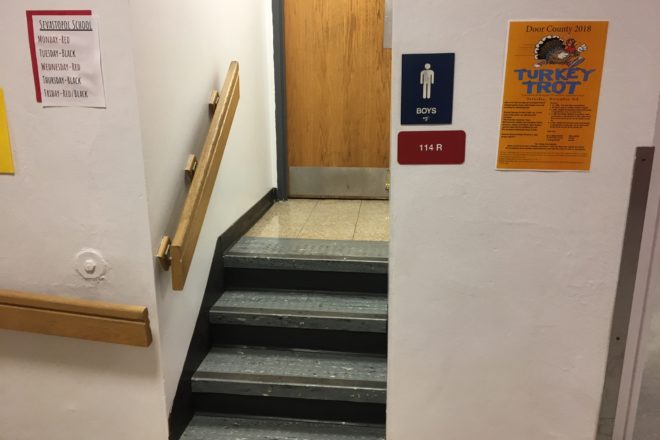 To a first-time visitor to the Sevastopol school buildings, the number of stairways, steps, doorways and short hallways is mind-boggling, but few things look more out-of-date than the steps and narrow doorway to one of the restrooms the students must use. Submitted.

A stranger walks through the main entrance and asks a student who’s studying in front of her locker for directions to the open house for the school construction referendum.

She politely points the visitor north, down the hall, through three open doorways and down a ramp to the Sevastopol School’s “multipurpose room” – inside of the section of the school that dates to 1924. Nope. Not in there. A book sale fills the room.

So, it’s back up the ramp through the doorways to the library, half of which sits in a section of the building constructed in 1965 and half of which occupies a 1996 addition.

So many interior doors. So many steps, stairwells and ramps. That’s this visitor’s first impression upon arriving to learn more about the needs at the school, where the board is seeking about $240 a year more from a taxpayer with a $200,000 property to pay for $25.1 million worth of demolition, new construction, renovation and safety, STEM facilities and modernization upgrades.

Are all the interior doors and zig-zagging halls a concern? Yes, but not as big of a concern as all of the entrance points into the five separate additions, some of which have no shared walls, said superintendent Kyle Luedtke.

Nineteen. It’s a nagging and repeating number for Luedtke. That’s the number of entrances to the buildings on the school campus, “which is a safety and security concern.” There also are a lot of “nooks and crannies” throughout the exterior and interior of the conglomeration of buildings, which a bad guy or just a temporarily angry person might “take advantage of,” said Peter Kerwin, referendum citizens committee member.

Nineteen is also the number of rooflines on the campus. That’s a whole lot of ongoing maintenance cost.

If voters approve the referendum Nov. 6, the district would greatly improve security throughout the campus as well as main entrances, but security is just one shortfall at the school.

On a formal tour Oct. 16, those odd doorways, twisting, turning hallways and bizarre stairways kept appearing. Many of the doorways in the 1946 and 1924 portions of the school are too narrow for a wheelchair, and in some spots, a person in a wheelchair could not open a bathroom door. Students have to go up three steps to get into a couple of the restrooms.

When a new student with a disability arrives, part of their orientation might be learning how to get onto a sort of bannister-mounted emergency slide, with the help of four school employees. It’s part of the fire escape plan in case of fire and elevator failure.

Americans with Disabilities Act issues are not the only shortcomings for the 1946 and 1924 portions of the buildings. The district theoretically could spend millions of dollars trying to correct them, right?

Wrong, said Luedtke. If the district corrected more than 50 percent of the issues, the entire 1924 section or 1946 section would have to be upgraded to meet modern codes ranging from electrical rules to hallway widening (then one asks, is this a weight-bearing wall? What about this one?).

What other problems were showing during the tour?

The three-story first-through-eighth-grade 1924 section of the building once was surrounded in windows. About one-fifth of those were bricked closed during the 1970s-era energy scare as an energy-efficiency move. Problem is, there’s no air-conditioning, and many of the rooms with the youngest grade-school students have just one window and no cross-draft on 80- and 90-degree early-September days.

And, next to the air-conditioned 1998 second-floor addition on top of the 1965 addition, the district’s students with the most severe disabilities go to class in a 94-year-old, upstairs classroom with no windows at all. Special-education and English-language-learning students have similarly tiny classrooms.

As previously reported by local reporters, there’s a foundation crack near the boiler room of the 1924 building. However a lot of the physical plant equipment is fairly new and can be reused in the new addition.

Some of the youngest students in the school walk up and down stairs to PE, lunch and recesses, which cuts into instructional time, Luedtke said. Some of the younger students in upper rooms also pass by a metal railing above a stairwell with openings they could, theoretically, fall through.

Then there are classrooms in the 1946 section where chair and desk legs mount into sliced tennis balls so their sliding won’t make the (mustard-and-maroon-colored) asbestos tile friable. There’s a second-story classroom where many white ceiling tiles have tan stripes, because every now and then the 1924-era third-floor girls bathroom plumbing leaks.

In the industrial arts and shop area, some new equipment and a lot of hulking, older machinery sit close together, meaning students often are nearly shoulder-to-shoulder. Three out of five welding booths were functioning properly, as of Oct. 16.

In addition to providing better classrooms and conditions for the elementary school children and providing better space for students with disabilities or one-on-one needs, the referendum, if approved, would result in new industrial arts, technology and agriculture education areas.

This month, Therma-Tron-X Inc. pledged to donate $2 million to add enhancements and equipment for “fab labs” in addition to the renovation – if voters on Nov. 6 approved both the $25.1 million school referendum and the two-year $2 million referendum to meet district operational costs. (Voters supported similar requests in 2008, 2011, ’13 and ’15.)

“That’s huge,” Luedtke said of the offer from Therma-Tron.

So, what if the referendum does not pass?

Board president Lisa Bieri said she thinks the campaign committee did a good job of getting the word out about the school-building needs, and is hopeful that open houses, tours and public meetings will pay off.

Luedtke said if it does not pass, the board would not have time to try again in April 2019. Construction costs are likely to increase between 3 percent and 4 percent by April, so the district would see savings by getting the referendum approved this fall rather than next spring. There is no election date available next November, so the next possible opportunity would come in spring 2020.

If the referendum did not pass, the board would reassess the 10-year maintenance and repair plan for the older portions of the campus – much of which it cannot afford to correct.

“Renovating is not a viable option,” Luedtke said.

Why can’t Sevastopol consolidate with Sturgeon Bay or Gibraltar?

Peter Kerwin, a CPA and administrator for PortSide builders, served on the referendum promotional committee and said the Sevastopol district benefits from people, like him, building a new home on a larger lot and the district benefits from some high-end properties. However, Sturgeon Bay has one of the higher property tax rates in the area, so people in Sevastopol would be unlikely to support a merger with the neighbor to the south.

He said he heard there had been talk, at times, of Gibraltar and Sevastopol consolidating, but it went nowhere. While Sevastopol benefits from a low tax rate ($5.05 now, $7.07 if the referenda pass) relative to the state average ($9.79) and regional average, Gibraltar voters are not likely to bite. Gibraltar ranks as one of the most property-rich districts in the state, with one of Wisconsin’s lowest tax rates at $2.93.