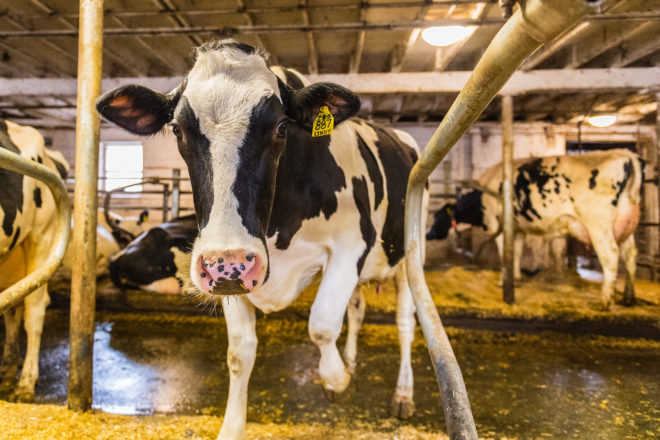 In last week’s issue we ran a commentary by John Holevoet, director of Government Affairs for the Dairy Business Association (DBA), pooh-poohing headlines such as “Powerful dairy lobby is meeting with government officials to push its pro-dairy agenda.”

It seemed a reasonable commentary. Holevoet declared that the “powerful dairy lobby” in this state is him and an associate – two farm kids turned lawyers.

And, he explained, since dairy generates $43 billion annually in economic activity, more than double tourism’s economic impact, “It is both reasonable and good that such a critical sector of our economy and important part of our communities would command the attention of lawmakers and policymakers.”

Less than a week later, we learn through a press release from the Edge Dairy Farmer Cooperative, which Holevoet also represents, that FDA Commissioner Scott Gottlieb plans to crack down on non-dairy products that use the word “milk.”

“An almond doesn’t lactate, I will confess,” Gottlieb said in a news story announcing the crackdown.

Well, neither does a coconut, yet the liquid inside the fruit is called coconut milk, and has been for a very long time. Will the milkweed be banned, since it also does not lactate?

This all sounds very politically correct and European to my ears. In fact, it was just one year ago when the European Court of Justice, which interprets law for the European Union, banned the use of the word milk for non-dairy products, on the basis that consumers could possibly be misled – and not, of course, because the sale of non-dairy milk continues to grow in Europe as much as it does here in the good old U.S. of A.

So why is this being pushed here? We are Americans. Do we really need nosy, possibly socialist, Euro ideas at play here? Is the dairy industry in such an identity crisis that it really needs this name all for itself?

We first heard about this concept last year when Sen. Tammy Baldwin introduced the DAIRY PRIDE Act – which was an acronym for Defending Against Imitations and Replacements of Yogurt, Milk, and Cheese To Promote Regular Intake of Dairy Everyday Act.

It seemed to me then, and it seems to me now, that it was a desperate attempt by a targeted Senator in a state that went red for Trump to play to an audience whose vote she would like to have in November. Her DAIRY PRIDE Act never made it out of the Senate Committee on Health, Education, Labor and Pensions.

You like to think it stalled there because some astute Senators didn’t believe that the average consumer is too stupid to know that cashew or hemp milk does not come from a cow.

To think consumers are that dumb is to show how out of touch with reality the goofs who make our laws really are. But, of course, they don’t really believe that cover story. Who would?

There is no need for this. It seems unAmerican for an industry to hijack a word for its own purposes. We are not idiots. We know the difference between dairy cheese, soy cheese, head cheese and political cheese.