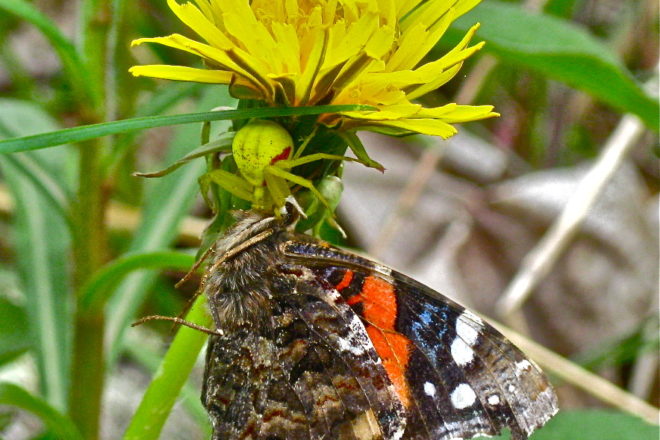 There was a consensus from a class of fourth graders, to the question, “What is Earth Day all about?” The answer boiled down to “cleanliness.” Their experience reflects a common impression that it has to do with picking up litter, cleaning up our towns, roads, and school grounds. One kid even suggested it’s about “cleaning up after old people.” Ouch!

This may be important, but it wasn’t quite the original intent. Gaylord Nelson is credited as one of the people who initiated Earth Day. A truly visionary Governor and Senator from Wisconsin, he was aware of “teach-ins” held mostly at college campuses during the Vietnam War. The purpose was to inform people about this ongoing conflict. His idea was simply to bring people together for a similar opportunity, but focused on our growing conflicts with our environment.

Each year on April 22, “teach-ins” could be held, whereby people are given opportunities to learn about our planet’s complexities, and the implications of our behaviors. Earth Day is now recognized throughout the world. Key issues back in 1970 included pollution, population explosion, species loss, and global warming. Sound familiar?

For Earth Day, my sister, Lora, asked me to help out at her school by taking kids on a discovery walk, and talking to them about Earth Day and what it means. Our main topic was habitat. Since the kids all live in one (it generally means “address”), I asked the class to explain what is most important in their habitats. They identified the basics: food, water and shelter. Many ecological definitions also include “cover,” places to nest, and space, which implies places to hunt, routes for migration, and “elbow room.”

We took the kids hiking on a trail through a small wooded area adjacent to the school, to explore habitats. We hoped to discover how they might be similar to and different from our own. The kids got up close and personal with flowers, leaves, buds, insects and spiders. Along the way we did a predator-prey activity, shared stories, and learned a couple unique plant names.

Children have a built-in affinity for nature, and they came up with a great idea: they thought every day should be Earth Day. There is a lot to learn if we want to reconnect to our landscape in meaningful ways. This starts with spending time in interesting natural areas. Ultimately it could lead to awareness and appreciation of our connections to and dependency on other living things.

Over the years I’ve asked many people who are into outdoor-related avocations and careers (conservation, gardening, sciences, etc.), when did you first develop this interest? Without exception they remembered being fascinated by nature as a young child. Chances are there was a parent or grandparent who encouraged exploration, discovery, and enjoyment of the outdoors. Often they had a nearby creek or forest in which to play or just watch the everyday activities of reptiles, spiders, insects or birds.

Connecting with nature need not include lessons on food chains, trophic levels, or energy cycles. It just requires curiosity and a little effort. We soon learn that we have a lot in common with other critters. Children simply need opportunities to disconnect from the World Wide Web, and then reconnect to the web of life. A good starting point is right outside the door. You can see more in a short walk than you will on a 100-mile drive. I remember as a kid in my parents’ yard, watching a spider trap an insect in its web and then subdue the “prey.” It was a little gross, but a lot fascinating. Then I noticed a yellow crab spider sitting on a yellow flower. You don’t need a degree in ecology to understand what that spider was up to. It’s likely that our ancestors learned how to fish with nets simply by observing spiders.

Unfortunately kids today spend more than a full hour less time outdoors (per day) than they did just 25 years ago, and that was less time than 50 years ago. There are numerous distractions today: a proliferation of programs and channels on TV, smart phones, computer games and social media. As our population expands, natural areas are in retreat. There is risk in this disconnect from the land. What we don’t know, we will neither value, nor protect, nor restore.

Gaylord Nelson understood the imperative behind environmental education. It isn’t just about scenery – it’s truly about survival. He pointed out: “Nuclear war is not inevitable, but major degradation of our environment with grave consequences is inevitable unless we reverse the trend.” The need to reduce our environmental impacts has gotten greater since Nelson issued that warning.

Gaylord Nelson also pointed out a critical shortcoming: “The most important environmental issue is one that is rarely mentioned, and that is the lack of a conservation ethic in our culture.” Not only do we lack this ethical perspective, too many of us think of conservation as trivial, inconvenient or merely cosmetic.

Cleaning up our act and connecting with life is a worthy goal for Earth Day every day.