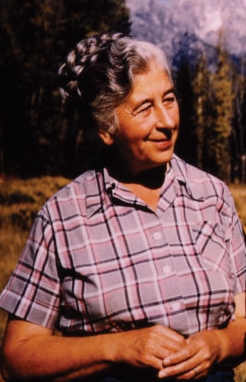 Margaret “Mardy” Murie (Aug. 18, 1902-Oct. 19, 2003) is considered the “grandmother of the conservation movement” for her work in passing the Wilderness Act and helping to create the Arctic National Wildlife Refuge. Public domain photo.

Margaret Murie, back in the mid-1950s, recruited Supreme Court Justice William O. Douglas to join her in a very important quest. Together they persuaded President Dwight Eisenhower to protect some eight million acres of northeast Alaska as national wildlife refuge.

A very special place, it is home to an amazing assortment of species. She and her late husband, Olaus (naturalist and author), had spent a lifetime exploring and studying the unique ecology of the Arctic.

She was among a very select few who were able to appreciate what a truly extraordinary treasure this area is. One of the most pristine landscapes remaining on Earth, it contains the greatest variety of plant and animal life in the circumpolar north. Included are the “ice age relic” musk ox, and three species of bears (black, grizzly and polar). The Porcupine caribou herd (120,000 strong) uses the area as a calving ground.

Today this special place has expanded to more than 19 million acres (thanks to Margaret’s persistence) and is now called the Arctic National Wildlife Refuge (ANWR).

Known as “America’s Serengeti,” this phenomenal ecosystem is home to 37 species of land mammals, eight marine mammals, 42 fish species and some 200 varieties of migratory birds, which converge here to nest from six continents.

But it’s not just the ecological significance that stirred Margaret to action. This wilderness is so rare in today’s depleted world that it is truly sacred ground. It represents something revolutionary, an example of our collective possibility to be good stewards of our living planet.

The political powers that be recently passed a tax bill that, among other things, threatens the integrity of ANWR. Because the underlying stratigraphy of ANWR contains petroleum, it is dollarable. True wealth is too easily overshadowed by dollar signs.

Some well connected donors may now be able to enrich themselves by undermining the spirit of “wildlife refuge” designation, while putting this treasure trove of life at risk. We’ve heard the chants of “drill baby drill,” from those who are not familiar with biological or climate science.

Crude oil is thought of as a resource, but in reality, like coal, it’s a reservoir, containing immense amounts of carbon sequestered away from the atmosphere. By burning oil and coal, and releasing carbon in the form of the greenhouse gas carbon dioxide, we have been relentlessly harming the entire planet. Denial of the catastrophic reality of global warming today is a good example of willful ignorance.

Lack of oil is not the issue. Nor is putting at risk one of the world’s finest natural areas the answer. The real issue is the damage we’ve already done to our environment. Developing dependable alternative energy has become imperative.

Throughout her long life, Margaret had witnessed increasing threats to the amazing varieties of life on Earth, coincident with the tripling of the human population. But she didn’t just wring her hands. Few have had the positive environmental impact that she had.

Besides her tireless efforts to protect ANWR, she and Olaus had been instrumental in making the Wilderness Act of 1964 a reality, and they founded the National Wilderness Preservation System. They knew the protection of life isn’t merely about aesthetics, it’s about survival (our own).

On Oct. 19, 2003, Margaret Murie’s light faded; she died at age 101. Now here we are in 2018. As days lengthen and life-giving light returns, let’s also bring back the enlightenment provided by people such as Margaret. We can all help keep her legacy alive by protecting and restoring our environment. It’s never been more important to support those with a track record of caring for our world – especially at the voting booth.

There are several environmental groups worthy of support, which you can Google. On a national level:  Natural Resources Defense Council; Sierra Club; Audubon Society; Wilderness Society; and Population Connection, to name a few.

Environmental and public health go hand in hand. Get involved.

Green Bay native Dale Goodner served as chief naturalist for Peoria Park District and retired as supervisor of Environmental Interpretive Services. He and his wife Mary now live in Algoma.