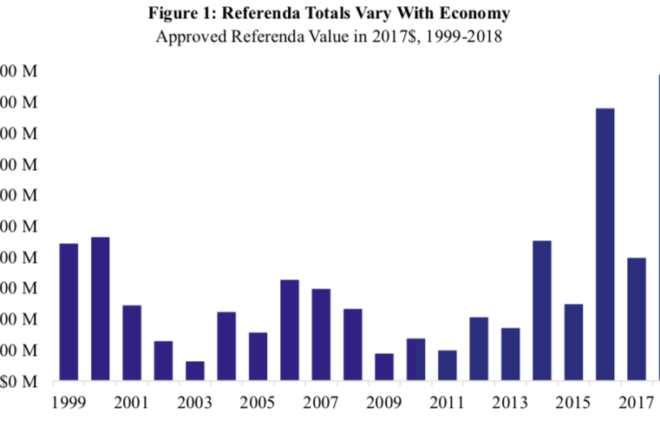 Just before the recent election, the Wisconsin Policy Forum reported that 2018 was shaping up to be the highest year on record for school referenda in terms of both dollar value and percentage passed. On Nov. 6, voters set records for both by passing measures to exceed state-imposed revenue caps and increase their property taxes.

The stage was set by an improving economy and indications that larger numbers of voters now favor spending more money for schools. We found that since 1999, the number of referenda on the ballot and the share of referenda approved have dipped during economic downturns and their aftermath, and risen during times of economic recovery.

In addition, polling by the Marquette Law School has found that since 2015 a majority of respondents have said increasing school spending is more important than reducing property taxes.

Heading into the election, 82 questions totaling more than $1.4 billion in debt and revenue increases were on ballots across 61 school districts statewide. According to unofficial results, voters approved 77 (94 percent) ballot questions worth $1.37 billion across 57 school districts. Forty-two are to issue debt totaling $1.2 billion; 21 are for non-recurring revenue limit exemptions adding up to $140.6 million during the time periods requested; and 14 are for recurring, or permanent, revenue limit exemptions totaling $26.1 million per year.

When combined with results from earlier in the year, these figures bring the passage rate for 2018 to 90 percent and total dollars approved to more than $2 billion. That makes 2018 the highest year on record in terms of the total dollar value as well as share of ballot questions passed. The number of referenda (157) is also the highest seen since 2001. As shown in Figure 1, 2016 held the previous record for highest dollar value of referenda approved, when voters passed an inflation-adjusted $1.76 million in additional school district spending.

The successful school referenda came amid a robust economy and record midterm election turnout. Unofficial returns show more than 2.6 million Wisconsinites voted – more than in any past midterm and equal to 59 percent of the state’s voting-age population.

The high dollar value approved is due in large part to the number of referenda designated for building new schools or significant facility renovations. Fifteen districts approved referenda in amounts totaling $30 million or more and only one of that size failed, a $36.8 million debt issue sought by the Viroqua Area School District.

More than 3,100 referenda have been placed before voters since the 1993-94 school year, when the state first imposed property taxes. Of these ballot questions, 61 percent were for debt, 23 percent for non-recurring increases to the revenue limit, and 16 percent for recurring revenue limit increases.

In total, the inflation-adjusted value of all approved school district referenda since 1993 is $16.9 billion. Thirty-five percent ($5.9 billion) of this total has passed since 2014.

As in the previous legislative session, lawmakers next year likely will consider legislation to add to state funding for schools, raise state revenue limits, and restrict when referenda can be held. These proposals all could affect the frequency and value of future referenda.

The direction of the economy also will play an important role. Should an economic downturn occur, referenda numbers and dollar values may again fall as they have done in the past.