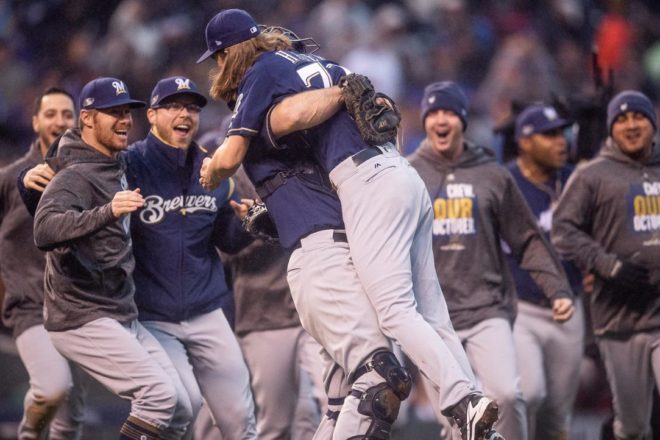 Brewers react to sweeping the Colorado Rockies on Oct. 7 and advancing to the NLCS. Dustin Bradford/MLB Photos.

Scrolling through Twitter last week, a highlight reel of the 1993 Wisconsin Badgers run to the Rose Bowl popped up in my feed. Terrell Fletcher to the left, Brent Moss to the right, and Darrell Bevell throwing to lumbering tight end Michael Roan up the middle.

My head went back to my 15-year-old self, and how improbable that run seemed at the time. The Badgers had been a laughingstock most of my life. It was a big deal if Camp Randall Stadium was half full on a football Saturday, and a single win in the Big Ten counted as a big deal. Twenty-five years later they’re a perennial power, supported by one of the nation’s most rabid fan bases, and producers of some of the best players in the NFL.

But as unfathomable as that Rose Bowl season was, there was another Wisconsin team whose ascension to the top of their sport seems even more impossible. In 1993 the Milwaukee Brewers low-balled their 15-year veteran star, Paul Molitor, and he left town for Toronto, where he promptly won a World Series. The Brewers would spend the next decade trying to sell fans on the likes of Kevin Seitzer, Jeromy Burnitz, and Geoff Jenkins. By 1995 attendance dipped to 1,087,000, fourth worst in baseball.

Things were so bleak in Milwaukee that rumblings of contracting the Brewers (and the Minnesota Twins) grew into serious conversations, possibly staved off only by the fact that Brewers founder Bud Selig was now the commissioner of Major League Baseball.

In 1998 the team came up with a new gimmick to draw interest. They switched from the American League to the National League to draw on nostalgia. (Hey, remember the Braves, the only team to win a championship in Milwaukee, they were in the National League. That’s exciting! Except that was 40 years ago, and they left town eight years later, but hey, new league!) Four years later they posted the worst record in team history.

That young version of me used to spend days at Mike and Mark Mueller’s baseball card shop in Egg Harbor. There was a reprint on the wall of the newspaper from the day the 1982 Brewers of Robin Yount, Paul Molitor and Gorman Thomas punched their ticket to the World Series. I stared at it every day, jealous of those old enough to have actually witnessed the best logo in sports at the top of the baseball world.

It seemed impossible to me then, and even more impossible for most of the 25 years to come. Yet somehow here we are, in Wisconsin, in October, watching a 96-win Brewers team taking the field in the National League Championship Series and feeling…confident?

If you are a Wisconsin sports fan born after 1985, you’ve been fortunate enough not to know Wisconsin teams as perennial also-rans, or worse. But those a little older remember a time when it was thought that free agency would kill the Packers, when UW – Madison was cutting sports to save money, and the Brewers were on the brink of going under. To those in this club, it’s remarkable how much the Wisconsin sports world has changed, and no team shows that more than these impossible Brewers.