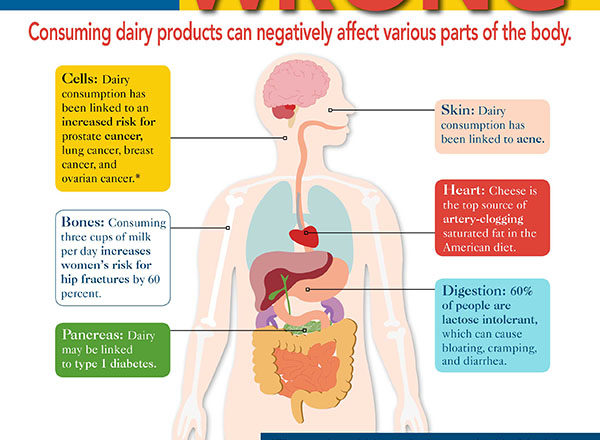 On Aug. 2 a press release came from the Edge Dairy Farm Cooperative, crowing about the defeat of a U.S. Senate amendment that would have prevented the Food and Drug Administration from outlawing the use of the word milk for anything except cow’s milk.

The original argument for hijacking the word “milk” was supposedly so consumers wouldn’t be confused, but even the dairy industry has come to realize that is a ridiculous argument, as evidenced by this comment in the Aug. 2 press release by Brody Stapel, president of the co-op’s board of directors and a Wisconsin dairy farmer:  “While most people who consume plant-based beverages may understand they are not actually drinking milk, there is still confusion surrounding the nutritional value of these products. Milk is associated with a certain nutritional profile and it is both unfair and misleading to label other beverages milk because they lack the protein and vitamins the public associates with cow’s milk.”

But does cow’s milk really do a human body good?

“There is certainly the argument that a mother’s milk is good for whatever species it is. So a cow’s milk is perfect for a calf,” said Susan Levin, a registered dietitian and director of nutrition education for Physicians Committee for Responsible Medicine, a nonprofit of 12,000 doctor members. “There is no other species on this planet that drinks his or her mother’s lactation after weaning, much less turning to another species for that source of nutrition. For that reason, there are a lot of health issues drinking anyone’s milk after a certain age. We don’t need to be drinking cow’s milk or any milk after a certain age. The fact that they want to usurp a name like milk is completely ridiculous. With such a narrow definition, what do you tell a human lactating mother? Don’t call it milk anymore, because only bovines have milk?”

Levin points out there is growing research about the negative impacts cow’s milk has for the human body, which begs the question, why would the federal government be complicit in stealing the word milk solely for use by the dairy industry when there is ample evidence that milk does not do a body good?

“It is a 100 percent money-driven decision with zero interest in human health or how this might impact human health,” she said. “It’s crazy what they will do to hang on to what they have got, but trying to literally change the English language to make a few dollars at the risk of human health, ridiculous. We’re going to pretend that science isn’t real and money is more important. Maybe that’s nothing new, but it is frustrating. Americans are not in a position to tiptoe around health and good dietary practices. Everything we die from or suffer from in this country is pretty much related to our diet.”

The most obvious problem with cow’s milk is lactose intolerance.

While lactose intolerance can pose significant health issues, Levin decried the pedestal cow’s milk has been placed upon in this country. And “the fact that people are pervasively and systematically told to drink this substance at school, at every turn, you need this. They are swept up in a system where they constantly feel ill because they are told they need to do this.”

She said other big health concerns for children drinking cow’s milk include ear infections, iron deficiency, and the potential for type 1 diabetes to develop in children exposed to cow’s milk in the first year of life.

“This is why the American Academy of Pediatrics says no one under one should be given cow’s milk,” Levin said.

Several large-scale, long-term studies have identified cow’s milk as the culprit in a number of adult maladies as well, including cardiovascular disease.

“The number one source of saturated fats in our diets is dairy. For kids it’s specifically fluid milk,” Levin said. “Saturated fat, as we know, is associated with heart disease, the No.1 killer of Americans. So why would we be consuming a product that is full of the factors that lead to that?”

Last year the American Heart Association (AHA) issued an advisory on dietary fats, recommending that saturated dietary fats be replaced with polyunsaturated vegetable oil to reduce the risk of cardiovascular disease. The AHA advisory referred to randomized controlled trials where saturated fats were replaced with polyunsaturated vegetable oil, which reduced the occurrence of cardiovascular disease by 30 percent “similar to the reduction achieved by statin treatment.”

An 18-year Harvard Nurses Health Study that followed more than 72,000 women proved that dairy consumption has little or no benefit for female bone health. In fact, it may have a negative effect, for the Physicians Committee for Responsible Medicine reports that “women who drink three or more glasses of milk per day have a 60 percent increased risk for developing a hip fracture.”

And then there is the milk-cancer connection.

“Among adults milk is linked to cancer of the reproductive system, specifically prostate and breast cancer,” Levin said. “The relationship to prostate cancer among men is so great the Harvard School of Public Health says men shouldn’t be drinking cow’s milk because there is such a connection to prostate cancer.”

The original thought was that the milk-cancer link was related to the fat content of milk, but Levin said male drinkers of low-fat and no-fat milk were also getting prostate cancer. She said that brought more attention to naturally occuring bovine hormones which are designed to make the cells of calves grow. Could they be triggering cancer cell growth in humans? Levin suggested there might be a link to cancer and the calcium in cow’s milk.

“We shouldn’t be consuming a product with a link like that, especially when we don’t need anything more than water at a certain age,” Levin said.

Instead of ingesting a saturated fat- and hormone-laden product like cow’s milk, Levin suggests you get the same nutrients where the cow is supposed to be getting nutrition – by eating greens.

“Eat your greens and you will get twice the absorbable calcium as milk, from kale and cabbage and broccoli and collards. But it’s also in beans and grains. There are plenty of places to get those as well as vitamin A and D. Those aren’t even naturally occuring in milk. They are added in the factory.”

While the dairy industry and federal government are complicit in promoting an unhealthy product, Levin is encouraged by news from the Plant Based Foods Association, a trade association representing 114 of the nation’s leading plant food-based companies, which reported via an Aug. 2 press release that the plant-based food industry saw dollar sales growth in the last year of 20 percent, adding up to $3.3 billion in sales.

“The new data confirms what we are hearing and seeing every day from our members: sales are up, investment is increasing, and new jobs are being created in the plant-based foods industry,” said Michele Simon, executive director of the Plant Based Foods Association. “It is important that regulators and legislators treat our industry fairly and the playing field for plant-based foods is level and fair at the state and national levels.”

“All we have as advocates of healthier diets are the facts we have to keep pushing,” Levin said. “Just like with the tobacco industry, it took a long time for people to catch onto science. Maybe science isn’t that sexy, but eventually, you can’t ignore the facts.”