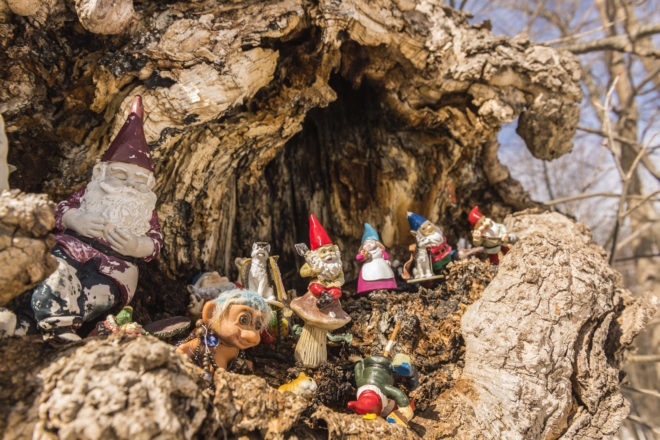 The inhabitants of the Gnome Tree are – for better or worse – more famous than they used to be. Photo by Len Villano.

A few months ago, I read a story on the ethics of restaurant critics. It was not about the morality of a stranger with a pen imposing a subjective opinion on an establishment to the potential ruin of its operators and employees. Rather, it concerned the way in which a popular writer can go to a relatively unknown locale, stamp “Best Burger” on the front, and leave feeling satiated and virtuous for sharing a slice of delicious with the world.

In this particular example, a burger joint in Oregon had to close after receiving the above title from a popular national website. The influx of customers left the humble, local dive with long lines, burned-out staff and, in turn, dissatisfied customers.

I fear I’ve done the same, albeit with gnomes in a knotted tree on a quiet corner in Door County.

In the early-summer 2018 issue of our sister publication, Door County Living, Myles Dannhausen Jr. and I told the stories of places in Door County that often left passersby scratching their heads in puzzlement. The series, “Curious Door,” was popular.

I spent just a few paragraphs on the story of Fish Creek’s gnome tree. In short, a family’s inside joke prompted our anonymous source to place tiny gnomes in the knot of a tree outside of Fish Creek.

Only a keen observer and frequent passerby of the tree would ever notice. That is, until last year when I foolishly opened my short piece with, “On the northwest corner of County Highway A and Gibraltar Road in Fish Creek …”

A few weeks ago, I drove past the corner and was disappointed to see dozens of new figurines overtaking the once inconspicuous display. Gnomes rubbed elbows with Power Rangers, and other figures just lay haphazardly at the base of the tree as if Toys “R” Us didn’t know what to do with the remainder of its unsold inventory.

It is still a curiosity, but in a way that denotes unkemptness and not the subtlety of a local entertaining herself on the way to work. It surely doesn’t look like, as one person hypothesized, “the wood fairies did it.”

Thus is the self-aggrandized dilemma of the journalist: striving for a story readers will love while being fearful that this very love will ruin the story.