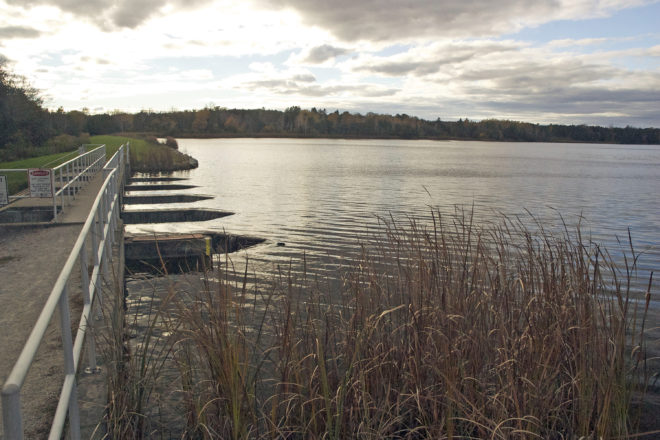 Members of Door County’s Land Conservation Committee learned at the Nov. 16 meeting that the Forestville Millpond has lost 94 percent of its capacity since its bottom was last mapped 43 years ago.

“So it’s very shallow,” said Brian Forest, a conservationist in the county Soil and Water Conservation Dept., who presented a snapshot of the lake management study results the department has collected on the millpond this year. A final version of the report will be presented in January, with a public meeting to follow.

The report on the accumulated sediment in the millpond was not a shocker. The county has been aware since a 1996 report on a two-year study that the 72-acre millpond was in a state of eutrophication, largely due to nonpoint sources of pollution from the cropped farmland surrounding it (then it was identified as 7,612 acres or 60 percent of the watershed; Forest is still crunching numbers on what it is today).

One of the stated goals of the management plan for the Forestville Millpond was to do what is called a bathymetric survey – the underwater equivalent of a topographic map – to determine the amount of sediment that has settled in the millpond since the last bathymetric survey in 1974. That’s when it became very clear that the millpond has been collecting huge amounts of sediment.

Last November a well-attended public meeting was held at the Forestville Town Hall to discuss the county’s study and garner interest in the project from those who live near the millpond or in the Ahnapee River watershed, which the millpond is part of.

The planning grant received by the county required public input on the millpond, so beyond last year’s meeting, a survey was sent out to 997 households in the watershed, with 316 returned.

While there were a lot of “unsure” responses to questions about management decisions, there was a very clear response to a couple of questions.

Respondents strongly disagreed that the county should continue to do nothing about the millpond, and strongly disagreed to the idea of removing the dam and allowing the Ahnapee River to become an uninterrupted stream (a dam was first erected at the site in 1878 for a grist mill to process wheat from local farmers).

There was also a strong positive response for improving the fish habitat of the millpond.

A plant survey was also a part of the study. The public perception, according to the survey responses, is that there is too much non-algae aquatic vegetation in the millpond, but Forest said after testing 346 sites, “There’s not much growing in there.”

The team found vegetation at only 130 of the test sites, mainly the invasive Eurasian water milfoil.

Forest said on blustery Halloween, the team collected six core samples to determine the makeup of the sediment. Those samples were sent for testing to the state laboratory, where the bulk of the funding for the project to date will be spent – $16,000 for core sample testing. But those results will help determine what the next steps will be. If the decision is to drain and dredge the millpond, they will have plans in place to deal with possibly polluted sediment.

Forest said the Soil and Water Department will provide analysis and conclusions in the final report that will go to the Land Conservation Committee at its next meeting on Jan. 18.

County Conservationist Erin Hanson informed the committee that the department was approached by the DNR about a watershed planning grant of $20,000 to fund staff time to focus on the Ahnapee River watershed upstream of the millpond in an effort to improve the water quality of that impaired waterway.