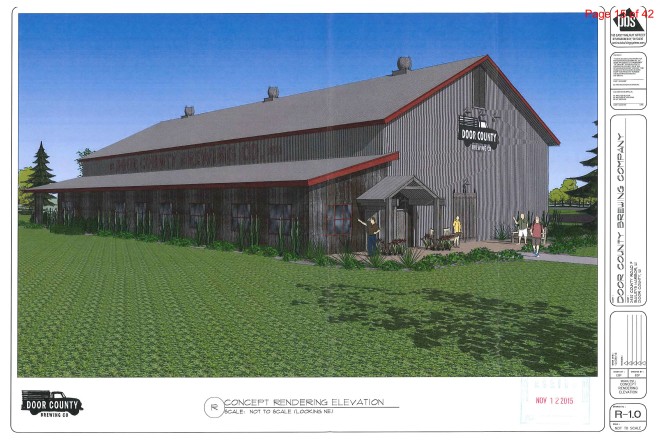 An artist’s rendering of the proposed Door County Brewing Co. in Baileys Harbor.

Door County Brewing Co. is one step closer to opening a brewery capable of producing 25,000 barrels (or 775,000 gallons) of beer annually just down the road from its existing tasting room and mini-brewery in Baileys Harbor.

A conditional use permit for the brewery proposal was approved at the Dec. 3 meeting of the county’s Resource Planning Committee.

The approximately 11,118 square foot building would be built on two vacant lots located between County F and Harbor Parkway, just northeast of the intersection of County F and EE, an area already zoned commercial.

Brewery owner John McMahon explained to the committee that it now does the bulk of its brewing at Sand Creek Brewing on the other side of the state in Black River Falls. The new building would be used solely for the production of beer, he said. 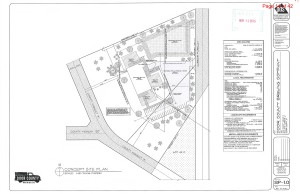 “We wanted to keep it as rural feeling as possible,” McMahon said. “The design looks more like a barn than an industrial building. It might be part of the agricultural scenery.”

In keeping with that feeling, McMahon explained that he has already worked out an agreement with Premier Concrete, Inc., to use its existing Harbor Parkway for access to the brewery rather than creating a separate entrance and more asphalt.

“We wanted to leave the entire front of the building green,” McMahon said.

Asked by committee chair Ken Fisher if this expansion will create jobs, McMahon said it would add 13 full-time jobs to the five full-time positions already created by the 2½ -year-old brewery.

McMahon also explained that he is working with the Wisconsin Department of Natural Resources to put in a well. The well water would be treated by a UV system, charcoal filter and reverse osmosis.

“We have a water conservation program in there that minimizes the amount of water we use,” McMahon said, adding that the state of the art brewing system they will use will maximize efficiencies.

Committee member Dave Enigl asked what happens to byproducts of brewing. McMahon explained that the only byproduct is spent grains, which are picked up by area farmers to use as feed.

The county Planning Department suggested 15 conditions the RPC should apply to the conditional use permit, some of those standard to any RPC approval and some specific to this business. One of those was restricting truck traffic to the brewery to the hours of 8 am to 6 pm.

The committee ultimately decided to set the delivery hours from 6 am to 10 pm.

One person – the proposed brewery’s closest neighbor directly across County F – spoke against the plan.

“Has anyone done any research on how much water our aquifer can ship out?” asked Katherine Geurts. She said if the brewery just produces 10,000 gallons of beer a year, that is “310,000 gallons of water leaving Baileys Harbor. That is an outrageous amount.”

Saying she was concerned her own well would dry up with such high water usage across the street, she asked the committee to add another contingency, that the brewery be required to have a high-efficiency well.

Geurts also worried that any blasting done in connection with the brewery construction might damage her own house, but was told that is the responsibility of the state-regulated blasting company.

She also questioned where the 13 new employees would live since housing is so hard to come by in Northern Door.

Ultimately, the committee voted unanimously to approve the conditional use permit with the conditions. The proposal now goes before the full county board.

The committee also approved a text amendment to county zoning that allows for the cutting of woodland plantations – or trees that were planted as crops – for other permitted agricultural uses. The change came as a result of Tom Lutsey of Waseda Farms buying the 120-acre former Logerquist farm earlier this year and wanting to clear out the inner portion of an 18-acre pine plantation for winter pasturing of his Black Angus cattle, with a pine buffer protecting them.

Lutsey explained to the committee that former owner Jim Logerquist and his then-wife planted the pines 35 years ago “with every intention to cut down and sell them.” He suggested the county had made a mistake when it failed to exempt tree plantations, along with orchards and nurseries, from more stringent woodland regulations.

Don Freix of Fish Creek was the only person to speak against the text amendment. He said he was not against Lutsey’s proposal, but against “a global relaxing of the thing” with the growth of CAFOs. He suggested the change could have long-term consequences by allowing agricultural landowners to clear-cut plantations to start cash crops where CAFO farmers desperate to unload their excess liquid manure can spread the waste.

Lutsey’s Waseda Farms is certified organic, so in his rebuttal to Freix’s objections, he said he didn’t disagree with his views on CAFOs, “We’re doing it naturally….We don’t agree with spraying manure. We work with Soil and Water. We don’t do anything they say we can’t do.”

“I think every individual request needs to be monitored for public health,” Friex said. “That’s my main concern, groundwater pollution in sensitive places.”

After much discussion, the committee approved the text amendment, but with the stipulation that the Planning Department come up with a solid definition of a tree plantation.

Department head Mariah Goode said she would obtain the definition from Webster’s Third International Unabridged Dictionary for the next committee meeting, which is at 2 pm on Dec. 17.