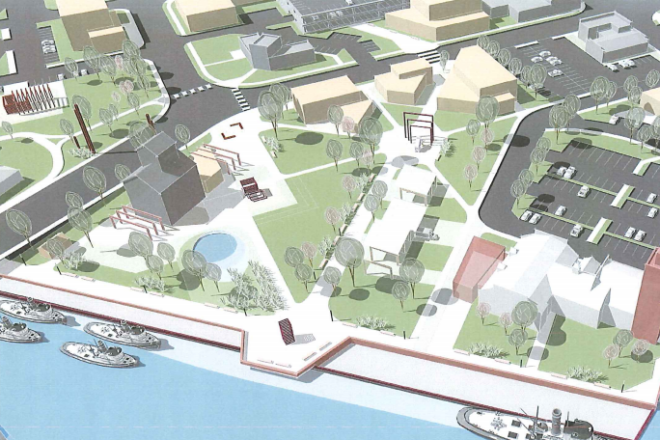 The proposed plan for the west waterfront in Sturgeon Bay would move the Granary to the foot of the Oregon Street Bridge to open view corridors from the back side of the property.

The Sturgeon Bay Common Council got its first look at a new vision for the West Waterfront Tuesday night when the Ad Hoc West Waterfront Planning Committee presented a new proposal for the centerpiece property that has been stuck in neutral for nearly a decade.

Committee member Erich Pfeifer said the goal of the plan is to “foster a sense of community pride” after years of fighting over the property.

“Today let’s put that all behind us and focus on our plan,” co-chair David Schanock said. He noted that though many people are averse to change, “For a city to progress into the future, some properties need to be redeveloped” in the pursuit of making the city a grand gateway to Door County, increasing the tax base and invigorating the west side and the city.

The committee’s concept plan retains the Teweles and Brandeis grain elevator on the property but moves it to the edge near the Oregon Street Bridge. That would open a view corridor and couple with the proposed Door County Maritime Museum Maritime Tower to frame the west waterfront.

But the move does not sit well with some members of the Sturgeon Bay Historical Society (SBHS). Its president, Christie Weber, has said such a move would violate the society’s development agreement with the city that called for moving it to its original location, jeopardize its status on the National Register of Historic Places and cost the city considerable funds.

An anonymous donor has agreed to pay for the granary’s rehabilitation and its move back to its original location. If the city wants it moved, it may have to foot the bill, and it would also have to pay for foundational pilings at its new location.

SBHS treasurer Kelly Catarozoli outlined several aspects of rehab work that the society has underway and said a location change would come at considerable cost and delay.

“We’ve been working hard to abide by the contract we’re bound by,” she said.

Trudy Herbst, director of the Door County Historical Society, praised the plan and noted that moving the structure on the parcel would not automatically cost it its status on the National Register of Historic Places. She pointed to the Lower Range Light at The Ridges Sanctuary as an example of a structure that was moved but retained its status on the registry. The light was moved 15 feet within the same property.

Earlier West Waterfront plans pushed development toward the water. The new plan pushes development off the waterfront and up to the streets to retain the character of the existing streetscape and maximize public space. In 2015, the city unveiled a plan that included a 90-unit waterfront hotel as the centerpiece of development on the property – a plan that met with derision from many in the city and set off years of lawsuits and tension at City Hall.

The new plan pins hopes on diversified, smaller-scale development of residential units, shops, restaurants and entertainment located explicitly to maintain, rather than wall off, waterfront-view corridors.

The committee identified the property between Glas Coffeehouse and Bayside Bargains on Maple Street as the highest-priority lot for development. It recommends acquiring the lot or encouraging developers to acquire the lot. It also suggests building residences on a portion of the parking lot for the Sawyer Park boat launch on Neenah Avenue.

Like earlier plans, the new vision would establish a waterfront promenade connecting other waterfront walkways to create a continuous path from Otumba Park to Sawyer Park. This would be enhanced with prominent signage along the walkway – something the Sturgeon Bay Visitor Center is already working on enhancing.

Much of the downtown waterfront on the east and west sides is publicly accessible already, but there is little signage to pull pedestrians to the paths or welcome them in. It would also route the Ice Age National Trail and Ahnapee State Trail to the site and create a trailhead to take advantage of the proximity of the trails.

The plan keeps the Tug John Purves and other working tugs on the West Waterfront, but it encourages more flexibility in future agreements with tug operators that would call for maximizing view corridors and allowing for dock-wall configurations that accommodate public access and working waterfronts. It would also free up some of that dockage for visiting large vessels such as tall ships, Coast Guard cutters and cruise ships.

Schanock urged the city to begin work on the waterfront promenade as soon as possible to improve the property and encourage development.

“Developers need to see that the city is invested in this,” he said.

Mayor David Ward said his first impression of the plan was positive.

“The basics of that plan are a good foundation for us to move on,” he said. “I especially agree that we need to move on the walkway right away. We’ve got some grants to start on it and if we can work on the lease with the tugboat operator that would be a piece that could give developers an idea of what it’s going to look like.”

The committee paid particular attention to getting creative with parking on the west side. The area is heavy on large parking lots on or near the waterfront that sit largely empty for most of the year.

The plan encourages the city to work with area businesses to share parking spaces, reconfigure the Door County Maritime Museum lot for more efficient parking and negotiate with the Harbor Club Marina to reduce the size of the parking lot at Madison and Locust Street to make room for additional residential development.

To help make up for eliminating parking closer to the water, the plan proposes building an 88-space parking structure behind Bayside Bargains at the corner of Neenah and Madison Avenue.

Committee member Stephanie Trenchard said public art is the “jewel of the whole property” and will add value to the park and surrounding properties.

The plan proposes a water feature with a play amenity for kids, multiple gateway elements to welcome and invite people to the park, and consideration of public art throughout the area. It suggests a flexible, pavilion-like structure that could be reconfigured for different types of events, rather than one large event space.

Co-chair Laurel Hauser, a vocal proponent of preserving the granary, said the plan is a compromise she hopes the city can get behind.

“None of us will get everything we want,” Hauser said.

The plan still needs to be reviewed by the council and Plan Commission, and it will be put to residents at a public hearing at the council’s first meeting in August before it can be approved.