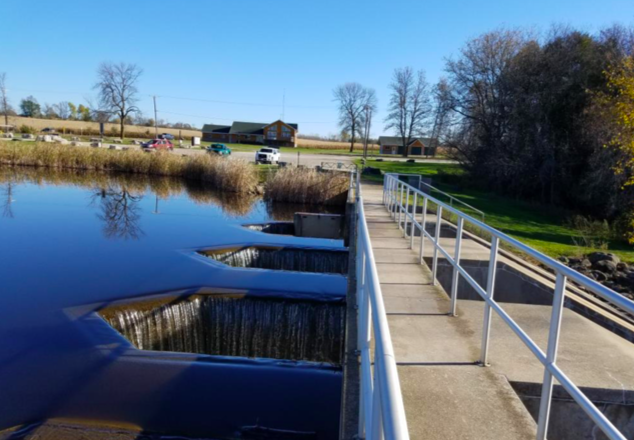 Two county committees accepted the recommendation of the Soil and Water Department and voted unanimously in favor of an extended drawdown of the Forestville Millpond.

At a joint meeting of the Land and Water Committee and the Parks and Facilities Committee on Dec. 5, supervisors heard from county conservationists Erin Hanson and Greg Coulthurst about the various options for dealing with the millpond and how they arrived at the extended drawdown as the most economical and feasible of options.

Things really began in 2017 with a stakeholder survey that was sent out to people who live around the millpond. Stakeholders were not interested in a couple of the options, including removing the dam, which would turn the water flow into a stream, and doing nothing.

The stakeholder group convened three more times this year for discussions on the options. Hanson said her department’s recommendation for the extended drawdown was based on the stakeholder input, data collected as part of a lake management planning grant and a recent visual inspection of the dam that determined it is in sound condition.

“Overall, it’s in good condition,” Nelson said. “In terms of estimating its longevity, it could be another 50 years with proper maintenance and upkeep.”

There are some updates needed, including a safety harness for a park employee to operate the sluice gate, and some patching needed on the walkway.

The engineering firm reported that the visual inspection indicates the county is doing a good job of maintaining and monitoring the dam.

Nelson added that if the extended drawdown is approved, that will allow for a better dam inspection.

When Supervisor Ken Fisher, who chaired the meeting, called for citizen comments, Village of Forestville Trustee Lora Jorgensen was the only person to speak up.

She said the Forestville community sees the millpond as a diverse system that includes wildlife refuge, fishing and bird hunting.

“What most people don’t understand is it is also a nutrient catch basin for the watershed, primarily for agricultural use,” she said, describing the millpond was a great way to manage the watershed and prevent nutrient overloads from passing downstream into Kewaunee County and eventually into Lake Michigan.

She said land in the Forestville area and around the watershed is being used by some of the large Kewaunee County farms to spread excess manure, and that as recent as the day before the meeting, manure was being spread on a field of standing water, prompting a visit from a DNR warden.

She said it could be a hard winter, and suggested it would be a waste of money to do anything to the millpond before that.

Hanson later explained that if the drawdown were approved, it would not begin until next September, after the DNR finishes its longterm monitoring for the Total Daily Maximum Load study being conducted for all the northeast Wisconsin rivers that empty into Lake Michigan.

Coulthurst said the best option for the 94-acre millpond would be the gradual extended drawdown. He said they have determined there is about a foot of sediment on the millpond bottom.

There had also been extensive discussion of a dredging option, but Coulthurst said they estimated the cost of just dredging the 35 acres the county owns. The trucking costs of removing one foot of sediment would amount to about $500,000, and if they did the rest, “We’re talking about a very large amount of money.” And, he added, it would not resolve the sediment problem, and it would need to be dredged again.

Coulthurst said they expect a two-year drawdown would compact the sediment by half.

Supervisor Richard Virlee pointed out that there has been past discussion about where the millpond sediment is coming from and wondered if that is included as part of the plan?

“We consider that part of our core work,” Hanson said, adding that is an ongoing part of their work and a complementary effort to the drawdown.

Supervisor Dan Austad made a motion to accept the drawdown recommendation, but said in two years time a new county board might decide not to refill the millpond.

Corporation Counsel Grant Thomas pointed out that any decision made by the board can be revisited and changed, but this specific recommendation is what must be considered now, and that is to drawdown and refill in two years.

The idea of leaving the recommendation open-ended prompted DNR fisheries supervisor Tom Meronek to say that the DNR would not be interested in getting involved in any project that was left open-ended and that the public would be confused if the board did not make a decision one way or the other upfront.

Ultimately, the recommendation was approved by both committees and now goes to the full county board on Dec. 18. The next day, Dec. 19, a public meeting will be held on the millpond at 6 pm in the Forestville Town Hall.