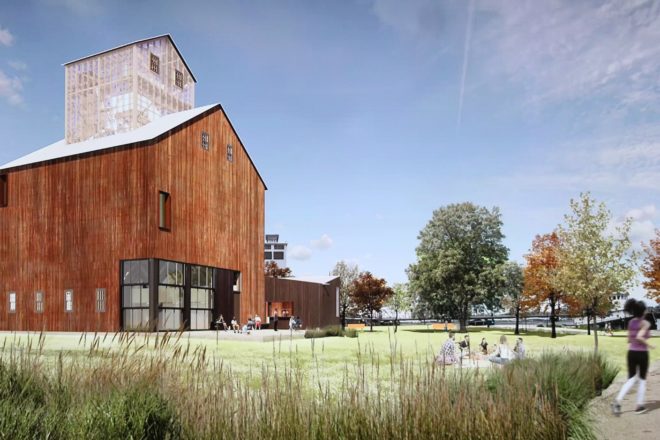 This rendering shows what the Door County Granary will look like from the outside upon the restoration project’s planned completion next year. Photo by Kevin Boneske.

The Sturgeon Bay Common Council heard July 19 about the progress to restore the Teweles and Brandeis grain elevator on the city’s West Waterfront.

“All columns have been installed, and we’re in the process of setting the granary back down on its legs to its final height,” Matson said.

She said the building is being braced to lower it safely onto the columns, which should happen in the next two weeks.

Matson also said fundraising for the project is ongoing, with the Nelson Family Fund in the Fox Valley expected to contribute $100,000 to help preserve Sturgeon Bay’s agricultural history.

“Our current appeal has raised approximately $150,000, including a private donation of $60,000 from philanthropists who are contributing to a Sturgeon Bay project for the first time,” she said.

The Door County Granary’s architect, James Dallman of LA DALLMAN Architects, appeared at the meeting via Zoom and presented drawings of what the project will look like upon its scheduled completion next year.

Dallman said the granary’s original material included steel siding, which the Sturgeon Bay Historical Society Foundation (SBHSF) recently found and acquired from a granary that had been torn down in Superior.

“It was from the same era, the same profile of corrugated steel, and we’re quite excited that we’re going to return the granary not only to its original position, but much of its original material character,” he said.

Dallman said the reclaimed siding will cover much of the lower levels of the granary, with polycarbonate siding used on the upper-level headhouse to bring in daylight and also view the machinery in that space.

“New openings are being placed on the lower level, and those will be accessible, both visually – to see through the project – but also are operable, so that we’ll have five big openings that can open up during use or seasonal events to make that ground floor very accessible to the public – open to views of the bay, open for events,” he said.

Dallman said the large openings will have three sections with triple-hung windows (windows with three panes of glass).

A small plaza terrace will be constructed on the north side of the building, framed by an addition with a service window.

“We’re very excited about this because it culminates the original intent, which was to return the granary to its original condition to the extent possible,” he said.

Dallman said the second phase of the project will include stairs and a small lift to get the public up into the upper levels of the granary, and eventually to the top.

“Phase one will be for use to open to the public, and then phase two will be all those upper levels beyond the first floor,” Matson said.

In accordance with the development agreement the SBHSF has with the city, she said the granary’s lower level should be open in April, with fundraising continuing to open up the rest of the floors.

Because of delays in obtaining construction materials, the common council agreed May 3 to grant the SBHSF an 11-month extension to have the project “substantially completed” no later than April 30, 2023.