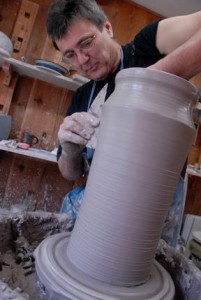 Thor Thoreson at the wheel.

For over 30 years, Judi and Thor Thoreson have worked collaboratively, as artists, as husband and wife, and as active community participants. They reside in an historical building, participate with the Ellison Bay Arts Group, and offer a newly-completed brick oven, perfect for wood-fired pizzas, to the community once or more a month.

“We did it with an eye for the community,” says Thor of the outdoor brick oven, not yet marked with black soot and smoke stains. Thor and Judi sit on plastic white chairs in their open lawn, brightened by a few flower gardens and large clay pots in hues that denote the distinct glaze palate for which Gills Rock Stoneware has become recognized.

“You can spot our work easily,” says Thor, not only by the luminous color scheme and decorative motifs – floral designs, pears, apples, cherries, herons, and Door County seascapes – but by what Thor calls the “sculpture-like quality” of their pieces.

Because of the Thoresons established nature as artists, one may assume that their love and creation of art began at an early age – both however, did not even take a pottery class until late in their college careers at Luther College.

“I was always interested in art,” remembers Thor. Not until his junior year of college, after nearly completing a political science major, did Thor register for an art class.

What drew him to this craft, however, was not his natural ability, but the challenge of the media – “it wasn’t easy” to learn, he says. “Learning to throw is like playing the piano; it looks effortless until you sit down to play.” 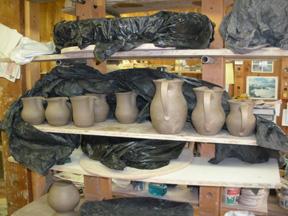 Drying pots and pitchers at the Thoresons’ studio.

Judi’s major was focused elsewhere as well. She was a senior, double majoring in English and Sociology, before she took a pottery class and met Thor.

“I don’t throw like Thor,” she says. “I decorate pieces and have learned a lot from him.”

Thor went on to study with renowned, Bauhaus trained potter Marguerite Wildenhain in California, a suggestion from a respected professor who recommended his ‘serious’ pottery students study with Wildenhain.

“She had a profound influence on me,” says Thor. “Not just artistically, but personally.”

Thor began business in Ridgefield, Illinois before relocating into the loft of a commercial fishing shed in Gills Rock – “hence the name, Gills Rock Stoneware,” Thor laughs. For 10 years, the Thoresons rented the second floor of the building, comparing it to a trampoline – not exactly a good location to comfortably shelve an array of clay pots. Meanwhile, Judi worked at a junior high in Illinois, teaching language arts and commuting back and forth to Door County for the weekends and summers.

In 1989, the Thoresons found their current residence in Ellison Bay. Gesturing to the blue building behind her, “This place is special,” says Judi. “We knew we needed to have it.”

She tells of its original purpose – a hotel and saloon in the 1800s – and its use as a general store in the 1930s, owned by Ed Everson. 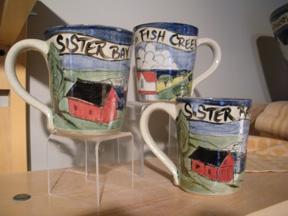 “There are a series of rooms on the second floor, which must have been where guests stayed,” she reports. Then pointing towards a rotting row boat, gray from age and sunken into the grassy earth, she tells a bit of village lore – “That boat was bright red, and Ed Everson, who had thirteen kids, apparently, would take it to the water with his dog to get away. People come and ask about the boat and take pictures.”

Now the building houses and represents an established, collaborative artistic effort by the Thoresons and a number of employees.

“The pieces go through a lot of hands,” says Thor. The employees “do various aspects of production, mostly decorative – everybody has their own strengths and we try to match them accordingly.” He winks when he adds, “Nobody has any weaknesses.”

Judi manages the shop and decides what needs to be done.

From there, Thor throws the necessary, functional pieces from a combination of white stoneware clay and porcelain.

“I was trained as a functional potter,” says Thor. “My instructors strained that point and it is so nice to hear of people using your pieces.”

Once the pottery is leather-hard (the half-dry state of clay), the artists begin the decorating process and then allow the pieces to air dry. Firing occurs next, then glazing, and finally, another firing to complete the process.

“The quality is very high here,” says Thor, not in regards to his pottery personally, but rather to that of the many Door County potters. “Door County is known as a place to shop for or experience pottery.”

“There is a nice camaraderie among the potters,” says Judi. “Of course we are in business, but it isn’t cutthroat or extremely competitive.”

In fact, the Thoresons display a diverse collection of art from other Door County artists.

“We are firm believers in collecting others’ art, paintings and pottery,” says Judi. “We embrace everyone.” 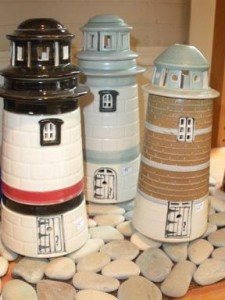 This is a statement that translates to many aspects of the Thoresons’ lives. Whether attending an Ellison Bay Arts Group event, a community play featuring Thor, or just a backyard cookout, one is likely to encounter the Thoresons active and enthusiastic participation.

Sally Slattery, a recent Winona State graduate, currently interns for the Peninsula Pulse Arts and Literature section. A visitor to the Door County area since she was a young girl, this season marks Slattery’s second to reside in the county.