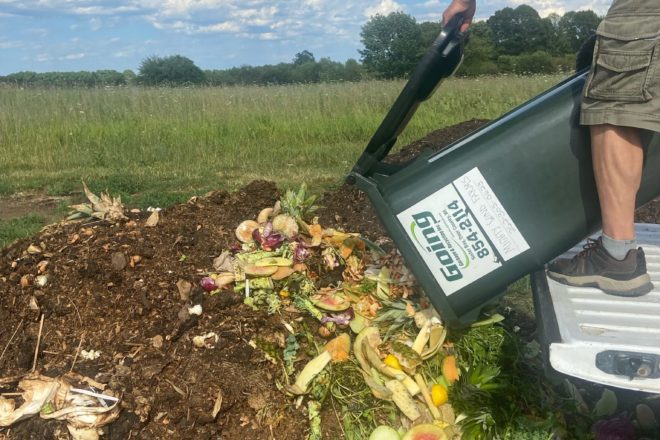 A Climate Change Coalition (CCC) campaign to make a difference for the community, the air, the land and the planet continued to gain traction this year.

By late summer, the Door Community Compost Initiative included 10 sites, from a site in the Town of Gardner in the south to Gathering Ground on Washington Island. Representatives at each of those pick up and/or accept drop-offs of non-meat kitchen scraps.

Jeff Lutsey, CCC executive director, led by example, collecting eggshells and vegetable-prep scraps from two local eateries and setting up a circle drive and drop-off site on his property on Grove Road west of Highway 57.

“My goal is to be a deposit site, for sure for my little neighborhood,” Lutsey said. “If you have your own land, that’s the easiest way to compost. But if you don’t, come and dump your stuff on my little pile.”

“I’ve been pilot-programming this. For two years running, I’ve been seeing what I can do with my pallet system,” he said of a line of corral-like composting frames he built out of used wooden pallets. He said he thinks he can take five-gallon buckets of non-meat food scraps from up to 30 people weekly, and then use a hay fork to turn over the compost pile properly every couple of days.

Late this summer, he set up a circle drive alongside a lane he mowed into the field north of his small, energy-efficient house.

Lutsey said he received a lot of information about composting from CCC Steering Committee member and longtime composter Dave LaLuzerne. Also, he witnessed how large-scale composting helped to build deeper, richer soil in gardens at Mighty Wind Farms. Lutsey said he considers Dan and Char Fatke at Mighty Wind to be his heroes for how they’ve kept scraps out of the landfill and built better soil through composting. They’ve inspired Lutsey and others to expand the effort as much as possible.

“For all of us, 10% or 20% of garbage is these food scraps,” Lutsey said. “That should not go down to the landfill in Appleton. It should just go back to the earth.”

LaLuzerne said interest grew this year. Northern Door–based Going Garbage discussed starting a pickup or drop-off service for compostable scraps. In addition to 10 current sites, LaLuzerne has a couple more property owners planning to host sites by the spring of 2023.

At farmers markets this summer, the CCC sold five-gallon buckets for $25 donations. The buckets weren’t for making compost, but rather, for collecting scraps to drop off. The coalition provided farmers-market visitors with literature about the countywide drop-off sites as well as how-to tips.

“A lot of gardeners have their own compost piles. What we’re doing is trying to help people who don’t have compost piles or don’t have any way to do it,” LaLuzerne said. “If people can’t compost and they want to, we need to give them options.”

Sturgeon Bay’s public works department collects vegetative scraps from city residents, and the Village of Egg Harbor picks up fruit and vegetable scraps from local restaurants and allows residents to drop off grass clippings at its recycling site.

And compost drop-off doesn’t need to stop in winter, even if compost piles don’t function properly while frozen. Dan Fatke of Mighty Wind Farms said that during the winter, he makes the rounds to eateries including Roots Inn & Kitchen, Zero Sum, Blue Horse in Fish Creek, Gills Rock Coffee and many more – an effort that gives him a healthy supply of material after the spring thaw. However, he receives much less material during the winter than the summer.

“During peak season, we get about 1,000 pounds of kitchen scraps per week,” Dan said.

The Fatkes’ compost, added to the soil in the gardens, enriches the soil and builds it thicker, which is priceless in parts of the county that have just a thin layer of earth above bedrock. When Mighty Wind started its composting efforts, the virgin soil was light brown and not very rich. Now it’s become darker brown and more productive.

In addition to adding compost, Fatke plants cover crops and leaves plant material in the gardens during the winter, allowing the organic material to loosen the soil and break down like compost.

“The more you learn about it, the more you realize it’s good for the planet and for the soil on your own land,” Char Fatke said.