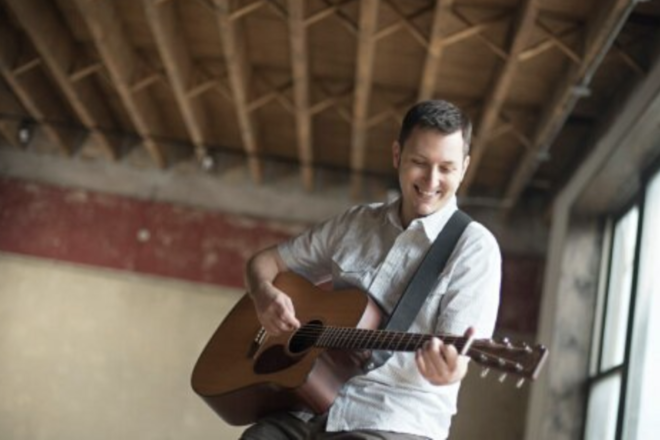 Singer-songwriter Zachary Scot Johnson was about to start his set as part of the Evenings in Ephraim concert series when a loud car filled with rowdy teenagers roared past.

Johnson braced himself for what he was certain would follow.

“Initially, I thought, ‘Oh no,’” Johnson said. “But they must have seen my name on a poster or something because as they went by, they shouted, ‘Go, Zachary Scot Johnson!’ Only in Door County are even the heckles going to be nice.”

The small-town pleasantries – and jeers that really aren’t jeers – are just some of the endearing qualities that have brought Johnson back as a performer in the various community-concert series since his first appearance in 2008 in Fish Creek.

“I love these series, so I’ll drive from quite a ways away to do them,” said Johnson, who hails from Racine, Wisconsin, but currently lives in St. Paul, Minnesota, with his wife and newborn daughter. “It’s a place where you develop relationships with the people who book you, even though you see them one day a year.”

The crowds – though they can be a bit finicky about the weather – are also a major draw.

“One thing I love about Door County audiences is most of the people are tourists,” Johnson said. “So I’ll play a concert in the park, and someone might come up to me and say, ‘I saw you play in Arizona.’ It’s kind of wild.”

And although he may not recognize local audience members by name, he does begin to recognize them by face.

“It’s a really cool thing seeing the same people come out to your show year after year,” Johnson said.

The multi-instrumentalist blends his easy-listening style – influenced by the guitar lines of James Taylor, the lyricism of Joni Mitchell and vocals reminiscent of Elvis Costello – with original work and fresh takes on a diverse range of covers. But which songs you’ll actually hear when you go to see him could change like Door County weather.

“I pretty much never make a set list, ever,” Johnson said. “I just go with whatever is feeling good in the moment.”

The only way he says his set changes noticeably on occasion – particularly from shows he does in other locations and venues – is that he cuts back on the amount of storytelling.

“Sometimes if I feel there’s just a lot of distractions, or like people’s attention isn’t there for it, it becomes a buckle-down-and-play-music-for-two-hours kind of a set, which is not typically how I play,” Johnson said.

That can be a challenge because, he explained, stories play an important role in a set by giving context to songs or creating connections between the audience or locale and the music.

“A lot of times people will ask about updates [on the stories] – how is that going, or how is this going?” Johnson said.
Sometimes, though, those stories take on a life of their own, becoming too large to fit in the show. Such was the case with a song by Scottish folk singer Donovan.

“I never plan a set list,” Johnson said, “but I used to play three songs in a row because they made me feel super comfortable; they grounded me.”

The first one in the trio was Donovan’s “Catch the Wind.”
“And when I started my YouTube project, The Song a Day Project, that was the first day because it was the song I would start with,” Johnson said.

But when Donovan learned about Johnson’s The Song a Day Project – a YouTube channel Johnson established in 2012 where he records a song every day – Donovan invited Johnson to perform with him at a gig in Ireland and, much to Johnson’s surprise, recorded that song.

Do you have a suggestion for a new opening song? Share it with Johnson when he takes the stage back where his Door County community-concert days began – as part of Fish Creek’s free Concerts in the Park series on Tuesday, Aug. 9, 4-6 pm, in downtown Fish Creek’s Noble Square.

The Song a Day Project

When Zachary Scot Johnson hit “Upload” to a video of his performance of a cover of “Catch the Wind” by Donovan, he wasn’t sure where his latest musical project – dubbed The Song a Day Project – would lead.

Johnson had set the goal to perform and record one song, every day, for as long as he could. More than 3,600 uploads later, he continues to perform and record one song every single day for his The Song a Day Project YouTube channel, which now boasts more than 10,000 subscribers. Sometimes Johnson records as a soloist; sometimes one of his favorite musicians (including Donovan, Shawn Colvin, Rosanne Cash, Jeff Daniels and others) joins him; or sometimes his wife – and fellow musician – Megan sings or plays along. Or, more recently, he plays to his newborn daughter, Jett.

What started out as a double-edged goal to both gain exposure as a young touring musician and develop a daily practice quickly became a situation in which Johnson had run through his repertoire of favorite covers. In a matter of weeks, he went from playing a song a day to learning a song a day.

In September, Johnson will celebrate a decade of The Song a Day Project. Listen – or play or sing – along at youtube.com/user/thesongadayproject.