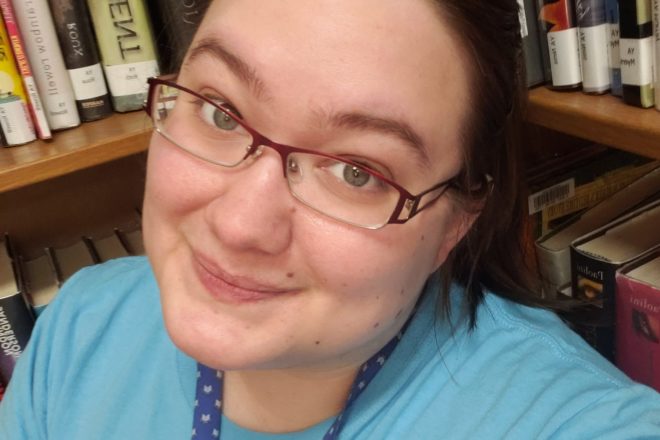 When looking at the events calendar for the Algoma Public Library, among the story hours, coffee-and-conversation offerings and writers’ nights, you might notice a few unconventional items such as TikTok Tuesday and Among Us Night (a very popular mobile and computer game).

However, Braelyn Dempsey, the head of young-adult programming doesn’t see these as out of place at all. When discussing how she comes up with ideas for the program, she said she’s eager to hear from the young adults of the community.

“I want to give them a voice in what their library is offering them,” she said. “The programming isn’t for me – it’s for them.”

After earning her degree in writing and literature, Dempsey moved to Algoma from Upper Michigan and found herself at the library shortly afterward.

She said that the 11- to 18-year-old age group is often overlooked. Very young children are introduced to books, hobbies and interests in high volume in a short amount of time, and adults are generally set in their interests. The young-adult age group, however, is where the molding and cementing of those specific interests takes hold. And the library is the perfect place to foster that.

“Whatever you want to read, and whatever skills you want to cultivate, we have something for that,” Dempsey said.

Though she was speaking of her young-adult program, the sentiment is appropriate for all members of the community. COVID-19 affected libraries just as it did all other organizations, but Dempsey decided she wouldn’t let it hamper her goals – instead, she would use it to inform a new, effective direction.

“There were downsides in the previous programming,” Dempsey said. “We couldn’t reach everyone. If someone’s schedule clashed with an event or activity, they just had to miss it.”

During 2020, library staff members were forced to look at new and innovative ways to offer their programming, such as moving activities online or offering them in a pickup-and-take-home fashion. The escape rooms, for example, which were done physically before, are all done virtually now, with help offered and questions answered online or with a phone call.

Another pleasant surprise was the interest in and success of the library’s take-home kits.

“It’s like a program in a bag that lets patrons have something fun and interactive to do on their own or with their families. It’s made social distancing and quarantine more bearable and even fun,” Dempsey said.

Some of the more skill-based kits such as knitting and macramé help people to learn a new skill, with the library providing help to get past the tricky spots and answering questions through video and livestreams. Its March offerings include the March into Reading kit, which offers an age-appropriate reading recommendation and accompanying craft to help engage with the material. Families with younger children could pick up a Leprechaun Trap Grab & Go kit, which led kids through building their own leprechaun trap in time for St. Patrick’s Day.

Interestingly, TikTok Tuesday – although primarily established for the community’s young adults – has gained attention from TikTokkers all over the country. That led to staff at other libraries finding the Algoma staff, swapping ideas and making connections from far away.

The Algoma Public Library has tried to branch out to offer more of its services digitally. Patrons can check out Wi-Fi hotspots for a week at a time, and with so many people working or attending school from home, these have become very useful to the community.

“When they know they’ll be waiting for something important, they’ll come check a hotspot out as it’s sometimes better internet than their own connection,” Dempsey said.

The library has been providing updates on Facebook and Instagram Live, but knowing that some community members do not have high-quality online access, the staff has been in talks with the local cable channels to offer content there as well.

With all of these efforts to help the community, it’s clear that the Algoma Public Library has found the silver lining in a difficult situation.

“It’s easy to feel like COVID took a lot from us as a community, but it also opened up a lot of opportunities,” Dempsey said. “It’s forced us to learn and grow as a community because it isn’t just happening to some of us – but to all of us.”