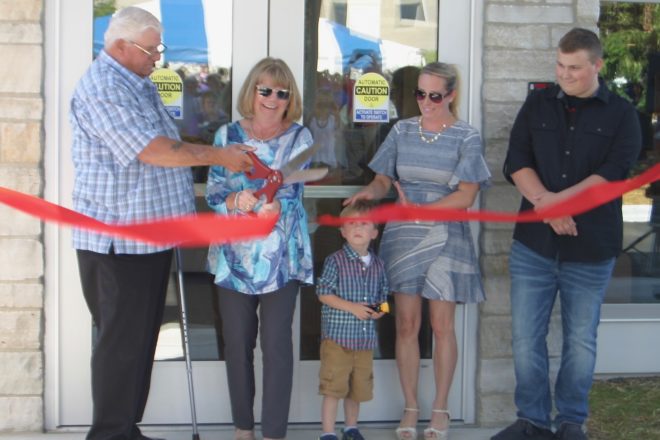 “This is exactly what we wanted,” Jelaine Horton said after the Aug. 1 dedication of the new skilled nursing and hospice center named for her and her husband, Pete. “We live in the best community.”

The idea for a new facility came from the Hortons, along with $2 million to kick-start the campaign. The inspiration came from the Horton family’s experience in 2005 when Pete’s 93-year-old mother, Ethel, was nearing the end of her life in a facility that was named for her and her late husband, Arthur, because they were the biggest donors.

“It was more like home than an institution,” Pete told the Peninsula Pulse at the 2018 groundbreaking for the center on the Door County Medical Center (DCMC) campus.

Jelaine said everything they imagined for the Door County facility was realized.

“It all came to life. It’s beautiful,” she said.

Located in a green space on the corner of South 16th Place and Rhode Island Street, the 25,000-square-foot facility has 32 rooms that have been divided into two “neighborhoods” of 15 private, skilled nursing resident rooms, and one room in each neighborhood reserved for end-of-life hospice care.

DCMC President and CEO Brian Stephens started the ceremony by apologizing if his list of thank-yous felt like an Academy Awards ceremony.

First he thanked the entire community. “We would not have been able to do this without community support,” Stephens said. “The Door County community helped us raise more than $5 million for this project. We’re so blessed to live in a place where neighbors care about neighbors, and folks have resources to share.”

Next were the hospital employees, who donated more than $80,000 to the project; and the hospital’s board of directors, whose members threw their full support behind the project, even when the original cost estimate of $9.5 million ballooned to more than $10 million due to the tariffs imposed during President Trump’s trade war.

Of course, the Hortons were on Stephens’ list, along with all the people and businesses that brought the facility to fruition.

He also thanked the residential neighbors of the center. “It was really important to us that it felt more residential, less institutional. In doing so, we wanted it to be part of the neighborhood. … We couldn’t ask for a better group of neighbors.”

Former DCMC CEO Jerry Worrick, who retired at the end of last year after 31 years with the hospital, said, “This is a dream come true and a lot of planning over the years.”

Although he credited the Hortons with making it happen, he told of his own personal experience with the former skilled nursing facility on the third floor of the hospital when his mother-in-law was there in 2011.

“That, then, forced me to focus on what’s going on on that floor,” Worrick said. “She was with us about six, seven months. It was a real eye-opening thing.”

Although he was impressed with the staff and the level of service they provided, the facility was housed in an institutional setting.

“Let’s get them off the third floor,” he said.

Building a new facility might not make sense financially because, as Worrick said, “Nursing homes are not the glamorous part of health care,” but this was about “doing the right thing,” he said.

Worrick said the project became part of his retirement plan.

“I would retire when this project was safely on the ground and on its way to completion,” he said. “I am really proud. I got a preview. Wait until you see the place.”

Mike Herlache, executive director of the DCMC Foundation, said that with more than 1,000 donations given for this project, it was the biggest campaign during his 22 years on the job.

“The community really outdid itself,” he said. “And donations are still coming in.”

Herlache echoed Worrick’s comment about this being an example of doing the right thing, saying that the facility is mission-driven rather than profit-driven, which means Herlache and his team will be in constant fundraising mode for the Pete and Jelaine Horton Center.