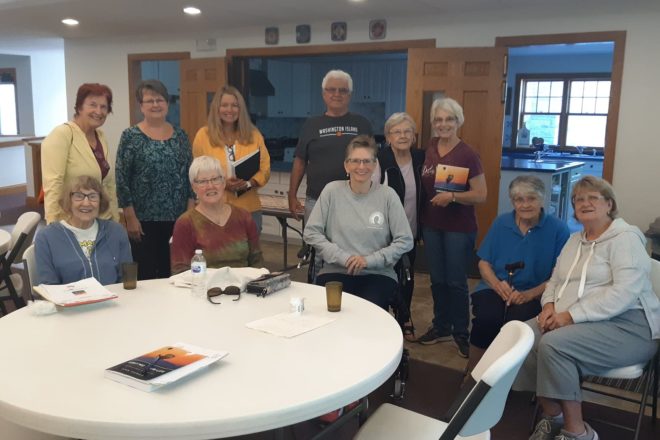 Earlier this fall, Write On, Door County sponsored the Writing Your Memories program for senior citizens at the Washington Island Community Health Program. Ann Martin-Fornaciari led the program on Wednesday afternoons at Trinity Lutheran Church, where 25 people gathered to share memories of the people and places that had been important to them so far in their lives.

We’re happy to share Pam Goodlet’s memories of her childhood on Washington Island. This holiday season, consider writing down your memories of childhood or another important era of your life as a gift for family members and friends.

I remember trying to stay awake for movies at Nelsen’s Hall. Mama picked out Ma and Pa Kettle movies at the start of the summer to take my sister and me along with her to see. After the movie was over, we crossed the street for a special treat at Lindsay’s. It was a cherry float. I remember them as being two feet in big, silver containers and tasting so good.

I remember Mama visiting her friends with me. I was five years old, and we went to Gladys Jepson’s farmhouse. She was a lovely person, and she gave me a stuffed animal (a pink kitty cat) to play with. I soon fell asleep. I also went with Mama to visit Ruby Farmer. She had a tiny kitchen behind the doctor’s office. On the little television set, a black-and-white, we watched an episode of “I Love Lucy.” I also went with Mama to a party for a group of ladies at Sylvia Zoellneers’ house (where Larry and Jeannie Young live today). Mama took me with her to the restroom, and she told me to sing so they wouldn’t hear her tinkle. I didn’t sing and was OK with that.

I do remember coming home with Daddy after my sister and I had spent the day with him out at the Jackson Harbor dock. Daddy packed fish boxes with ice. The fish company had colorful calendars with pictures of big fish on the walls. I was so cold, and Mama had homemade pea soup in a big kettle waiting for us on her white enamel cook stove for when we got home that night. It was so good.

I remember Mama working long and hard days on the potato harvester at the potato farm. When she came home, she had huge bruises on her legs and arms.

I remember my mama, sister and me going to the beach (The Ridges now) to swim. Mama had a bright-red bathing suit, and my sister and I always wore bathing caps. The water and sand smelled so good!

I had been given a pure-white kitten from Netta Cornell (now Hanlin), and a cow laid on it out in the barn and it died. My mama had already left for Karly’s to bowl in the women’s league. My daddy called her, and she came home to comfort me, as only a mama could.

On the Fourth of July, my mama, sister and I had red, white and blue matching dresses. We went to see the fireworks at the ballpark. I didn’t like all the noise.

Mama and Marcella Hagen were custodians for the grade school. Mama took me there before my first day of school to show me how it looked. It was very clean and smelled of fresh paint. Mama kept our own house spotless, and she painted almost all of the interior walls herself. We had a Valentine’s Day party at school, and the mothers had made treats. I so wanted one of Mama’s cupcakes with seven-minute frosting. They were the first to go, and I didn’t get one.

Mama, Grandpa, Grandma, my sister and I went to visit my mama’s two brothers and their families in Algoma. On the way back home, the ferry boat wasn’t running, so we drove back to Sister Bay and stayed at Husby’s for the night. My sister and I had so much fun jumping on the bed. Mama said we had to stop or the hotel people would throw us all out.

Mama went to see Dr. Farmer because she thought something was wrong. He told her she was fine. When her symptoms continued and she went back to him, he told her it was just the change of life (she was only 39). Daddy said enough of Dr. Farmer and took her to see a doctor in Green Bay. There she was sold she had stage-four cervical cancer. She was sent to Madison for treatments.

I remember the presents Mama brought back from her trips to the hospital for my sister and me. One was an enamel Easter egg by Mattel that played music. I still have it!

Mama and Daddy were gone for long periods of time to the hospital for treatments for Mama, so time for my sister and me with Mama became very precious.

I have a scrapbook of letters that Mama and even Daddy wrote to my sister and me while they were stuck at the hospital. Also, I have letters we wrote back to them.

When Mama didn’t get better, Daddy flew with her to Texas for what was supposed to be a cure for cancer. It was all a hoax and a dirty place. When they returned, Mama died a few days later at Grandpa and Grandma’s house. Grandma and Daddy had been her caregivers. She was 41 years old.

I went to the funeral, and Mama looked beautiful in her coffin. I was only seven years old.

The lives of my grandmother, father, sister, brother and me would never be the same; we became very close and protective of each other. It was a devastating loss that we would never be able to completely recover from.