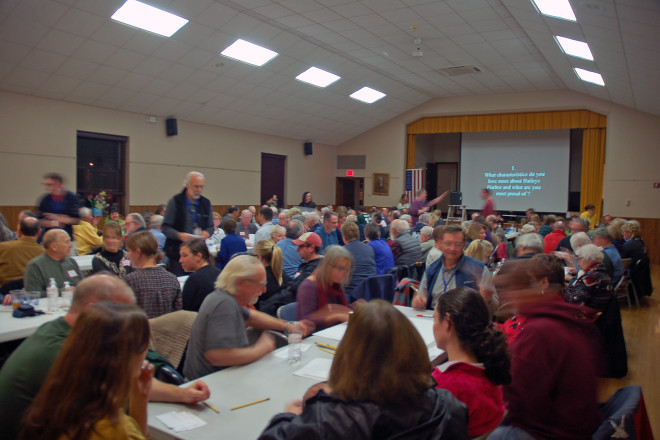 They came. They saw. They envisioned.

“It’s been a very stimulating experience,” said Gordon Rowley, head of the Baileys Harbor Plan Commission and a member of the coordinating committee that put together a weekend planning session between the community and a group of volunteer experts in a variety of fields to help focus on what can be done for the future of Baileys Harbor.

Rowley said he was impressed with the turnout of 170 or so people for the Friday night potluck and community visioning session. He was also part of the group earlier on Friday that took a two-hour bus ride to some of the highlights of the town, including Björklunden, The Ridges, Cana Island and beautiful downtown Baileys Harbor itself. 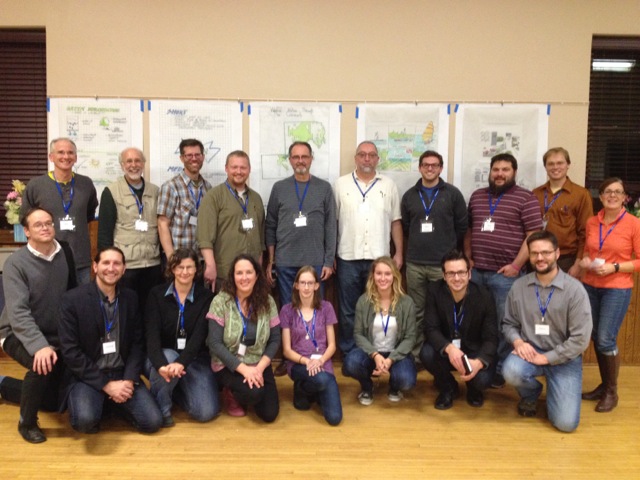 Members of the design team. Photo by Mariah Goode.

The concept is from Minnesota, where it is known as the Minnesota Design Team. A group of volunteers descend on a community for three days, staying with host families and immersing themselves in the culture and values of the community, through observation and dialogue with as large a demographic of that particular community as possible. After a community meeting where residents provide their visions of the future, the volunteer team is charged with prioritizing and coming up with a potential plan of action for the community, and then it’s up to the community to implement.

“Baileys Harbor we learned in one sense is a guinea pig for this process. The University of Wisconsin-Extension is very interested in bringing this into the state,” Rowley said. He also told the story of when Todd Johnson with UW-Extension at UW-River Falls, a man who had 18 years of experience with the Minnesota Design Team, contacted Rob Burke, his UW-Ex counterpart in Door County, about putting together a team to visit a Door County community, Burke did not hesitate in mentioning Baileys Harbor.

The team of architects, planners, landscape specialists, an economist, various UW-Ex experts and one high school student showed up on Nov. 4 to meet their host families; the game was on.

The only person in the 20-member design team who did not stay with a host family in Baileys Harbor was University of Minnesota graduate student Max Dickson, son of Village of Egg Harbor Trustee Bob Dickson.

“I’m majoring in landscape architecture and urban regional planning, so this is a great experience and a great opportunity to come back to Door County and have an influence on how Door County grows and evolves and what the future looks like,” he said. “This is my first experience with a design team. I’m looking forward to participating in many more design team visits. It was a really great process. I was really surprised with the turnout and the diversity of people who came. From such a small town, you wouldn’t expect so many people to get involved. It shows how much the community values the town and how they really care about how it grows and changes.”

“It’s been a dream to work here. Perfect,” Todd Johnson said. “It’s a great opportunity to have somebody like Rob Burke working with the locals to get them ready ahead of time. Everything was set up for us. A turn-key operation.”

Everyone involved was pleasantly surprised at the number and variety of people who showed up for the community potluck dinner and visioning session at the town hall on Friday.

“Some people have been grumbling that there weren’t enough young people there. I had the opposite reaction,” said Mariah Goode, a Baileys Harbor resident who leads the Door County Planning and Zoning Dept. and who also served on the coordinating committee for the design team experience. “I’ve never seen that diverse of a crowd at any meeting I’ve ever been to in Door County as far as families and kids. There were more people in the room over 50 than young people, but the themes were very supportive of families and jobs and affordable housing, so I think people, even if they’re older, are very cognizant of the demographic skew that’s happening in the town.” 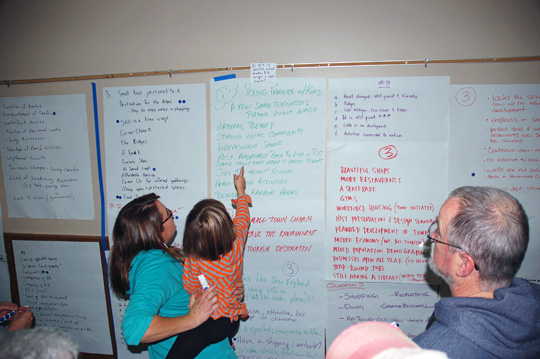 At the Friday night session, the crowd was asked to sit at tables that could accommodate up to 10 people, with a design team member at each table. They were then asked to write down answers to questions such as “What characteristics do you love about Baileys Harbor and what are you most proud of?” and “It’s 2030, what makes Baileys Harbor unique in Door County?”

After all the answers were in, the team member at each table was responsible for working with the group at the table to distill the ideas from each question into one sheet of responses. Those sheets were then posted around the room and colored stickers were handed out to the audience, who were then asked to place a sticker by the answer under each of the six categories that was most important to them.

Some of the most popular answers included:

Gordon Rowley said he was not surprised by the themes that emerged. “There are some things that are evergreen themes,” he said.

The Ridges Sanctuary was certainly embraced as a major asset to the community, which put a smile on the face of Steve Leonard, executive director of the Ridges and also a member of the coordinating committee that brought the team in.

Leonard, too, said he wasn’t really surprised by anything he heard.

“A lot of the comments we’ve heard over the years. What’s been great, everybody’s been here to talk about it together compared to individually or in small groups. This was a fantastic process. It really pulled the community together, all those different audiences together.”

On Saturday, the design team huddled with all the data they had collected from residents the night before and distilled things down again into easy, doable action items and more long-term projects.

“I’ve been a planner for 20 years, and that’s the first time I’ve ever seen anything like that,” Goode said of the work the team did on Saturday. She was at the town hall all day Saturday with the team, serving as gofer for whatever they needed.

“It was pretty incredible,” she said. “Anybody who doubts that they didn’t put an incredible amount of time and thought and care into really listening to the community and coming up with ideas that day, I really would like to squelch that idea out there because it is just not true.”

So, the visioning is done. The ideas are on paper. What’s next?

“There will be follow-ups with members of the design team,” Rowley said. “They don’t go away and forget about us. They will keep tabs on what we are doing.”

The coordinating committee – Rowley, Goode, Leonard, Baileys Harbor Community Association Event and Marketing Coordinator Brynn Swanson, Baileys Harbor Clerk/Administrator Doug Smith and new member Peter Jacobs, who serves on the Baileys Harbor Town Board – are expected to meet next week to plan for the next steps.

“We will be looking at the various ideas closely,” Rowley said, “and we will work to get the community to continue working with us. The participation of people is so important. The whole thrust of this is to allow a community to come to some visions for itself. Not the town or Plan Commission. It has to come from the community.”