Door County Trolley’s Eric III trolley made for an unorthodox setting for an earnest discussion about the struggles of a young democracy, but that’s all we had.

I had hopped aboard the trolley as it entered Peninsula State Park carrying a delegation of six men from the Eurasion nation of Azerbaijan on a tour of the park. The men were in Door County for a week as guests of the League of Women Voters participating in the Open World program, in which they are hoping to learn about local governance, education, citizen participation, and the role of media in American democracy. 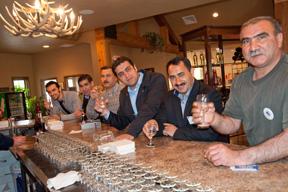 This is how I found myself talking about local government and education with 25-year-old Aydin Namig Mammadov amid the clatter of the trolley, the use of which had been donated for the occasion. Mammadov, a media officer with Oxfam Great Britain in Azerbaijan, and his fellow delegates had visited Sturgeon Bay schools earlier in the day, and it was clear that the importance of education in American society had struck them.

“There was a general feeling that the schools are so well equipped,” Mammadov said. “The children here are really lucky that the community puts so much emphasis on education. It creates a very big opportunity for children to go in a lot of different directions – music, art, science, and sports. Even in the music program, the quality of the instruments is probably better than our national symphony.”

“There’s a sense that there’s a lot of independence in the school,” said Jeyhun Jamal Karamov, a member of the delegation who attended high school and college in the United States and acts as the translator for the group. “Even in how students interact with their teachers, they’re independent and free to express opinions, but they’re still listening.”

But it wasn’t just materials and tangible items that stuck out to members of the delegation. Hikmat Humbat Aliyev is the Deputy Chairman of Zabrat municipality, an elected position. He sat at the front of the trolley soaking in the day’s events. He’s old enough to have grown into a young adult under Soviet rule, and now he’s a member of a government still trying to figure out democracy 20 years after it gained independence from the Soviet Union in 1991.

His thoughts immediately went to the most mundane of administrative tasks.

“We appreciate the administration of the school and how they make decisions,” he said through Karamov. “So many of our problems are caused from poor administration.”

Azerbaijan and the United States might each be loosely labeled as democracies, but it’s clear as one listens to Aliyev that the interpretations of what that label means are miles apart.

“Here, you seem to have a single local government system that works,” he says. It seems like a strange observation until he explains further. “In Azerbaijan, there’s a form of dual local government that doesn’t work as well. Here it seems very important that things are done on time. Tax bills go out and are collected. And it’s transparent. You get a bill that tells you where the tax dollars will go when you pay. It’s very important that meetings are publicized and available to the public. There’s a lot more accountability.”

As I gather bits and pieces of perspective from the delegation throughout the evening, a picture emerges of a scattered, insecure government with redundant and ineffective layers of bureaucracy. Power, it seems, funnels distinctly to the top. Elected officials, Mammadov tells me, have little real say because most of the power to make decisions is held in positions appointed by the president, a man elected with 85 percent of the vote in an election that didn’t pass international standards.

Mammadov is working to create more transparency by the government and more cooperation between media and government.

“We want to educate people and the government about the problems of local government,” he said. “We want to show them what people are struggling with in rural areas.”

He leans forward from his trolley bench and tells the story of the first time he ventured out of the capital city of Baku and into the poor, rural areas of Azerbaijan when he was 19. He’s earnest, passionate about the challenges of his country’s poor, and extremely skeptical of his own government’s commitment to help them.

His team created a video about the desperate need for basic necessities and economic development in such areas, but the government won’t allow the video to be shown on television.

Mammadov is clearly passionate about the issue, and clearly impatient with the pace of change. He says he had no idea there were places in his own country struggling so badly until he visited them. The government doesn’t allow those stories to be told to those in more developed regions, a censorship that remains embedded in the government’s paranoia from the Soviet era.

The economy and education system, he says, are slowly getting better. Other, older members of the delegation like Aliyev and Ilham Gulaga Abushov, a Municipal Council Member, seem to put more weight in the cultural challenges they are up against, and they repeatedly point to the pace of change in the United States as an example.

But the government of Azerbaijan is extremely corrupt, according to both Mammadov and international media outlets. That corruption dampens aspirations. The economy has picked up in recent years because the nation is oil-rich, but the benefits are flowing to the top and pinning the nation in the middle of international energy squabbles.

“There is a growing sentiment that oil is not our blessing,” Mammadov said, “but our curse.”

In Azerbaijan the United States was looked at as a savior in the mid-1990s, but today the impression has changed.

“Now not so much,” Mammadov said. “People don’t believe the U.S. is genuinely interested in helping people anymore.”

“This is a way of [using] U.S. money to promote peaceful ways of solving international conflicts,” Senarighi said.

The Azerbaijan delegation spent May 6 – 14 in Door County. The stay included visits with town, village, county and school officials, as well as a forum on the role of media in democracy with Peninsula Pulse reporter Myles Dannhausen Jr. and Roger Utnehmer, owner of the radio stations of Door County Daily News.

For more on the delegation’s visit to Door County, visit http://www.ppulse.com.