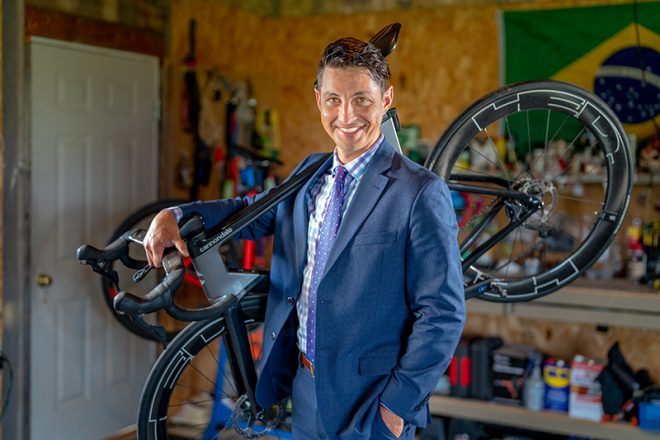 There are early experiences we have that, in the moment, appear to be isolated incidents or even nothing more than a meaningless part of the everyday minutiae. Unbeknownst to us, however, these tiny blips on the timeline can actually become cornerstones for some other aspect of our life down the road.

“The plan, I was told, was to complete their residencies, and then go back to Brazil, where my dad was going to take over his father’s cancer-treatment center,” Fagundes said.

“That was an experience I went through, but I didn’t ever think because of it, I wanted to be a lawyer, let alone become an immigration attorney,” he said.

But that’s exactly where life led Fagundes, who, now in his 10th year of practicing immigration law, is able to look back and connect the dots that helped to shape his career.

Immigration law is perhaps one of the most complicated areas of law – and at times very controversial. In 2017, for example, former Attorney General Jeff Sessions dubbed those in the profession “dirty immigration lawyers.” This legal specialty requires attorneys to have an understanding of the key issues involved, the role the federal government plays in immigration law and policies, and the wide range of situations that fall under the scope of immigration law, from obtaining a green card to deportation.

So when a former co-worker approached Fagundes with an immigration-law question during his first year as a general-practice attorney in Sturgeon Bay, he quickly realized he knew nothing about the field.

However, that naïveté may be what launched his career. What Fagundes lacked in knowledge and experience, he had in time as he was beginning his practice. He reached out to a law school colleague who was practicing immigration law in Chicago. That colleague gave Fagundes a list of resources and told him to “look into it.”

And he did. Not only did Fagundes see a need for immigration attorneys in Door County and the surrounding area, but he discovered that he had a toolbox of skills and experiences that appeared tailored to this career path. One childhood moment in particular stood out to him.

“When I came to the U.S., my mother, who taught English in Brazil, immediately put my younger sister and me in summer school,” Fagundes said.

He shook his head at the memory and called his mom’s DIY language-immersion plan for his nine-year-old self and his younger sister “traumatizing.” At the time, Fagundes knew 10 words in English, including “chocolate milk.”

“Because, my mom told us, ‘When you get to lunch, they are going to ask you if you want regular milk or chocolate milk,’” he said. “So I had memorized ‘chocolate milk.’ But other than that, I knew nothing.”

The memory of the anxiety and fear he felt from being in a classroom with 30 English-speaking peers, unable to understand anything that was going on or being said, still generates a visceral reaction 30-plus years later.

“I can still picture it,” Fagundes said. “I can’t understand anything. Kids are laughing at me. And although it’s not something that applies to all my clients, I can get a bit nasty about it when someone is upset that my client doesn’t speak English because being in those shoes is not a fun place to be.”

Sometimes Fagundes meets a client who is facing both criminal and deportation issues simultaneously. That was the case with Patricia and Luis Perez. They engaged Fagundes for what felt like a “Hail Mary” effort, Patricia Perez said.

“We had gone to five lawyers before him, trying to share our story, and everyone told us either not to try or that it wasn’t worth trying,” she said. “Except for Luca.”

Their dire predicament began as a small paperwork issue, but it grew and resulted in years of fear, stress and challenges.

Luis Perez first came to the United States from Honduras when he was 16. He crossed the border without the proper documentation and was apprehended at the point of entry. He was held in a jail cell for a few weeks before being released under the condition that he would appear for his court date, which was to be scheduled in the future. Perez moved in the meantime, however, and the notice of his court date never arrived at his new address.

Soon after the couple was married, they began checking with lawyers to resolve the issue and get Luis his green card. But there were two problems. The first was the fact that, when Perez did not appear for the court date, the court made the decision in his absence that if he was ever found, he could be deported on the spot without a court date. That was the deportation part of the case.

“Every time he left the door, you didn’t know if he was coming back or what that next phone call would bring,” Patricia said, recalling the fear her family experienced knowing that her husband, and the father of her two children, could be removed from the country at any moment.

The criminal side of the case involved an incident when Luis was still a minor.

“He entered a high school with a friend and was picked up for not being a registered student,” Patricia said, and it went on his record as a criminal offense.

Before Luis could address the deportation issue, that criminal part of the case had to be reopened and resolved. It would involve a delicate dance of timelines, an enormous amount of strategic planning and, most of all, persistence.

“The entire process requires a lot of financial and even medical records,” Patricia said. “And you have to be willing to be interviewed about it. It makes you feel exposed to the world.”

Becoming your own advocate – and finding others to advocate for you – are also key.

“Luca was definitely one of those people for our journey,” she said.

Perez ultimately applied for and received his green card and is working toward full citizenship. The Perez family’s situation illustrates the immediate, urgent needs that Fagundes sees with most of his clients.

“They come to me when they’re about to be deported or because they finally have the courage – and the savings – to go through the legal process to obtain lawful status, which is very expensive. It can be thousands upon thousands of dollars just to complete the green-card application process.”

In both areas of his practice, Fagundes finds that empathy and trust – fostered by and filtered through his own life experiences – are his most-used and most valuable tools when working with clients.

“Beyond being able to speak their language, beyond sharing the experience of coming from a different country, remembering the friction of being a kid raised in the United States by parents who aren’t from the United States has probably had a greater value for me when it comes to understanding my clients and their situations,” he said. “When you aren’t from here, or you are raised by parents who aren’t from here, every single difference is highlighted.”

Fagundes said that remembering those experiences and the feelings they stirred has helped him to tune in to his clients’ fears, anxieties and questions when they go to see him.

After a decade of working with families facing immigration issues, one of his biggest pet peeves is when he hears or reads comments that people like his clients should “get in line.”

“The idea that people who are here without status need to go back and get in this imaginary line where you sign up, and within six months, you’re in the United States – that’s just not the case,” Fagundes said. “It’s not a thing, and it doesn’t exist.”

He explained that those who do enter the country with the necessary documents and status as his parents did, already have some sort of financial means to do so.

“To compare a person like that to somebody who has a sixth-grade education from rural Mexico and who may or may not be able to read and write in their own language, it’s just a really hurtful, insensitive and uninformed comment to make.”

For all these reasons, the work can feel like a never-ending battle, but it also offers deep rewards.

“The lows are lows, but the highs are highs,” Fagundes said. “When you’re an attorney, everything is adversarial. I tell my wife, ‘I get paid to fight.’ But when your client does get that green card, or the judge decides that your client – who has been in this country for 20 years and has raised five children here – is going to be able to stay with their family, that’s very rewarding.”

On the Road with a Lens

There seems to be a pattern in Luca Fagundes’ life in which his childhood experiences directly influence his interests and direction as an adult, from his career to his hobbies, cycling included.

“When I was very young, I was a gymnast,” Fagundes said, but a torn meniscus in his left knee put an early end to any gymnastic aspirations. With limitations placed on which sports he could participate in, he picked up cycling.

“I started road biking, eventually doing some racing,” he said.

But behind the no-big-deal tone of this statement is an impressive list of racing accomplishments, both in and outside the United States, as well as a few pro races.

Fagundes took a break from professional racing when he entered law school, but he decided to jump back in this past June, competing in the Tour of America’s Dairyland race in Manitowoc.

He recounted his return to racing on his Facebook page.

“2006 was my last year racing,” he wrote. “Fifteen years later, I decided that I wanted to give my kids a glimpse of my past life.”

He described the experience as a “sufferfest” but took pride in the fact that he was in the lead group for 42 of the 50 laps.

“My kids watched me suffer like a dog,” he said, “but they were my most important spectators. It was a good time.”

Aside from being a stress reliever, cycling has opened doors to new interests and creative outlets for Fagundes – specifically in photography. He shares his love of Door County through photographs, mostly taken on his bike rides, which he then posts on Instagram under the handle @doorcountyshots.

“The photography thing is funny because it came about from me just taking pictures of stuff I would see while I was out riding,” Fagundes said.

A cloud-covered sky, a meadow at sunset, an abandoned farmhouse: These are just a sampling of the sights he captures from behind the lens while cycling the county’s back roads. In addition to being a creative outlet, photography provides Fagundes with a sense of completion that he doesn’t always get from practicing law.

“Sometimes, even when you close a case, it doesn’t feel finished,” he said. “There are times I can’t put a bow on it and say, ‘I’m done.’”

Photography, he said, is different.

“If I capture a nice photograph of something, and I do a little tweaking and editing on it, I can put it out there as a form of art for people to enjoy. That is a really rewarding feeling,” he said. “It’s like saying, ‘Here, I did this. This is something I was able to put out there completely finished.’”