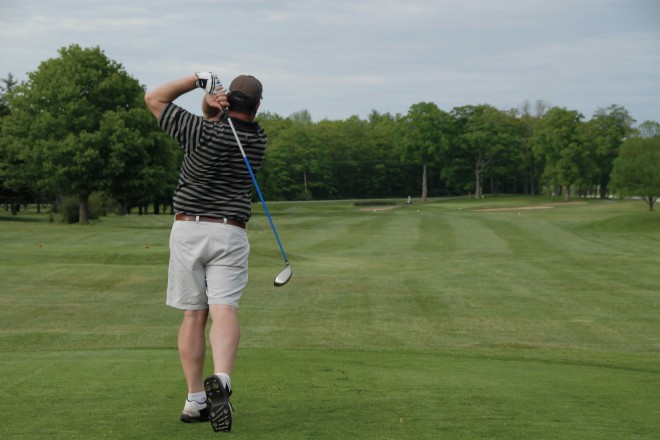 One of Door County’s finest attributes is its array of scenic golf courses. During our limited season you can find hundreds of people taking advantage of the miles and miles of beautifully-manicured fairways. What you may not be aware of is the competition between some of the players on those courses. Many of our area golf courses offer local or summer residents a chance to join a weekly league. One such league takes place every Monday night at Maxwelton Braes in Baileys Harbor.

The “Monday Night League” began 10-plus years ago at Bay Ridge Golf Course in Sister Bay. Since Bay Ridge is a nine-hole course the league started, and has remained at, nine-hole rounds. At its beginnings there were a handful of local men who would meet after work and play at their own pace. After the round, players would hang around the small clubhouse, have a beer, wait to compare scores and hand out “skins” money.

After several years, the league numbers were growing, including a good number of female players, so the decision was made to move to a larger course. Jason Daubner, a local favorite son, had serendipitously also just made a move:  to that of head professional at Maxwelton Braes in Baileys Harbor. The league members were excited to connect with Jason and happily made the move to the “quiet side” of the county.

After the relocation to Maxwelton, Jason took the reins to accommodate the golfers. The structure of the league became more, well…structured. There is now a point system for low net and low gross scores that accumulates over the season, money is paid out on a weekly basis from skins, and there is a substantial payout for the top eight players with the most points at the end of the season. The season begins in mid-May and continues through Labor Day; it then caps off with a mixed scramble for men and women. A banquet with awards and prizes follows the scramble.

Each Monday, there is a shotgun start promptly at 4:30 and although the league welcomes both men and women golfers, the genders play separately. As players arrive they are given a hole assignment, which entails the highly-scientific practice of picking a card with a number one through nine. The random selection ensures that your foursome changes from week to week. Most of the group is comfortable with each other – local friends that enjoy a rare chance to take advantage of our fair county’s fairways. This gives everyone a chance to catch up with friends and acquaintances in a low-key, fun environment. Occasionally, an unfamiliar face shows up which is a great chance to get to know someone new to the county and expand the league and your own social circle.

With that being said, make no mistake:  this is a competitive league with many better-than-average golfers. The money is serious and so are the players…fierce, but friendly. Jason Daubner is always happy to bring another golfer to the league but is quick to point out that you should know a divot from a dogleg before you sign up.

The camaraderie in this league is as deep as the competition. After every round, almost all the golfers gather in the bar for an hour of food and drinks and a lot of friendly ribbing and joking. Many anxious eyes await Jason’s arrival with the tally sheet and people make no bones about checking out their competitors’ scores, but they are also genuinely supportive and applaud a friend’s great round. Maxwelton has dinner specials and lots of cold drinks for players after golf. Many Monday nights can find a group having burgers and reliving stroke by stroke the evening’s round.

Some of the original members of the league are still “in play” today. Local restaurant owner James “J.J.” Johnson and seasonal resident Bill Calkins still make the Monday night trek to get in their nine holes. Several other players have been around for many years. Tony Gonzales, for example, has been playing for longer than he likes to remember and is the volunteer coordinator for the men’s half of the league. Tony sends out letters to members and fields any questions before the season. Tony’s brother John Gonzales, from all accounts, was also one of the original members of the league. John was an avid golfer who unfortunately passed away seven years ago. The Johnny G Memorial Golf Outing, also held at Maxwelton Braes, was started in his honor. It takes place every fall and awards scholarship monies to local students.

Summers in Door County seem to go by in the blink of an eye. The Monday Night Golf League gives everyone a chance to slow down, enjoy a round of golf and a cold drink with friends that we may not get too much of a chance to see during our busy season. Walking nine holes lends itself to conversation and when the winds of Lake Michigan lie down for a while, the course is as pretty as any. If you are a fun-loving but avid (handicapped) golfer and you stick around for the summer months, consider this the league for you.

Jason Daubner welcomes questions about this or any of Maxwelton Braes’ summer leagues. Call the pro-shop during business hours at (920) 839-2321.

For as long as there has been a Monday night golf league, there has been another golf tradition – an evening round at the Red Putter. After nine holes at Maxwelton, some dinner, and a peek at who won the points, several guys from the league head to the mini golf course for another chance at the bragging rights of the day.

League member Brian Larson remembers what was called, at one time, “The Masters.” The Masters was considered the trifecta of mini golf; it consisted of a round at Johnson’s Park, a round at Thumb Fun (which no longer exists) and ended with two rounds at the Red Putter, located in Ephraim. The local Sister Bay baseball team, aptly named the Bays, started this ritual many years ago. Members of the Bays would head out after their team practice on Saturdays to partake in “The Masters” and Larson claims this was the precursor for the Monday night escapades. From the very beginnings of the golf league, the guys felt a sort of natural progression from one course to the next. “We just sort of finished golfing and went up the hill,” says Larson.

Players are as familiar with the intricacies of the Red Putter course as they are with any “big boy” golf course in the county. Every curve in the concrete or ripple in the AstroTurf is duly noted and incorporated into strategy. I have played many times with my family at this course (although as a female member of the Monday night league, I have never been invited to play with the guys at the Red Putter) and I can see the change come over my husband as we pull into the Putter’s small parking lot. He immediately goes into competition mode. This is serious business; putt-putt golf at the Putter is not to be taken lightly. This is a practice round for him to improve and gain an advantage for the next Monday night.

Tradition runs deep in this side league and certain rules must be followed. At hole number two, “the log hole,” there is a large log suspended over the hole that someone must manually start swinging. The player must say “Start the log a-swingin’” before play can proceed; no one will swing the log until they hear that line. Long-time league player and Red Putter expert Kenan Bunda recites aloud the instructional poems posted at the beginning of each hole. At “the turn” (the ninth hole, ending the front nine and beginning the back nine), all players’ scores must be shouted loud enough for all other players to hear. There are many other superstitions and idiosyncrasies that have developed over the past decade and I wouldn’t want to be the guy that forgets one. Putter owner Bob Yttri puts out a spread of snacks for the boys as an after party and also provides a small prize for the lowest round. The booby prize for the evening’s high score consists of a can of something most foul — sauerkraut juice (yes, it exists) or something equally distasteful.

If there is a tie, for either first or last place, a playoff is held on “The Bear.” Widely considered the toughest hole on the course, the bear is played over and over until a winner or loser is determined. Any score lower than 40 gets you on the leader board which is displayed all season.

The Red Putter is a Door County institution — this is as Door County as fish boils and cherry pie. The boys love it, play it constantly and have nothing but respect for the course and its owner. As a wife of a long-time player I know that not much comes between a Door County man and the Putter. Certain things are sacred after all.