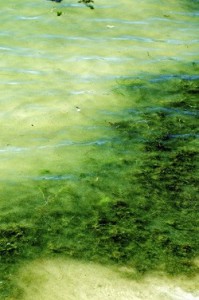 The algae that washed up on the shore of Baileys Harbor this summer wasn’t all tossed in a dumpster or left on the beach. Some of it was taken to Ephraim’s Wastewater Treatment Plant as part of a study to see how useful algae might be in the garden.

“My idea was if we could use [cladophora algae] for compost then we’d divert a lot of this from landfills and save the communities some money,” said Mary Seaman, a University of Wisconsin – Oshkosh biology lecturer who led the research.

Cladophora is green algae that often washes up on Great Lakes shores after it breaks off of nearby hard surfaces. It grows faster when zebra mussels are present, in warm water, in shallow water and when more nutrients run into the lake.

It also smells like sewage when it decays, so many coastal municipalities scoop it off the beaches and take it to landfills.

That’s what Seaman wanted to fix. Landfill space is tight and expensive, and she wanted to find ways to use cladophora instead of trash it.

Seaman and UW – Oshkosh students tested using cladophora as compost, a heat source and an energy source. They took the algae to Ephraim and set up some experiments to see how useful composted cladophora is when mixed with different amounts of woodchips.

Seaman found the pile of just cladophora decomposed the most, but the mixture of 75 percent cladophora and 25 percent woodchips was most useful. She said composted cladophora is a good source of nitrogen, and could act as a good addition to fertilizers that have other nutrients such as phosphorus and potassium.

“The whole idea was that possibly people could either start their own for home use, or there could be a site somewhere – say the wastewater treatment plant – where people could pick up composted cladophora and take it back to their homes,” Seaman said.

Seaman also found that cladophora could be useful as an additive to another heat source such as logs or pellets, and may be a source of methane. She plans to study the algae as a methane source on a larger experiment.

University of Wisconsin – Oshkosh biology lecturer Mary Seaman wrote the Peninsula Pulse a guide to composting cladophora, in case you want to try your hand at finding a way to use the algae.

“It was surprising that it could be done, that you could actually compost it,” Seaman said. “You can use other materials that haven’t been studied – I used woodchips because that was convenient – but you could use other things, [such as] leaves for example.”

• Commercial composting bin, or make your own

• Fresh cladophora (nothing that is decomposing, brown or black)

• Mix together a ratio of ¾ cladophora and ¼ other material

• After the pile decomposes and decreases in volume, add to flower beds