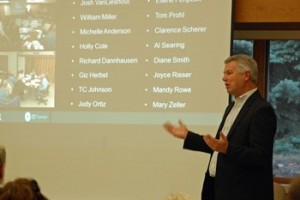 James Vander Heiden of the Milwaukee architectural firm Hammel, Green, & Abrahamsen presented information on the concept and design of the Cowles Community Center.

A bigger, easily accessed library and more public restrooms should be at the heart of the plan for a new multi-use, state-of-the-art public building in downtown Egg Harbor, or at least that was the consensus of those in attendance for the Sept. 23 meeting of the Cowles Community Center Ad Hoc Committee.

And while it should be a green building, it should also look just like the rest of the charming, quaint village. Nothing too contemporary.

The meeting was held in the bare bones 1,400-square-foot cement block meeting room in the Paul J. Bertschinger Community Center, which is also home to the village administrative offices, the U.S. Postal Service branch office which has a lease in the place through 2019, and the high-traffic, high-use, horribly cramped 800-square-foot library.

The meeting was an opportunity for the architects – the Milwaukee-based firm Hammel, Green & Abrahamsen was hired by the village at a July 18 meeting – to express their concepts for the 6,000-square-foot, $2 million building they were asked to create, with space for a visitors center, a community center/meeting space with 24-7 wi-fi and computer access, and a 21st century library that allows for the high use, especially in the high season.

“I have a place here in Egg Harbor so I know how difficult it is to gain access with my phone, even,” Vander Heiden told the audience. He also talked about the need for a 21st century meeting place with the ability to telecommunicate.

“There’s a desperate need to grow,” Lang said of the library, which he said loans out the same number of items as the Baileys Harbor Library, which is twice the size of Egg Harbor’s library.

The building would go onto the 1.23 acres abutting Highway 42 in the heart of the village, on the site of the former Lena’s Sip and Chat Tavern (and six other watering holes since Lena’s closed in 1995).

James Vander Heiden and David Lang of Hammel, Green & Abrahamsen presented the three concepts for the project based on input already gathered from listening sessions held in 2012.

They explained that their task is to creatively use the trapezoid shape of the property with an inviting building that will be considered by many as “the Third Place,” with first place being home, second place being work, and the third place a destination gathering place where you want to see and be seen.

The first design is called Urban Village and was inspired by existing buildings in village that have repeating forms and are connected.

The second design they dubbed Three Houses, and it would include a stone wall portal and a second story for the technology area.

The third concept they call The Wave, and it was the favorite of the 30 or so residents in attendance at the meeting because it seemed to have the most flexible inner design for both community and library use.

The architects also floated the idea that Egg Harbor might want to make this building a star of the village.

“You have an opportunity to be a gateway to the door,” Lang said. “You get to the tell the story about what’s really upstream from here first.”