State parks in Door County are one step closer to implementing the Sporting Heritage Bill, which opens all Wisconsin State Parks to hunting and trapping starting Jan. 1, 2013.

Also known as Act 168, the act was signed into law in April 2012. It was co-sponsored by Door County’s Assembly Representative Garey Bies of Sister Bay.

The Department of Natural Resources (DNR) published a first draft of proposed rules and maps of areas open and closed to hunting and trapping in each state park in October. 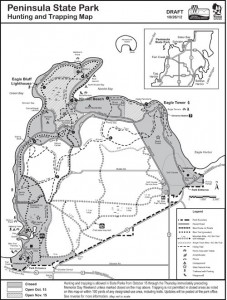 In that draft, hunting and trapping would be allowed in state parks from Oct. 15 through the Thursday before Memorial Day. Some busy parks, including portions of Peninsula State Park, were proposed to open for hunting on Nov. 15.

Allowing more hunting and trapping in state parks for a longer season worries some Door County residents about the impact the law will have on the local economy.

“We as a community have worked diligently to expand our shoulder season over the last five years and have been quite successful in doing so,” said Jack Moneypenny, president of the Door County Visitor Bureau. “The proposed hunting season of October 15 until the last Thursday before Memorial Day creates many challenges for our region. We’re not anti-hunting, we just think this is going to cause challenges for our tourism product and what we have to offer.”

Moneypenny was speaking at a DNR listening session in Appleton on Nov. 8, where people could address the DNR and Natural Resources board and comment on the proposed implementation of the Sporting Heritage Bill.

People from Door County spoke at the listening session with comments both critical and supportive of the act.

Some, like Dick Baudhuin of Sturgeon Bay, supported the act and the opportunity to hunt in more areas of Door County.

“Door County is getting more and more fragmented and the opportunities for hunting and trapping keeps getting narrower and narrower,” Baudhuin said. “Hunting and trapping conflicts are so minimal that I feel it would be insignificant in the state parks, particularly with the quiet areas or the closed areas that are recommended by the department.”

Others, like Gibraltar Town Board Member Dick Skare, worry that the fear of being in a park while others are hunting or trapping will keep people from visiting Door County.

“I’m concerned that we’re going to create a negative atmosphere, and people will not come to the state parks because of that, whether it’s actual safety issues or perceived,” Skare said.

The Natural Resources Board can only close areas to hunting and trapping if public safety or a unique plant or animal community is threatened.

Bies wrote a letter to the Natural Resources Board on Nov. 15 regarding hunting in Door County’s state parks. He asked the board to consider changing hunting dates in Door County parks to Nov. 1 through April 30, and to move hunting farther from Gibraltar School in Peninsula State Park.

Although they aren’t certain how the law will be implemented, DNR officials and park employees are preparing for the change.

“Our goal is going to be to make it safe,” said Peter Biermeier, DNR Recreation, Planning and Development chief. “We’re going to do whatever we can educating and informing people and chatting with hunters to make it safe, because that’s our main goal.”

Peninsula State Park superintendent Kelli Bruns said the park’s staff is reviewing hunting and trapping regulations so they can answer visitor questions about the Sporting Heritage Act. She plans on posting signs to educate visitors about hunting and trapping.

Whitetails Unlimited, a nonprofit conservation organization that works to preserve hunting traditions, donated about 50 blaze orange vests to Peninsula State Park for visitors to use during hunting season.

Even after the Sporting Heritage Bill is implemented, Wisconsin Assembly Representative Alvin Ott said the discussion probably won’t be over. He expects the legislature will look at the law again and make changes that give the Natural Resources Board more power to close certain areas and parks.