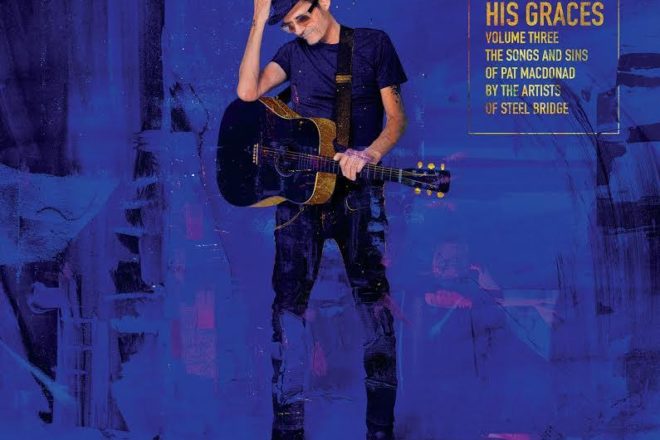 The phenomenal love and loyalty expressed toward pat mAcdonald is evidenced by the number and caliber of musicians participating in “The Songs of pat mAcdonald by the Artists of Steel Bridge Songfest” July 29 at Door Community Auditorium.

pat mAcdonald, a Wisconsin native who grew up in Green Bay, began his long career as a singer/songwriter and guitarist at an early age and started several bands before breaking away to Madison and founding Timbuk3. Timbuk3’s 1986 hit song “The Future’s So Bright (I Gotta Wear Shades)” garnered a 1987 Grammy nomination and launched a lifetime of music.

When mAcdonald moved to Door County, he became active in the community, getting involved in saving the historical Steel Bridge by throwing yearly concerts. This effort grew into the annual collaborative Steel Bridge Songfest each June, and two sister songfests, Dark Songs in October and Love on Holiday in February. Musicians gather the week before the festivals to take part in the annual Construction Zone songwriting intensive at the Holiday Music Motel.

mAcdonald has brought musicians of all ages and experiences together from all over the world into a songwriting family of more than 90 artists. In 2015, a number of Steel Bridge artists recorded 38 of his songs on a two-CD set called Begging His Graces to show their appreciation of mAcdonald’s songwriting and influence on their lives. Volume 2 followed, and this year the set will be complete with Volume 3. Nearing 120 tracks, Begging His Graces: The Songs and Sins of pat mAcdonald by the Artists of Steel Bridge Songfest, was recorded in studios all over the world, from New Zealand to Budapest, Los Angeles to New York City.

To celebrate the release of the complete set of Begging His Graces, 46 artists will perform 38 songs at the Door Community Auditorium.

So many artists wanted to be involved in this one-of-a-kind concert that a special DCA courtyard performance was added, which will include 12 pat mAc songs from artists ranging from James Hall to Deathfolk. Hot dogs, ‘not-dogs,’ chips, sides and beverages provided by DCA. Attendees are encouraged to bring a clearly marked dish to share. The pre-show Courtyard Concert & Potluck at is at 6 pm, followed by the main stage concert at 8 pm. Tickets range from $10 to $28. For tickets visit dcauditorium.org.