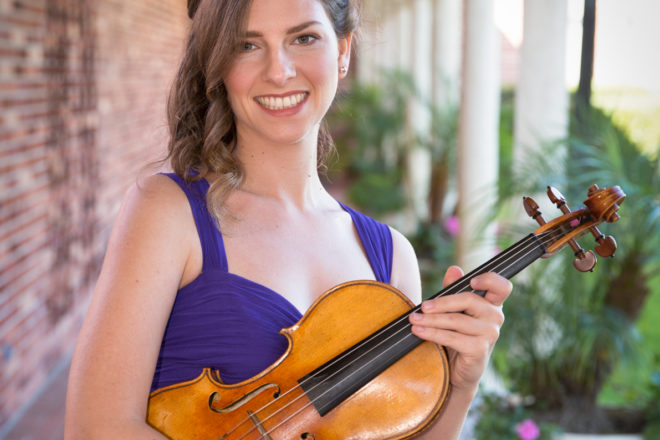 A concert for viola, violin and voice, with musician Batya MacAdam-Somer, DMA University of California-San Diego, takes place at the Unitarian Universalist Fellowship (UUF) of Door County, July 10 at 7 pm. A reception will follow the concert. Admission is by donation to the artist.

MacAdam-Somer, from a musical family in Houston, earned her Bachelor of Music from the Manhattan School of Music in 2005, and her doctoral degree from UCSD in Contemporary Violin Performance in 2014. She has performed with the California Chamber Orchestra, the San Diego Symphony, the La Jolla Symphony, the San Francisco Academy Orchestra and the Philharmonic Orchestra of the Americas, among others, and has participated in music festivals in Aspen, Leipzig, Lucerne, Ojai and San Diego.

She stops at UUF in North Ephraim on her way to the Baroque on Beaver Island music festival. Recent notable performances include a world premiere of a piece by Jürg Frey with the Palimpsest New Music Ensemble, “Songs of Sappho” at the Athenaeum Library in La Jolla, and a 75th birthday celebration of Chinary Ung at the Conrad Prebys Concert Hall in La Jolla.

MacAdam-Somer serves as a teaching artist and coach with the San Diego Youth Symphony in addition to maintaining a private studio and performing regularly in Quartet Nouveau and Baby Bushka, an eight piece all female ensemble celebrating the music of Kate Bush.