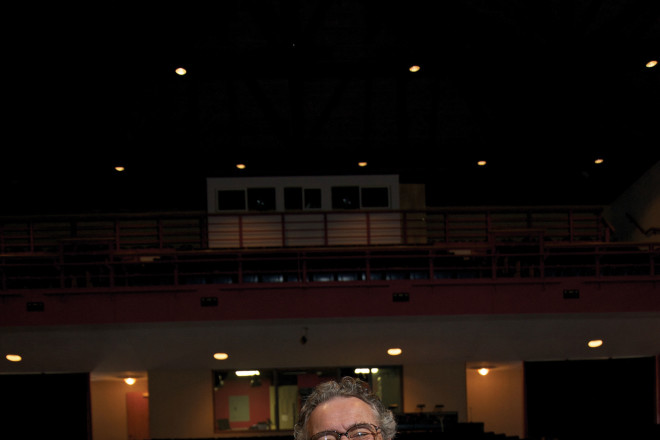 Before I speak to Victor Yampolsky, Music Director of the Peninsula Music Festival (PMF), I get more than a little nervous. The questions that I’ve jotted down to ask him just seem so simple, especially for a man who in 2010 will celebrate 25 years as PMF’s Music Director – a post that he has held longer than Thor Johnson, the founding director of the orchestra. What could I possibly ask this man in an interview that he hasn’t been asked before? I ponder this for days before calling. 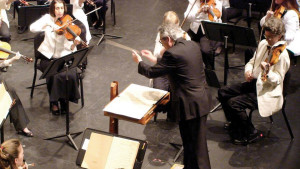 It turns out that I needn’t have worried. Yampolsky, a man who has conducted just under 80 symphonies, has every right to be smug – but every question I ask is met with an honest excitement, from his early start in music right up to his involvement with the music festival.

The son of two professional musicians – one of them being the famed pianist Vladimir Yampolsky – Yampolsky was born in the Soviet Union in 1942 and says he learned to read music around the same time he learned to read and write. “My favorite melody when I was a child was Rossini’s The Barber of Seville, and, at four years old, I managed to find those notes on my father’s piano,” he says, laughing. “I played those two notes all of the time!” For his seventh birthday, Yampolsky asked for and received a small violin, and a short time after began studying at a special school for gifted music students. The school enabled Yampolsky to study all of his regular school subjects as well as follow an intensive curriculum for the violin. By the age of 17 he was on his way to the Moscow Conservatory to study under the legendary violin master David Oistrakh. He graduated from the Moscow Conservatory in 1966, and began playing violin with the Moscow Philharmonic.

It was around this time that Yampolsky began to realize that he was interested in symphonic conducting. “Both David and my father had realized that my music interests were deeper and wider than simply playing the violin,” Yampolsky says. “Even when I was playing in the orchestra, my friends would say, ‘Victor, you should be conducting us!’” Yampolsky decided to go back to school in 1968, studying Symphonic Conduction with Maestro Nicolai Rabinovich at the Leningrad Conservatory in Russia until he graduated in 1972. 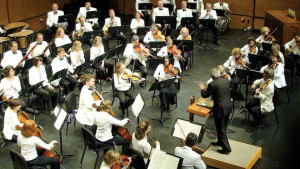 Just when one thinks Yampolsky’s life and early career couldn’t possibly be any more jam-packed with activity, we reach a crucial point in his story – his emigration from the Soviet Union to the United States in 1973. On a recommendation from conductor Zubin Mehta, Yampolsky found himself auditioning for one of the most famous American conductors of all time, Leonard Bernstein. Bernstein offered Yampolsky a scholarship to the Berkshire Music Center in Tanglewood, Massachusetts, and two weeks later, a position in the violin section of the Boston Symphony.

Yampolsky’s history with the Peninsula Music Festival begins in August 1985, when Robert Marcellus recommended him as one of the finalists for the PMF Music Director position. Marcellus was on the faculty at Northwestern University at the time and also served as one of the PMF’s board members. Yampolsky met Marcellus in Halifax, Nova Scotia in 1979 while participating in the annual Scotia Festival of Music. The two became good friends, and, eventually, Yampolsky found himself moving to Evanston, Illinois in 1984, where he became the director of the Orchestral Program at Northwestern.

“One day, Robert asked me if I had ever heard of Door County,” Yampolsky says. “I told him I had not, and he said, ‘Oh, it’s a very special place. They have this little music festival, and they happen to be looking for a music director.’” A year later, Yampolsky was in Door County conducting the final week of the 1985 Peninsula Music Festival season as part of his audition. A short while later, the PMF Board of Directors voted unanimously to appoint him. 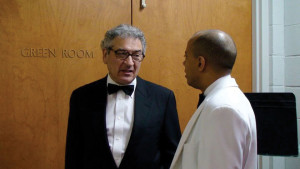 Yampolsky is quick to point out that while he is a music conductor at both his posts at Northwestern and at the Peninsula Music Festival, there is a major difference between his two roles. “The PMF consists of professional, hand-picked musicians that are devoted to their craft and come very well prepared,” Yampolsky says. “It is one of the best orchestras I’ve ever conducted. At Northwestern, I have to be a teacher, an interpreter.” He laughs before continuing, “When we’re in Door County going through our first reading of music, the level of quality is so high that we go through it at an astronomical speed – it’s like comparing a Boeing 747 to a turtle!”

Part of that level of quality has to do with the enormous amount of trust that exists between Yampolsky and the PMF orchestra. Sharon Grutzmacher, who has served at the Executive Director of PMF for over 18 years, is quick to say that there are more than a few reasons for this high level of trust. “First off, he’s a string player, which I think plays a huge role in his sensitivity on the podium. Second, he makes phenomenal use of rehearsal time, which is a huge deal to many professional musicians. Third, he honestly understands the orchestra as a business. He realizes the value of putting funds into commissioning an orchestral work or in securing a nationally-known guest artist to perform with the festival.” 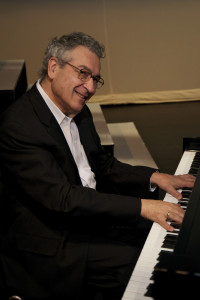 David Bell, a professional clarinetist who has been playing with the Peninsula Music Festival since before Yampolsky auditioned, shares Grutzmacher’s sentiment about the use of rehearsal time. “What I find most amazing about Victor is how much we can get done in a short time. He’s incredibly well prepared – a trait that’s difficult to have in an orchestra where you often see the music the day before a particular performance. He knows when to concentrate on something and when to let it go.”

Yampolsky elaborates, saying, “My ears notice imperfections, and I need to calculate immediately:  ‘Is this something that can be corrected? Is it because they don’t know my phrasing or my signals?’ I have to immediately decide – what is the most important thing to concentrate on?”

In the 25 years that Yampolsky has served as Music Director of the Peninsula Music Festival, the orchestra has grown from a chamber orchestra to a full symphony of 64 musicians. Grutzmacher does not mince words about his impact on the PMF. “To be honest, we are so lucky that he’s here,” she says. “He is of such high quality that he could choose to conduct anywhere during the summer – but he chooses to be in Door County, conducting the festival.”

Yampolsky confirms this, saying, “It’s not only a wonderful professional environment, but a personal one as well. There’s so much love and support from the orchestra members, from the board and the Sustaining Committee, and our audiences. Short of being in paradise, there’s nowhere else I’d rather be.”

He pauses, laughing, “Now that I think about it, that’s kind of ironic. When most people think of three weeks in Door County, they think of sitting on the beach every day – not three weeks of intense practice and the presentation of nine professional concerts. I guess we all have different views of paradise!” 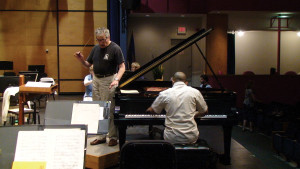 When the Peninsula Music Festival was founded in 1953, its board of directors made a commitment to commissioning and premiering a variety of original works for the orchestra. In his 22 years on the podium, founder Thor Johnson often used the PMF as a showcase for musical works:  seven world premieres, 29 American premieres, and 34 commissioned world premieres were heard throughout his career. Over the next 35 years, however, PMF commissioned only a handful of works. “The sheer work it took just to keep the festival running each year took most of our financial resources,” says PMF Executive Director Sharon Grutzmacher. “We were looking at a cost of about $1,000 per minute for a commissioned concerto. It just got to be too cost prohibitive.”

Grutzmacher relayed these thoughts to pianist Stewart Goodyear while the two were sitting backstage at the Door Community Auditorium after one of PMF’s summer concerts. Goodyear was at PMF for a one-week residency, and instantly became very excited about writing a piano concerto for orchestra that would be heard by an excited audience who had “welcomed him like family.”

In spite of the economic issues facing the organization – and symphonies in general across the United States – the PMF Board of Directors was thrilled to return to the festival’s mission of presenting new works by young composers. Goodyear’s 25-minute concerto has been completed and will receive its world premiere on Thursday, August 19. Every principal in the orchestra will have a solo in Goodyear’s piece, and Grutzmacher is very excited about sharing this part of the organization’s mission with new and old audiences alike.

“These kinds of pieces are a lot of time and work – but are so rewarding,” Grutzmacher says. “We hope that this concerto opens up the possibilities of doing even more with commissioned work in the future.”