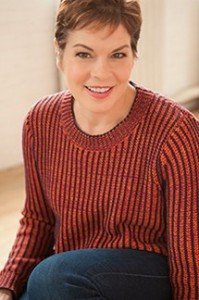 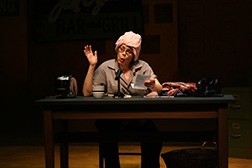 Minnesota native Michelle Myers Berg grew up in a neighborhood where unforgettable characters painted her “regimented” upbringing with pops of personality that spurred her love of character observation and in part, propelled her to become a classically trained actress.

Since 2007, she has brought those characters to the stage with her one-woman show, Blue Collar Diaries, which pays homage to the memorable individuals who drifted through her St. Paul, Minnesota neighborhood in the ‘60s and ‘70s.

But the show isn’t just about the quirky, loving characters of her youth. In fact, the undercurrent of her story happens to be the hidden life stories she uncovered about her parents, more specifically her Korean War veteran father.

Berg grew up the fifth of eight children in a culturally diverse neighborhood that boasted nearly 50 kids living on one city block. Her home life was controlled and left little room for expression, but on the streets of her St. Paul neighborhood, that didn’t appear to be the case.

“I wanted to write about the larger-than-life characters that were in my neighborhood and it was really more from the lens of a child’s view,” Berg said. “…My neighborhood was filled with people that, I think, worked incredibly hard, knowing that they weren’t going to ever have some sort of level of notoriety or worldly sort of goods.”

Though the appreciation and love Berg exhibits for her neighborhood in Blue Collar Diaries is evident in her portrayal of nearly two-dozen characters, that appreciation only came later in life after she became a mother and a number of difficult life experiences caused her to reexamine her childhood. In the process, Berg realized the “sacrificial love” that was prevalent in her community and among the neighbors who would do anything to help one another.

She also came to a better understanding of her father’s behavior and her parents’ decisions to withhold some of the more difficult parts of their history from their children.

“I had such a limited understanding of who my parents really were and it wasn’t until I wrote this show that I reexamined their lives from the lens of an adult and went, ‘Oh my gosh. I had no idea,’” Berg recalls.

Blue Collar Diaries initially started as a 45-minute fringe piece for the Minnesota Fringe Festival in 2007. At the request of the St. Paul-based History Theatre, which wanted to move the show straight into its next season, Berg was asked to write more about her father, with whom she had a “difficult” relationship.

Through what she calls her “adult lens,” Berg was able to piece together her late father’s history and in the process, came to an incredible revelation about who he was. Her final monologue in Blue Collar Diaries addresses her father’s death and his impact on her identity.

Berg is quick to point out that Blue Collar Diaries isn’t all doom and gloom. In fact, her goal is to make the show hopeful for those who have been through war or know someone who has.

“People in the military can seldom look at their own war; they don’t want to talk about their own war,” Berg said. “They don’t feel good about it … however, it is helpful for them to look at other wars. They feel a confederacy of connectedness to other people’s experiences through that because there’s similitude but it’s at a distance and so it is often cathartic to them. My hope is that my father’s experience and my own experience as his daughter would be something hopeful for somebody else.”

Blue Collar Diaries will show at Third Avenue Playhouse, 239 N. 3rd Ave. in Sturgeon Bay from Nov. 6 – 23. Shows are Thursday, Friday and Saturday at 7:30pm and Sunday at 2pm. Tickets are $25 general admission Friday and Saturday, $22 general admission Thursday evening and Sunday matinee, $10 for students under age 25, and $5 for children age 10 and younger. For more information visit thirdavenueplayhouse.com.