As stand up paddleboards, or SUPs, become more common along Door County shores, more paddlers are asking the same question: Do I have to wear a lifejacket?

According to Wisconsin Department of Natural Resources (DNR) conservation warden Todd Schaller, the answer is yes. 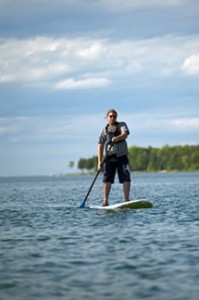 “The Coast Guard regulations and our regulations would indicate that they have to have a lifejacket on board,” Schaller said. “It would have to be a wearable type lifejacket. It doesn’t have to be worn although it would be our safety recommendation that it would actually be worn.”

The Coast Guard and the state of Wisconsin consider SUPs to be vessels because they’re used for transportation. People on SUPs have to have a lifejacket on the board or on their bodies, even if they’re leashed to the board, or risk a $162.70 fine.

But a call to the Sturgeon Bay Coast Guard station threw a wrench in what should be a simple answer. The question was whether a paddleboarder has to wear a lifejacket, and the answer was SUPs aren’t considered vessels, and a lifejacket isn’t needed. [Full disclosure – I didn’t say I was a reporter, and didn’t take the person’s name.]

Different instructions from the DNR and the Coast Guard are just part of the confusion. Since paddleboards float, shouldn’t having a leash connecting your ankle to the board count as a personal floatation device? And what good is a lifejacket in an emergency if it’s strapped to your SUP (which paddlers sometimes do to prevent the lifejacket from floating away)?

“I’m kind of torn on it because, yes, I think that it’s important for people to wear a PFD [personal floatation device] when they’re on the water,” said Casey St. Henry, program director at Bay Shore Outdoor Store. “I wear my belt PFD – it’s not restrictive, it’s pretty great. But by the same token, I also wear a leash and that’s going to physically attach me to my paddleboard. If I’m attached to my board why do I need a separate floatation device?” 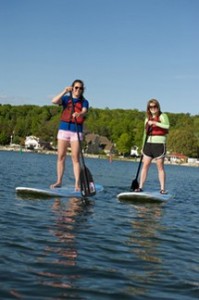 A little more confusion: although SUPs are very similar to surfboards, they’re treated differently under the law. The Coast Guard does not consider surfboards to be vessels, so lifejackets aren’t required on board.

According to its website, the Coast Guard only requires SUP users to have lifejackets when they’re outside of the swimming, surfing or bathing area, which St. Henry said doesn’t exist in Lake Michigan. Schaller said you only need a lifejacket if you use the board for transportation, not if you use it as a toy.

No matter where you are and who’s on patrol, it’s safer for you and your wallet to grab a lifejacket when you head out with your SUP.