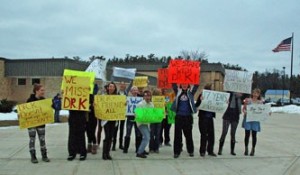 Gibraltar High School students started off the school day on Dec. 2 by holding a rally for former Principal Kirk Knutson. The students said they were upset about being kept n the dark about Knutson’s resignation last month. They said they would like him reinstated.

Parents, teachers and students gathered at Gibraltar High School on Tuesday night to show support and seek answers regarding the abrupt and unexpected resignation of school principal Kirk Knutson. The Gibraltar school board held a closed meeting to discuss the situation while 81 community members signed in their support for Knutson before leaving the room as the private discussion began.

“We’re going to spend as much time as we have to tonight to formulate where we are. We’ve all got questions in our mind as well,” said the board to the community before the closed session.

Parents then filed into the hallway and discussed what little information is available.

Knutson served in the Gibraltar school district for 17 years before his sudden resignation on Monday, Nov. 24.

“My personal feeling is that a 17-year veteran of this school district simply doesn’t get up on Monday, walk in and leave at noon. It’s just beyond logic,” said John Cox, who worked as Knutson’s aide for 10 years prior to his retirement. “The situation has fractured the community and it has fractured the school board,” said Cox.

The community, as well as some of the board members, does not know what caused Knutson’s prompt departure. Upon meeting with Gibraltar Superintendent Tina Van Meer on Monday morning, Knutson signed his resignation and left the building without taking any of his belongings. The school board accepted the motion to “approve a letter of resignation from employment” on Monday, Nov. 24, although no name was given to the employee resigning at the time.

With Knutson’s resignation, the Gibraltar secondary school office now has two out of the usual five employees, “and that’s not enough to handle 300 kids,” said Cox.

“At this point we have to trust the board. We have to allow the board to work. They know how we feel. It’s very clear. If they choose to do something different, then we cross that bridge,” said Chris Hecht of Sister Bay.

Posters lined the wall of the meeting room in support of the principal. “This manifestation is to show that it’s so out of character. It’s just not like him,” said Helen Ingsten-Anderson. “There are many teachers that are showing up. They basically have had gag orders put on them and for them to show up here, they are risking a lot more than us parents.”

The community took to Facebook to mobilize in the short time that this came to light during the Thanksgiving holiday. The Facebook group “Community Support for Kirk Knutson” has more than 600 supporters while the student group “We Miss Dr. K” has more than 300 supporters.

Superintendent Van Meer sought to release a letter describing the situation to parents in the community on Monday but a letter has not yet been sent.