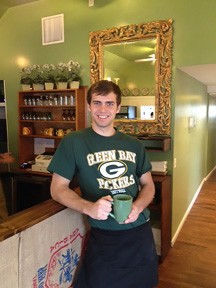 It’s an early Sunday morning at The Chef’s Hat café
On Highway 42 in Ephraim, just south of Sister Bay
Server Erik Emanuelson is preparing the day’s jokes
A custom side that he serves up with meals to today’s café-going folks.

Erik’s been with the Ephraim eatery for seven years,
An easy option since his hometown of Sister Bay is so near.
He started out doing dishes and bussing tables for a while
Before exercising his talents in serving up good food and a great smile.

The Gibraltar High alumnus recently achieved a degree from St. Olaf College,
Studying chemistry and biology, which requires a great deal of knowledge.
His next job will likely be as a scientist in a research lab,
Though in the future it’s a healthcare job he would love to nab.

But in the meantime he’ll keep making people laugh,
And playing soccer and music, including the bass guitar and sax.
In fact you might have heard him in the Local Yokels band,
A new group of musicians of which you’ll probably soon be a fan!