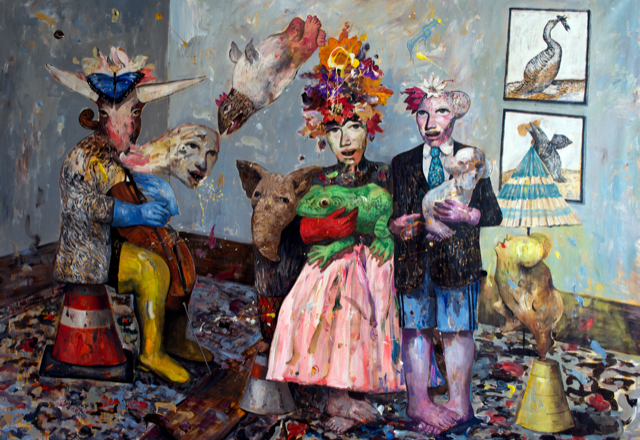 “Just a Concert” by Sinan Hussein for the “Mitli Mitlak” art exhibition that accompanies the “Right to Live” performances. Image courtesy of Andrea Rude McKenzie.

It can be easy to feel cut off from the wider world in Door County. The geography of a peninsula equates to some degree of isolation. By car, there are only three ways people can leave the peninsula. Sure, we can feel in touch with the world by reading international news, listening to NPR and watching news programs, but do we actually feel connected through those avenues?

No, not always. Maybe we feel educated, but not connected.

Despite our geographic isolation, Door County is lucky to draw creative people into our midst – people who open up our world a little bit more.

One of these is Habibah Sheikh, a Lebanese performance artist who describes herself as a nomad. Having spent decades living in countries throughout Europe and the Middle East, she has worked in refugee communities and gleaned various artistic techniques along the way. While traveling, she was driven to create the Right to Live project: a way to share the refugee experience with audiences in other communities.

There are two components to Sheikh’s project: the Right to Live performances with local actors at Third Avenue Playhouse and the Mitli Mitlak (Like You, Like Me) exhibit at the Miller Art Museum, whose artwork directly correlates to the scenes in Right to Live.

Right to Live focuses on narratives of travel and displacement lived by refugees whom Sheikh encountered during her work with refugee populations. Sturgeon Bay is where everything is coming together for the first time.

The relatively short time the group has had to work with the script has meant the actors had to quickly delve into the refugee experience. Sheikh said of the cast, “The people here really help each other and are very humanistic, and they have a connection and heart for this subject.”

One way Sheikh helped the actors to connect more with the subject was to put them in touch with refugees via Skype during rehearsals. “They were explaining to us how they were walking, what was going on in their thoughts,” Sheikh said. She went on to explain that talking with the refugees gave the actors a deeper sense of what they were trying to convey. One particularly evocative image came from a refugee who explained how it felt to have the key to his house in his pocket while walking away from his home, knowing that he was never, ever going back.

They also spoke with a Syrian refugee who’s living in Portugal. Due to a bureaucratic error, his monthly refugee payment was stopped. So, as well as being displaced, that small piece of financial comfort had also been taken from him. Sheikh said that his health is deteriorating as a result, and “he needs to secure a home and have peace of mind to go through therapy.” Sheikh and the cast then set up a GoFundMe page on his behalf (gofundme.com/manage/please-help-syrian-performance-artist-refugee).

The visual-art component of Sheikh’s project is Mitli Mitlak, the exhibit at the Miller. The title is Arabic for “like you, like me,” meaning that people have more commonalities than differences. The exhibit features the work of visual artists from the Middle East, North Africa and of Arabic descent. The contemporary works include painting, photography and drawing, all centered within the narrative framework of Right to Live. The artwork further tells the stories of refugees, displacement, war and contemporary visual culture.

The artists include Hani Alqam, Thameur Mejri, Sinan Hussein, Wael Darwish, Ahmed Nagy, Klaudja Sulaj, Lucas Paleocrassas, Abbas Yousif, Basel Uraiqat, Mohammed Al Hawajri, May Murad, Haitham Khatib and Hassan Meer. Members of the public may buy the artwork in the exhibit, and proceeds will be split between the artist and the refugee cause.

This exhibit has been a couple of years in the making. Sheikh researched artists and wrote them letters to gauge their interest in the project. She sent them the script for the performance, and they dialogued about the subject matter. One of the artists she corresponded with was in Palestine. Sheikh said, “Bombs were dropping a lot [in Palestine] last year, and dialogue would stop … It’s beyond words.”

“The artwork is their way of resisting,” Sheikh said. “Everybody wants to realize their dream. They have to accomplish what they want to accomplish. Nobody wants to be a victim of circumstance. Even the bombardment would not stop them from realizing their dream, so if I can give them this exhibition in the U.S., Europe and the Middle East, it would raise the value of their art, and they could sell pieces as well and grow as artists.”

Sheikh said that there’s a lot of misinterpretation of refugees and the refugee experience when people hear these stories simply as blips on the evening news or read about them in newspapers. Projects such as Right to Live and Mitli Mitlak are necessary “because they provide another type of information than we’re used to hearing,” Sheikh said. “Instead of taking about something in a cerebral way, they take it in different channels.”

With this project, Sheikh brings the refugees’ stories – directly from the refugees – into contact with the local cast and audience. Through these stories, she hopes audiences can see and feel that “there’s no difference between them and us. The refugees are doctors, lawyers. No matter how much struggle and turmoil they go through, they still try to be the best type of person they can be.”

When theater and art are transformative, they challenge us – the viewer, the audience – to see something in a different way and to empathize with people outside of our everyday lives. In doing so, the world doesn’t seem as big, and the county not as isolated.

Mitli Mitlak will be on view in the Miller Art Museum’s main gallery through April 15. An opening reception is scheduled for Saturday, March 2, 3-4:30 pm.

Right to Live will be performed Friday, March 1, and Saturday, March 2, at 7:30 pm; and Sunday, March 3, at 1 pm. A documentary screening of Citizen Xenos will follow the Sunday performance. Performances are free and open to the public. For more information, visit thirdavenueplayhouse.com.