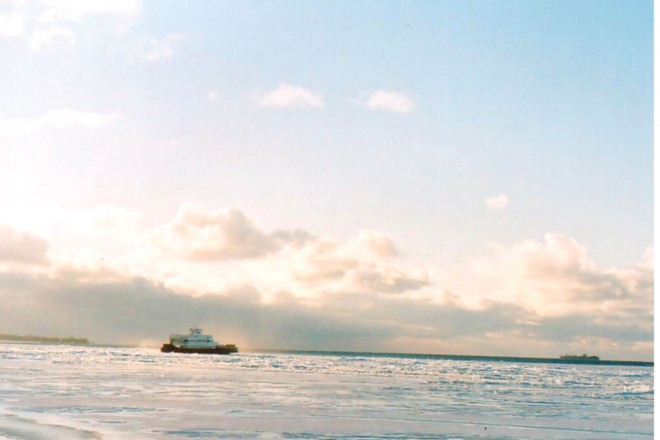 The distance from Northport pier, on the northern tip of the Door peninsula, to Washington Island’s Detroit Harbor is just a few miles, but in so many ways the two may as well be worlds apart.

Between the shores run the foreboding waters of Death’s Door, which earned its moniker in the days when sailing vessels lacked the power and technology to maneuver as they do today. Yet it’s not just the waters of Lake Michigan that separate the two worlds, nor the dangerous shoals lurking beneath them. Somewhere in the vaunted expanse lie so many of the conveniences and connections that those of us on the mainland take for granted and Washington Island residents have chosen to leave behind.

The lone tie to the mainland is the Washington Island Ferry Line, which has transported people and cars between the shores for 82 years.

Some moved to the island to escape the congestion of the city, while others were never compelled to leave, but to maintain their treasured isolation they rely on the constant connection the ferry line provides, according to ferry captain and town supervisor Joel Gunnlaugson, “It is the lifeline to Washington Island.”

The line operates five vessels, with ferries leaving every half hour in the peak summer season and making at least 10 trips daily from May through October. Visitors may think of the ferry as mere transportation, a way to get oneself to the island and for some of the 700 or so Washington Island residents to reach the mainland. But the ferry brings much more to island residents. “Everything you can think of comes on the ferry. Construction supplies, the mail, prescription medicine,” Gunnlaugson said. “We’ve even taken modular homes across.”

Since 1940, when Carl Richter and his son Arni bought the ferry line from founder Bill Jepson, this lifeline has been operated by the Richter family. Today, Arni’s stepson, Richard Purinton, is the company’s president. Asked if there’s a great deal of pride in administering such an important service, he offered a different word.

“There’s pride,” Purinton said. “But the best word to describe it, I think, would be more of a responsibility. It’s a high-profile business I guess. Everyone’s daily life on the island is impacted by it. We bring food, products, mail and medicine. We bring the freight that keeps businesses going, so we need to be dependable and on time.”

Jepson’s first vessel, a wooden boat christened the WISCONSIN, could scarcely pass for a ferry by today’s standards, but it was a start. When he began using it as a car ferry in 1923, it carried just four autos, one big and three small. Soon he would expand his service with a new boat, the WELCOME, nearly doubling his capacity to seven cars, but still little compared to what we recognize today.

In those early days, much was different about the ferry experience. Cars were loaded on wooden planks and tied down to the deck. Paging through the pictures in Purinton’s 1990 book, Over and Back, one can’t help but question the structural integrity of some of the wooden piers used at the time.

The line grew under Jepson, but for most of the first half of the century winter crossings of Death’s Door were sporadic at best. When the ice came, people and supplies had to venture over it, not through it – a risky proposition.

Over the years, there were many close calls, and at least one tragedy in 1935. Five young men who had gone to Ellison Bay to play a basketball game were returning late at night, driving over the ice. They lost their way, broke through the ice and drowned. One of the men, John Cornell, was the brother of Arni’s future wife, Mary, and Purinton said the tragedy was a driving force in Arni’s efforts to provide better winter transportation.

So when Jepson finally sold the line to the Richters after providing 17 years of pioneering service, one of their earliest goals was to build a winter ferry. The father and son would add the first steel-hulled ship, the GRIFFIN, to the original wooden ferries in 1946, and the isolation of winter life on the island was relieved, at least a little.

In addition to its steel hull, the GRIFFIN had more power and more weight than any of the line’s previous ferries, and it brought some consistency to winter service with its ability to plow through the ice. Yet even with the GRIFFIN and the subsequent launch of the C.G. RICHTER four years later, captaining vessels through the ice wasn’t an easy task.

“In the old boat [the C.G. RICHTER], you were always at the mercy of the ice,” said Captain Ken Berggren. “If you got caught in it, you could get swept far off course and into shallow waters or out into the lake.”

Purinton agreed, noting that the always-moving ice can change radically from one day to another. Where it’s two feet thick one day it will be broken up the next, he said. “Ice can work in our favor by knocking down the seas, but it can also be dangerous if you get caught in it when it’s moving two to three knots,” he explained. “It’s the scariest situation you can have because you don’t have control.”

Kathleen Sorensen, a 28-year island resident, is a fairly frequent ferry passenger, and said the winter trips can be humbling. “When you’re cutting through the ice, you realize the power of the boat and especially the power of the ice,” she said. “When the ice is flowing, it’s the boss, and you really get a sense of diminished importance.”

With the addition of the newest ferry, the ARNI J. RICHTER in 2003, those worries largely disappeared, making the icy trek a little more fun for the captain and his passengers. “I wait all summer for the ice to come,” Gunnlaugson said. “That ice might be in a big 10 foot by 10 foot chunk when you hit it, and when it comes out behind you it’s small enough to put in a martini glass.”

Purinton said the building of the break-wall at Northport Pier in 1994 greatly improved docking safety, and shortened many winter trips. “There were times in the winter when you would make it across in 45 minutes, but it would take two hours to go the last couple hundred yards to the pier,” he said. “The ice would be packed into the pier and driven down to the bottom and was tough to plow through.”

In the C.G. RICHTER and the GRIFFIN, trips could be long and weary. “There were times it could take six to eight hours to get across,” Gunnlaugson said. “So people came prepared with lunches and board games. There were a lot of cards played in those days.”

Sorensen said her longest trip was three hours. “It wasn’t too bad,” she said. “I usually just brought a pillow and took a nap.”

By contrast, “The ARNI J. RICHTER changed the experience a lot,” Purinton said. “It’s a lot heavier for operation in the ice and it can handle 18 vehicles. And you don’t have those real long trips.”

He summed up the difference between the ARNI and the C.G. as “like going from driving an old VW Bug to a luxury car.” The new boat has twin 1,000 horsepower engines and weighs about 280 tons, a far cry from Jepson’s WISCONSIN, which was powered by just one 60 horsepower engine.

The power of the ARNI J. RICHTER enabled the line to add a second winter run last year, allowing Island residents to go the mainland to shop or visit the doctor and return the same day. In the old boats, they made just one run per day, so folks would have to stay the night. Purinton said the boat is usually near full capacity most of the winter.

“There are days we have just a couple of riders,” he laments. “But there’s always somebody who needs to get across. Plus, there’s the mail and freight in the morning and UPS in the afternoon. Like so many businesses in the county, we’re open year round, but we depend on the summer months to stay in business. The winter is a losing proposition, even with the new ferry capacity. The more you go out means more expense, more exposure to conditions and more wear and tear.”

Purinton said he thinks they have a pretty good track record for being on time, and Sorensen agreed. “With the new boat you hardly ever get delayed or canceled,” she said. “There’s always a chance if the wind is blowing just right, but it doesn’t happen often.”

For some, the dependability of the ferry’s service is especially important, as longtime visitor and recent immigrant to the island Jim Goodwin explained. “I’ve got a good friend who needs to go over five days a week for radiation treatments,” he said. “The hospital arranges it so he can take the 8:00 am ferry over, get his treatment, then catch the 11:00 am ferry back.”

But Goodwin, like many others, said he rarely leaves the island. “There are a lot that probably don’t leave the island once all year,” he said. “I’ve heard stories of men who were drafted into WWII and it was the first time they ever left the island. You just get used to it up here.”

For  mainlanders, the ferry is a big part of any trip to the island. In the summer months, they might find themselves sharing the open air of the top deck with curious children pointing wide-eyed at the expansive lake or staring in awe at the massive wake trailing the ferry.

On days with rougher seas, kids can be seen making a game of getting splashed by the waves as they crash over the front of the ship deck. For little-league baseball players, the annual game against the Islanders is the season highlight, and it still is when they’re playing in the Door County men’s baseball league ten or so years later.

But as much as they look forward to visiting for a day or a weekend, the idea of island life remains an enigma to most, and taking that vital ferry home is a return to civilization. For islanders, the perspective is much different.

“Now that we have two ferries a day in winter, some people complain because it brings more visitors,” Goodwin said. “The isolation up here is beyond the comprehension of a lot of people. They’re afraid of getting stuck up here. For me, the only time it bothers me is if I’m stuck on the other side, on the mainland.”

Fortunately, the dependability of the Washington Island Ferry Line means people can have it their way, without getting stuck on either side.