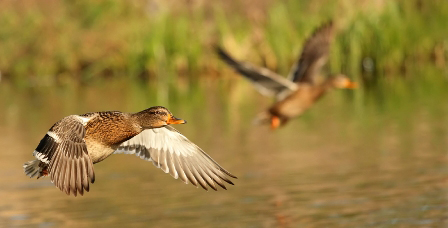 Of the species-specific population estimates for the three top breeding ducks in Wisconsin, mallards showed the largest increase from 2017. Photo by Wisconsin DNR.

The total 2018 continental duck population estimate is down 13 percent compared to 2017 at approximately 41.2 million ducks. Despite nearly all species seeing some decline compared to 2017, almost all are still above or near their long-term averages.

Nearly 75 percent of Wisconsin’s duck harvest consists of mallard, wood duck, blue-winged and green-winged teal. The Wisconsin breeding duck population estimate of 439,397 represents a decrease of 8 percent compared to 2017, and is near the long-term (45-year) average. Of the species-specific population estimates for the three top breeding ducks in Wisconsin, (mallard, blue-winged teal and wood duck) mallards, showed the largest increase from 2017.

“With the combination of a late cold spring followed by dry conditions and above average temperatures this summer, things were drier this year across much of the breeding grounds and is likely the reason for the decline in numbers,” said Taylor Finger, Wisconsin Department of Natural Resources migratory bird ecologist. “Most of these populations remain healthy and are either near or above their long-term averages, and hunters should expect another good year of hunting.”

As a reminder, waterfowl and other migratory bird hunters must register each year with the federal Harvest Information Program (HIP), which places them on a list of hunters that may receive a mailing asking them to provide a summary of their harvest. HIP registration is free and can be done at the time hunters purchase their licenses, but can always be added later on if a hunter decides they may pursue migratory game birds.