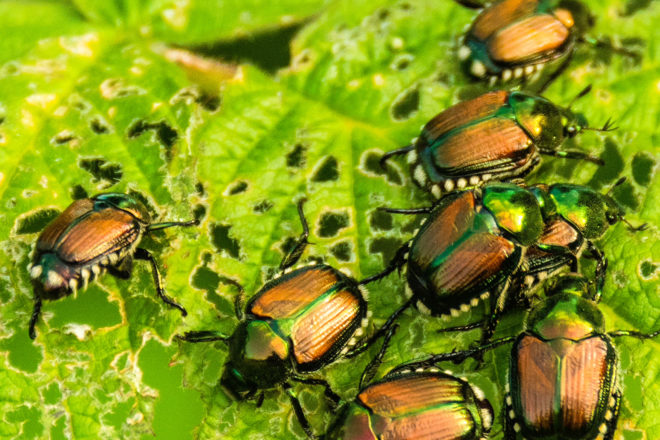 The Japanese beetle has been in the U.S. for about 100 years. It has been a major problem in southern Wisconsin for the last few years, but so far populations in Door County have been low.

Recently, I’ve started to see more of them flying around. As with everything, we don’t know if populations will increase or not, but for now it is important to know what they are and ways to deal with them if they start to become an issue.

Adult Japanese beetles are about 1/3 of an inch long, metallic green with copper-colored wings. There are six patches of white hairs along the sides of the body and at the posterior end.

The adult beetles feed on more than 300 fruit, vegetable and ornamental plants along with many field and forage crops, trees and weeds. They target the leaves and flowers of the plants, consuming the leaf tissue between the leaf veins leaving a skeletonized leaf behind. Damage to trees is often cosmetic, but other plants can be killed. Japanese beetle adults are typically active from July through September.

The life cycles of the two pests are relatively similar, so lawn treatments for one will also target the other. Both species overwinter as mature grubs.

Unfortunately, control of this pest is not easy. The adult beetles can fly long distances, so even if they overwinter in one location, the adults can travel elsewhere to feed. For this reason it is not recommended to target Japanese beetle grubs at this time. Additionally, the adult beetles produce a scent (pheromone) that attracts other Japanese beetles. This aggregation pheromone leads to masses of beetles in a single area.

At the early stages of dealing with this pest, here are some things to keep in mind:

When it comes time to protect your plants, in a small-scale situation, the very best thing you can do is knock the beetles into a pail of soapy water. The best time to do this is in the early morning or evening. The beetles are most active from about 9 am – 3 pm, so during that time they are more likely to fly away than drop into the bucket. This will need to be repeated every day while the beetles are active.

Row covers of fine mesh or screening can exclude beetles from the plants. The screening should be fine enough that the beetles can’t get through, but not so fine that water, wind and light are excluded. The netting can be connected to the ground or to the base of the plant.

There are many insecticides registered for use against Japanese beetle. Before turning to chemical controls, however, it’s important to note that the chemicals will kill the beetles that are on the plant at that time, but it doesn’t prevent new beetles from arriving the next day. Products that contain kaolin clay can create a barrier that repels the beetle from eating the leaves on some plants. Insecticidal soaps are most effective against soft-bodied insects, so they are not recommended for use against the hard-shelled Japanese beetles.

Before using any insecticide, make sure to read the entire label to ensure it is registered for use on the plant you are trying to protect and that you use the product in the most effective and safe manner.

There have been many invasive insect problems this year, but with a little creativity and proactive, informed management decisions, you can still have a beautiful yard and abundant harvest.