After three decades in the industry most restaurant owners aren’t too keen on re-evaluating their business practices, especially if they’ve been pretty successful with their methods. But when Dick and Carol Skare, owners of The Cookery in Fish Creek, pursued Travel Green certification at their daughter Courtney’s persistent urging, they were surprised with the result. 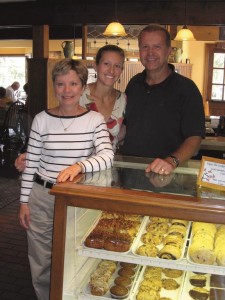 “I actually found it to be quite reinvigorating after doing this for 30 years,” Dick said.

Travel Green Wisconsin is a voluntary program launched in 2006 in which businesses can apply for certification by undergoing a comprehensive self-analysis of their business practices and resource usage. The program reviews, certifies and recognizes tourism businesses and organizations that have made a commitment to reducing their environmental impact.

Applying for certification isn’t as simple as filling out a form, Dick explained. They had to examine their business from a consumption standpoint, calling Wisconsin Public Service and the town’s sanitary district to find out exactly how much electricity and water they were using. But they didn’t see the effort as a burden. Rather, it re-acquainted them with the details of their business, and for Courtney it became a crash-course in the nitty-gritty of operating a restaurant.

She returned to Door County with her fiancé, Andrew Holdmann, last year after getting her bachelors degree in history and communication arts from the University of Wisconsin-Madison, as well as a Masters in Education Administration and Policy Analysis from the university. Dick and Carol are grooming her to take over more of the business, and the Travel Green process turned out to be a great educational tool. 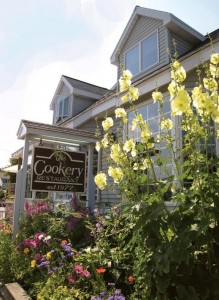 “Travel Green is intriguing, it just gets you thinking more about all aspects of what you’re doing,” Courtney said. “For me coming into the business it’s very informative.”

The Skares were pleasantly surprised by how many requirements of the Travel Green program they had long incorporated into the business, either because they had to or to save money. They’ve been avid recyclers for years and use reclamation units to recycle heat produced by the kitchen. Like many Door County restaurants they have long featured many items made from local products like cherry pies and whitefish. It wasn’t until going down the certification route that they realized so much of what they were doing were steps toward a greener restaurant.

The journey began for the Skares with Courtney’s urging over the summer of 2007, then picked up intensity in November when they attended an Eco Summit in Green Bay. The Skares weren’t sure what to expect, but they say they came away with a “whole new idea of what ‘going green’ meant.”

Later they attended a program at the Algoma Farm Market Kitchen to get information about finding and buying locally-produced products.

They became Door County’s 15th Travel Green Certified operator Feb. 20 (two more have since received certification), but the journey didn’t end there. “Going Green” has come to be about much more than getting another certificate to hang on the wall. It has spurred them on a deeper exploration. Carol says she finds herself reading everything she can get her hands on and continuing to investigate ways to reduce the restaurant’s impact on a peninsula that leans so heavily on its natural environment for economic survival.

In early March the elder Skares visited their youngest daughter in Thailand, a trip that further informed their perspective on American consumption habits.

“We realized just how wasteful we are here,” Carol says. “And it’s a lot of things you wouldn’t think of. ‘Hot’ water for a shower there is lukewarm to us. They don’t have our big supermarkets with packaging on absolutely everything. They have a fan blowing on the produce at the market to keep the bugs off instead of chemicals.”

In some instances American health codes preclude businesses, and especially restaurants, from using many of the common-sense practices the Skares saw in Thailand. Food preparation, storage, and temperatures are tightly regulated, so finding less resource-intensive methods takes some work. They’ve found environmentally friendly cleaning products and continue to upgrade to more energy-efficient equipment, and they try to reduce water usage where possible, including one often-overlooked avenue of wasting the resource in the food-service industry.

Water at The Cookery will now be served upon request, something the owners expect will be hard for some long-time wait staff to get accustomed to. Much of the water served automatically at restaurants goes untouched, and each glass requires cleaning and ice (which also takes energy to make). Eight of the 15 largest consumers of water in Fish Creek are restaurants, so any conservation efforts in the industry have a significant impact.

They have some concern that servers or customers will see it as lower quality service, but they are re-writing their menu to inform the customer about the reasons for many of the new practices, one of which is a more concerted effort to use local producers.

Sourcing products locally cuts down on the gas, pollution, and packaging used to transport goods, and helps keep more money in the local economy and more area land in agriculture. But it also presents unique challenges.

“We’re not a big enough restaurant to go 100 percent organic, and it’s not easy to use local sources by any means,” Courtney said. “Part of it is knowing the seasons and planning when to order certain items from the larger distributors and when you can expect to find it locally available. We can’t constantly change our menu the way some specialty restaurants might.”

Courtney says it requires more labor to source locally and requires a lot of organization, but it’s definitely worth it. Visitors want the local products, and there’s a fulfillment that comes with supporting friends and neighbors. Plus, they say it just makes a better tasting product.

Wherever the food comes from, restaurants produce massive quantities of food waste, and the Skares are looking for a way to keep theirs out of the garbage cycle. Courtney said they are investigating options for getting those scraps to a local gardener who would pick them up and add them to their compost.

Dick said it was an eye-opener for him when it became mandatory to recycle in Fish Creek years ago. They’re always trying to recycle more, and today the quantity of waste and recycling produced are running neck and neck. Once it all went in the trash.

“I’d hate to contemplate what it would be like if we didn’t recycle,” he says now.

But after going through the Travel Green process, they’ve broadened their idea of recycling. It’s not just about what they put in a dumpster, but what they find other uses for. They re-use mail-order boxes, compost food waste, and will now even save coffee grounds to use in gardens. Courtney said she hopes the changes made at the restaurant will go home with their employees and customers to incorporate into their own lives.

“We always thought we were pretty conscientious, but Courtney really started putting the pressure on us to go through the process,” Dick said. “Now we see how far this goes.”

The Cookery notched 61 points in the program, 31 points beyond the threshold for certification. They say they’ll continue to pursue more ways to improve their stewardship, and hope more Door County businesses will take on the challenge.

“Bayfield has far more certified businesses than we do, and it would be great if we could compete with them,” Dick said.

The score at this issue goes to press is 29 for the Bayfield area, Door County 17. Who will be next to embark on the journey?