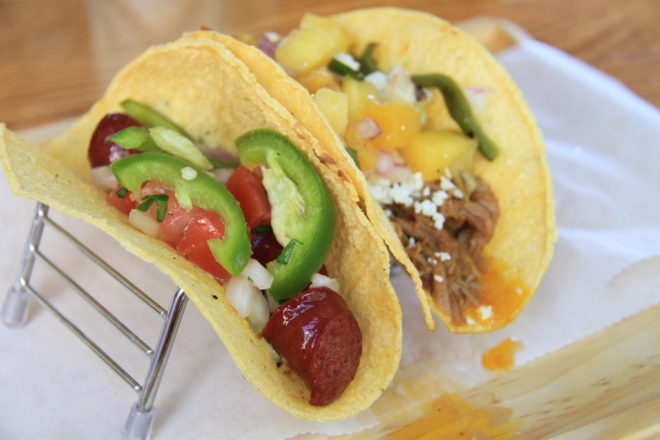 The Chi-Dog and Al Pastor tacos. Photo by Aleah Kidd

Al fresco atmosphere and casual, quick dining is what visitors are used to finding on the patio at the corner of Hill Street and Highway 42 in downtown Fish Creek. Opened at the end of June, Taco Cerveza is carrying on that tradition with a new bar and eatery focusing on gourmet tacos. The location formerly was home to Stillwater’s Grill, which closed last fall after 19 years of serving burgers, brats and hot dogs. Since then the trio of Taco Cerveza owners has been hard at work in preparation to launch the new restaurant, which is being recognized as Wickman House’s less formal “little brother.” The name Taco Cerveza, which translates literally to taco beer, gives the impression of the laid-back approach to food you can find at most fast casual diners but don’t be fooled: the cool, casual ambiance contrasts with the menu offerings which offer some serious flavor. 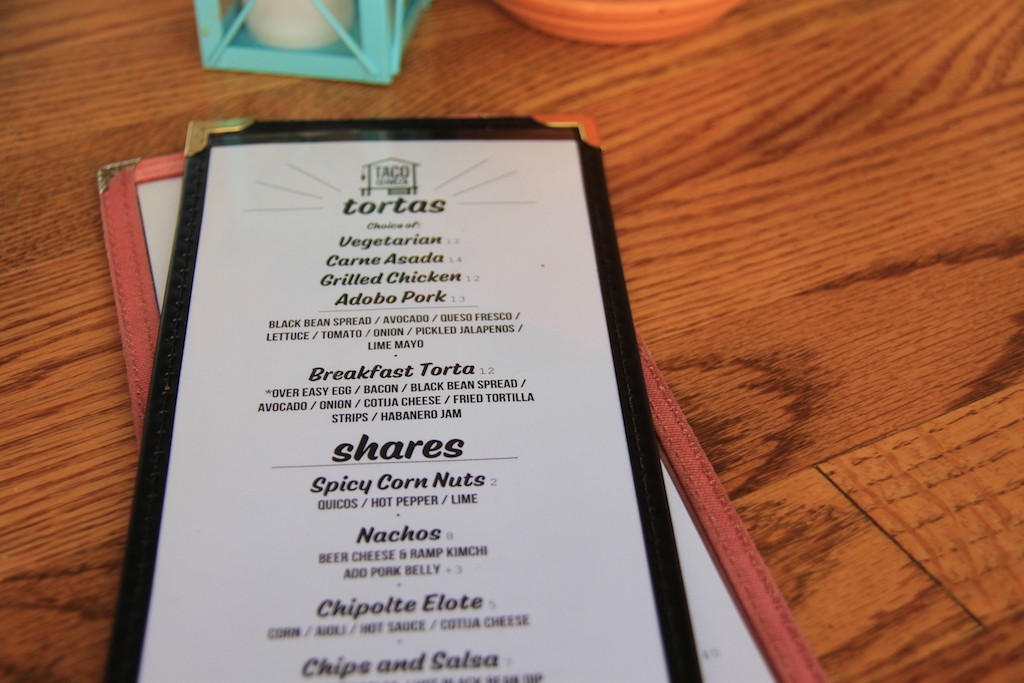 The taco menu embraces various cuisines including Vietnamese with the pork belly Banh Mi and Korean with the bulgogi beef Korencio; Mexican and Latin American with the flank steak Carne Asada and pork shoulder Al Pastor; and of course midwestern with the Waseda beef Chi-Dog and beer battered whitefish Wick Fish. The Chi-Dog caught my eye as a unique menu item using a Chicago-style beef frankfurter.

“As we were renovating the space people kept asking us if we were still going to have the Chicago hot dogs that Stillwater’s sold all those years, so we decided to include the hot dog taco,” said Travis Ward, part owner alongside Linden Ray of Mink River Basin and Mike Holmes of Wickman House and Trixie’s.

I ordered one of the Chi-Dog’s and one Al Pastor to satiate my late lunch cravings and turned my eye toward the drink menu. I was surprised to find the wine list had nearly the same amount of canned options as those from bottles, plus one red wine on draft. “People shouldn’t be scared of canned wine,” server Emilie Krueger suggested, “using a can is good for the wine because it lets in less light than bottles, they are easy to recycle and it’s just an easy option for wine drinkers in summer months.” Convinced, I sampled a tall thin can of Pool Party grenache blend, which did seem fitting for the warm and sunny afternoon. 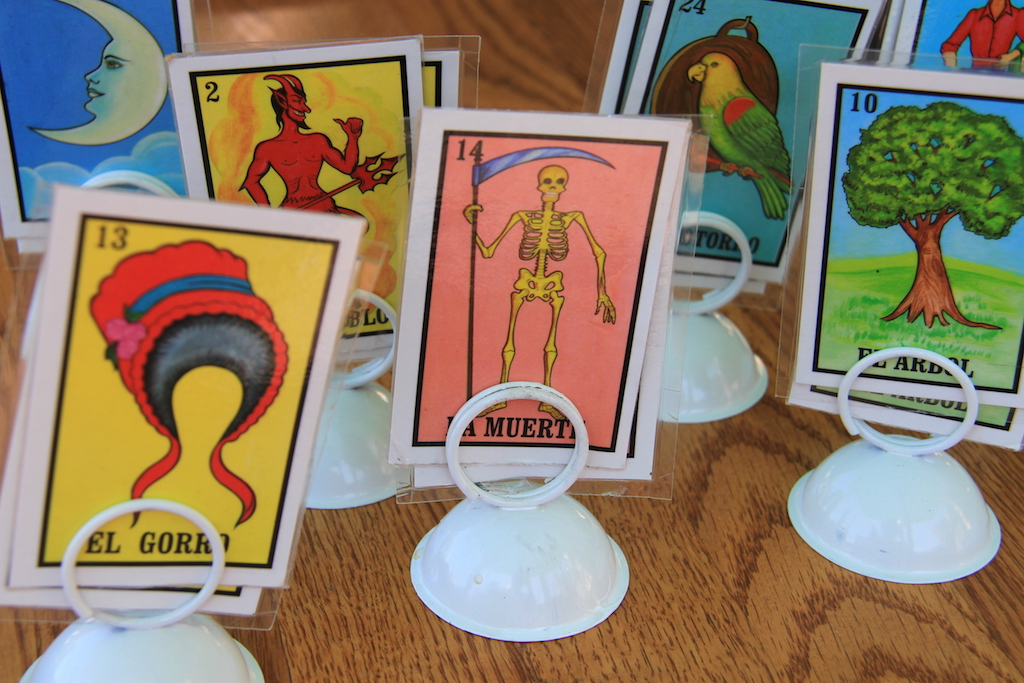 The ambiance is playful with a tropical beach theme. Photo by Aleah Kidd

After noticing the absence of what most consider the quintessential Mexican beer, Corona, I was informed that a Mexican-style lager also named Taco Cerveza was coming soon on tap. The Sheboygan based brewery 3 Sheeps is creating this new beer specifically for the restaurant, and I have to believe it will stand in for that classic golden liquid with lime.

The tacos arrived on a bamboo serving tray in their own taco stand. The Al Pastor was a tasty balance of spiced meat and pineapple pico de gallo, and the Chi-Dog delivered an interesting hybrid of hot dog and taco. If I had to imagine a ratio, it was certainly more hot dog than taco, but with more spice due to the pickled jalapeños. The patrons next to me had high reviews for their tray of the Ceviche, Banh Mi and Pollo a la Plancha tacos. We shared an appetizer of Chipotle Elote, which is essentially a slightly spicy and dreamily creamy corn and cheese chip dip. Between the tacos and chips, it was a tasty lunch that highlighted unique flavors and left me eager to try more of the menu, along with the Taco Cerveza on draft. 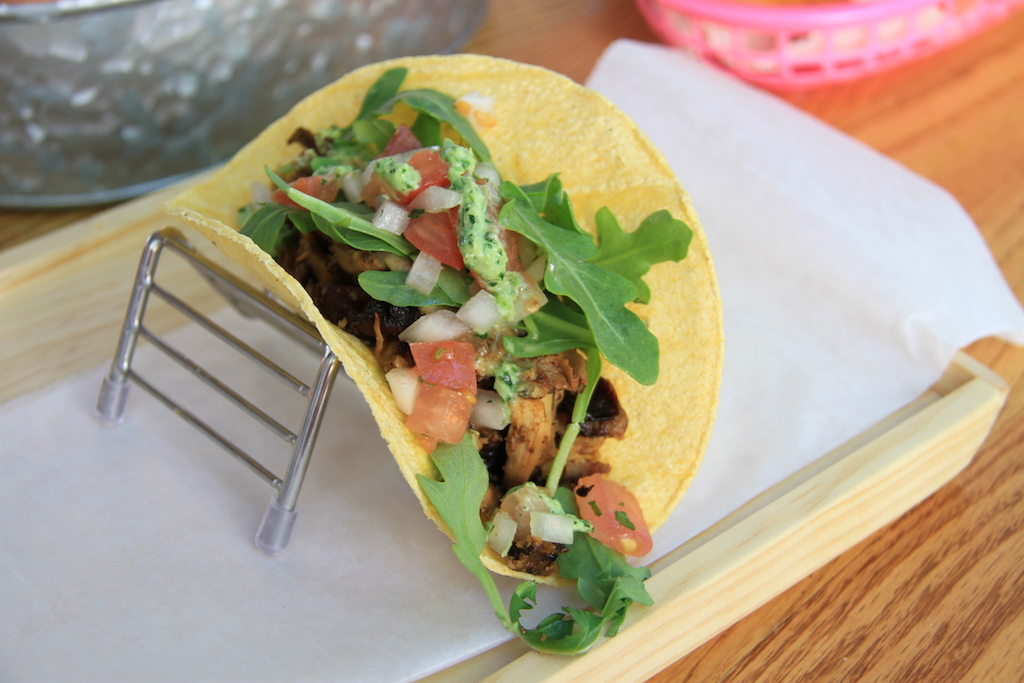