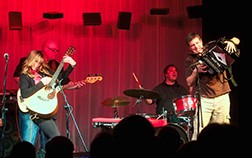 If I remember correctly, the first time I did a story on the band Copper Box, they were playing a St. Patrick’s Day gig at a German restaurant, which makes perfect sense if you know this Fox Valley band’s penchant for eclecticism. They were crowd pleasers then, and years of gigging have only sharpened the band’s many talents. Beer fest attendees will know them as one of the two constants, along with hometown boy Jerry Schneider’s polka band, at the Wisconsin Microbrewers Beer Fest held in Chilton every third Sunday in May.

Copper Box co-founders/leaders Danny and Michelle Jerabek met as children when their parents’ separate polka bands came together for fests and events. Both walked away from the experience of being polka band children as talented multi-instrumentalists and exciting performers.

Danny’s command of the button accordion is a thing to be seen and heard. Combined with Michelle’s saxophonism, they are this area’s very own version of Brave Combo (to whom, coincidentally, Copper Box has an actual connection). The couple has command of so many instruments – keyboards, guitars, horns, their own voices and, really, whatever needs playing – that it might be easy to overlook the crack rhythm section.

Copper Box features one of my favorite Fox Valley drummers, Jason Van Ryzin, who I first met at a blues jam in Kaukauna when he was still a student at Lawrence University, way back in the early ‘90s. He is more than a drummer – Jason is a disciple of drumming, a perpetual student of percussion. You might not even notice him because he is always precisely where he is supposed to be. You can count on him to be there with authority. It’s called timing. He’s got it.

Bassman Drew Hicks joined the band in August and rounds out this talented quartet that returns to the area for a Nov. 29 performance at the Third Avenue Playhouse.

I just caught up with Copper Box’s latest recording, After the Rain. Michelle’s vocals are deservedly highlighted. On “Did Your Mama Ever Tell You No,” written by the Jerabeks, Michelle’s voice and Danny’s accordion joust with the dexterity of the seasoned musicians they are, but also with the freshness of musical explorers.

They give a ska-tinged reading to that polka favorite “Somewhere My Love” and give new life to one-hit wonders Mungo Jerry’s “In the Summertime.”

Michelle wrote a song on the record called “Workin’ Man” that absolutely rocks, with a great guitar noodle throughout.

After the Rain is the band’s seventh release. They are a powerhouse band. Catch them live on the 29th and you will want to take a CD home. You can also check them out online at Copperbox.com.