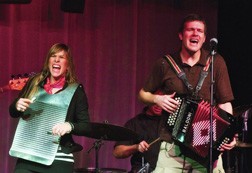 Husband and wife Danny and Michele Jerabek of the eclectic Zydeco, Tex-Mex, blues, jazz and rock and roll band Copper Box performed at the Third Avenue Playhouse on Feb. 25. Photo by Len Villano.

Copper Box will take the stage at the Southern Door Community Auditorium (SDCA) on March 23 at 7 pm.

Danny Jerabek received his first three-row button accordion, commonly referred to as the “button box,” from his grandfather when he was nine years old. He was asked to learn a few Czech and German songs for his family and was later inspired by Don Cialkoszewski and the accordion legend Steve “Esteban” Jordan to take his accordion playing to the next level and beyond.

Drawing inspiration from many types of Americana, roots music like Zydeco, blues, jazz, rock, polka and Tejano, Copper Box’s sound is a distinctive musical melting pot that is easy on the ears and good for the soul. Jerabek performs on button box, cornet, keys, penny whistles, and vocals along with his wife Michelle Jerabek, who performs on saxophone, guitar, flute, washboard, and vocals. Fellow musicians Kevin Junemann, on bass and ukulele, and Jason Van Ryzin, on drums and percussion, round out the group.

Copper Box has been gaining momentum, performing over 140 shows a year for music festivals, performing art centers, and community concerts throughout the US.

SDCA is located at 2073 County Road DK in Brussels. Tickets are $10 and can be purchased by visiting http://www.southerndoorcommunityauditorium.org. For more information call 920.493.5979. Each student that brings an adult will be admitted at no charge.