Baileys Harbor hasn’t been so quiet of late.

Many residents and business owners are concerned that the new map of the town’s “core” commercial district, which has gained visibility as the Door County Planning Department works to incorporate it into its comprehensive plan, will lead to sprawl and change the character of the town.

At the center of the debate are two adjacent 40-acre parcels owned by Joseph Parent Enterprises between Summit Road and County Highway E to the south of town. The northerly 40 acres fronting Summit Road are zoned high density (allowing for residential development of any kind on 20,000 square-foot lots) and the southerly 40 acres are zoned SF20 (allowing for single-family residential development on 20,000 square-foot lots). 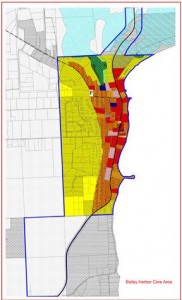 Many Baileys Harbor residents question whether the downtown core should be expanded to include the spurt to the south.

James Parent spoke for the company and said there are no imminent plans for the property at the moment. The property was purchased in 2007 with hopes of building an assisted-living facility there, he said, but those plans fell through.

“We haven’t done a lot of other planning for that property,” said Parent, who is also Baileys Harbor Town Board Chairman.

The town’s 1995 map did not include the tracts in its defined core, but the new boundaries stretch the core from County Highway Q on the north to County Highway E on the south.

Gordon Rowley served on the Land Use workgroup for Baileys Harbor’s Smart Growth Plan, and he said that boundary is not what committee members envisioned.

“There’s been some change in the definition of the core area map since 2005,” Rowley said. “The maps I looked at expand the core development areas in contradiction to our Smart Growth Plan, which called for maintaining the rural nature of the north and south corridors.”

The Baileys Harbor Smart Growth Plan completed in 2005 laid out several specific land use objectives. Among them:

Those objectives appear to be in contradiction to the new core definition, but Parent said that although the Smart Growth Plan referred often to the town core, it never specifically defined its boundaries, something the town board was charged with doing later.

Mariah Goode, head of the Door County Planning Department, said that the original plan Baileys Harbor submitted to the county for inclusion in the county comprehensive plan did not have a clearly outlined core area.

The town finally passed a specific motion defining the new core at a joint meeting of the Plan Commission and town board on March 9.

“It was after-the-fact, there was no question about that,” Parent said. “We tried to project growth in the direction it should go, and from a town standpoint we felt kind of like we were landlocked with The Ridges to the north and the lake to the east. The only place to go was to the south. At some point growth will have to go somewhere.”

Rowley said that his understanding of the core definition at the end of 2005 was that it would remain confined to the area traditionally recognized as the downtown, roughly between Anclam Beach on the south and the Sandpiper restaurant on the north. He said the goal was to get the downtown core saturated, then look to expand.

“Our Smart Growth plan identified a need for about 30 acres of commercial development over the next 20 years,” he said. “[The new maps] vastly exceed what the projections said were needed.”

Town Clerk Doug Smith said there is a great deal of misinformation circulating through the town about the property that has muddied discussion. Parent has not submitted any development plans for the property, and Smith cautioned that any plans would have to go through normal processes of public review.

“Just because the land is part of the future core plan, doesn’t change the fact that he still has to go through the proper channels,” Smith explained.

If the land were not included within the core boundaries, it wouldn’t mean it couldn’t be developed. Goode said there are essentially two advantages to having property included in the core area. It allows for higher density for multiple occupancy units and a decreased road setback.

“Being designated as part of the core area would also make it likely that it would get approved for any zoning changes fairly easily,” Goode said.

The Door County Board of Supervisors must approve the county comprehensive plan by Dec. 31. Goode said that the core is technically a county designation, so it could ask the town to redraw the boundary, depending on what it hears in the review process.

“One could definitely make the argument that if it were heavily developed that this would constitute sprawl that may not be desired,” she said. “When Baileys Harbor did their Smart Growth Plan (on which Goode was a consultant) there was a lot of discussion about not wanting ‘leap-frogging.’”

Parent said he didn’t want to speculate on how a southerly development might impact the existing core of the town.

“Who’s to say?” he asked. “It depends what the business is. If it’s something the town needs and people want, I don’t see how that could hurt.”

The Planning Department has one more open house scheduled for citizens to submit comments on the comprehensive plan Aug. 31, from 7 – 9 pm at the Forestville Town Hall in Maplewood, 7705 County Highway H. A public hearing about the plan will be held at the county Government Center, 421 Nebraska Street, Sturgeon Bay Sept. 17 at 7 pm.

Comments can also be submitted by calling 920.746.2323 or writing the Door County Planning Department at 421 Nebraska Street, Sturgeon Bay, WI 54235. Maps can be viewed online at http://map.co.door.wi.us/planning.