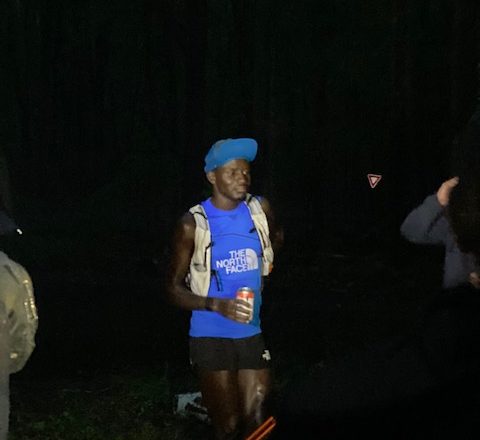 Finishing at the trail’s eastern terminus in Potawatomi State Park on the night of June 22, Aussem-Woltering made his way through the dark, rain and rugged terrain to accomplish his goal of setting the trail’s fastest known time (FKT), beating the previous record by a little more than five hours. At 8:35 pm, with dozens of spectators eagerly waiting, Aussem-Woltering strolled in, spread his arms above his head, and ceremoniously kissed “the rock,” signaling the end of his epic journey.

It was an impressive feat indeed, and his final stretch was most astonishing. During his last 36 hours, Aussem-Woltering covered an incredible 160 miles while going on fewer than 30 minutes of sleep. Finishing the trail requires averaging 50-plus miles per day for three straight weeks: roughly the equivalent of running two marathons a day for 21 consecutive days.

Setting out on June 1, Aussem-Woltering endured the rough trails of Wisconsin’s Northwoods, which meant ticks, mosquitos and, less than a week into his trek, a sprained ankle. The injury limited him to walking for five days to allow the ankle to heal and also required him to make up significant mileage for the remainder of the trip.

When asked at what point he knew, without a doubt, that he would break the record, Aussem-Woltering responded, “I’d probably say this morning, after putting in the 100 miles in 23.5 hours. Just being able to make up the deficit that I had going into the final few days. This morning I felt like I could definitely get it. Until then, for the past 20 days, it felt like I was playing defense, and I was just trying to stop losing time.”

Aussem-Woltering’s husband, Tom Aussem, led the crew across the state. It included a photographer and a fellow runner whom Aussem-Woltering coaches. Aussem fielded questions from spectators while waiting for his husband to finish.

“Who would have thought we would be trying an FKT during a pandemic … and with racial issues going on in the country?” Aussem said. “Ticks seem to like the western area, and mosquitos do, too. On top of everything else, there were remnants of a tropical storm that came through. He walked 15 miles through that in sideways rain, and that was just devastating. The poor dude was out there wavering back and forth while we had a light shining on him in the middle of the night.”

A couple of former FKT record holders joined Aussem-Woltering for phases of his run, and he had a live following online that was tracking his progress. In addition to weather-related challenges and various all-night runs, he had up-close encounters with wildlife.

Aussem-Woltering and his crew made this journey not for personal gain or glory, but to serve as an inspiration to others while also raising money for Feeding America. As of his final running date, he helped to raise more than $21,000 in donations for the charity.

Less than a minute after reaching his destination, Aussem-Woltering was answering questions from spectators for nearly half an hour as if he had just completed an afternoon jog around the block. His demeanor was calm, and he shared his experiences openly with onlookers and followers online.

A glimpse of his integrity and dedication was best summed up by his husband, who commented on Aussem-Woltering making a wrong turn midway through his trek.

“It’s a testament to Coree and who he is,” Aussem said. “He made the mistake and came out on the road section. Instead of calling us where we could legally go and pick him up and bring him back so that he could correct it, he walked all the way back and added about four miles, back to where he made the mistake – on the bum ankle.”

A sprained ankle, ticks, mosquitos, storms, bear, deer, a pandemic and nearly 1,200 miles of trail tested the human body and spirit. Coree Aussem-Woltering conquered it all.