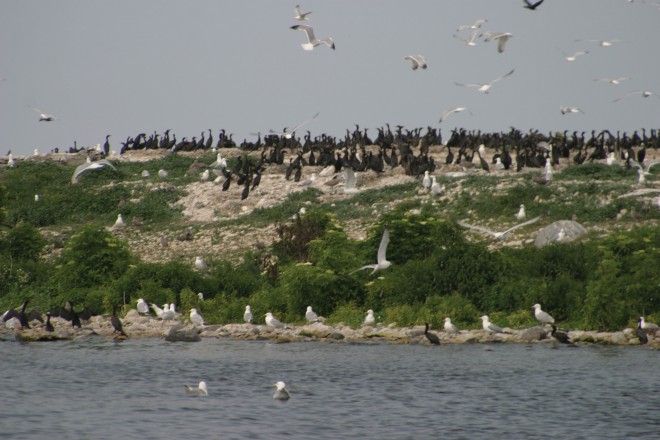 Cormorants, once a threatened species, are now seeing a dramatic increase in their numbers.

Those who’ve visited the Door County shoreline in recent years may have noticed an increased number of a distinctive bird – the cormorant. Current studies are slowly revealing the impact these birds have on the Great Lakes ecosystem.

A relative of the pelican, Double-crested Cormorants have a four-foot wingspan and an orange throat pouch that they use to hold fish. They dive to relatively great depths (5-25 feet) to catch fish. Cormorants feed primarily on small, mostly non-commercial, shallow-water fish, such as Alewife, Rainbow Smelt, and Yellow Perch. Commercially fished species are typically taken in small amounts. The US Fish and Wildlife Service (USFWS) estimates that the continental population is about two million birds, of which 70 percent are concentrated around the Great Lakes and prairie region of Canada, with five colonies on northern Lake Michigan. Cormorants typically nest on islands with many other species that are protected or threatened, such as the Great Egret, Caspian Tern, Common Tern, and the Black-crowned Night Heron.

The Double-crested Cormorant went from occasionally flying through the Great Lakes basin during migration to expanding their range and colonizing in the Great Lakes starting in 1913. They have gone from being placed on the threatened and endangered species list in 1972, after being devastated by DDT and PCBs, to currently expanding beyond historical populations and being questioned for their impact on recreational and commercial fish populations.

The cormorant population increase could be attributed to pollution controls that have lowered toxic contamination amounts, federal and state protection, and an ample food supply of fish that are easy to catch, such as Alewives in their breeding areas and fish from aquaculture ponds in their southern wintering areas.

There have been complaints from the public and commercial fishing industry in Door County that cormorant depredation is reducing recreational and commercial fish populations. The relationships between the local populations are currently being studied. The University of Wisconsin-Madison and the Department of Natural Resources (DNR) are studying the diet of cormorants on Cat Island in Green Bay. The study involves testing the digestive system of cormorants to determine the quantity and species of consumed fish. A statistical model will be created to determine the annual mortality for Yellow Perch populations that are attributed to cormorant depredation. Mortality rate models already exist to account for the impacts of commercial fishing and sport fishing. This study will assist the DNR in determining the impact of cormorants on commercial fish populations. These studies are an essential component to establishing control needs, and methods of control that are cost effective and efficient.

The United States Fish and Wildlife Service, under the Federal Migratory Bird Act, was in charge of managing cormorant populations until the Public Resources Depredation Order extended authority of cormorant control to the Wisconsin DNR and area tribes. If it is determined that local cormorant populations in Green Bay and northern Lake Michigan need to be controlled, the DNR will manage the control efforts.

In the meantime, until the studies are complete and a plan is established, the Double-crested Cormorant is protected by the Federal Migratory Bird Act, and depredation orders and permits must be obtained to take any control efforts such as taking or disturbing cormorants, eggs and nests. These permits are typically only issued to address specific damage when all other forms of damage abatement have failed.