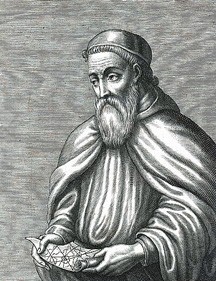 The commonly held story of how America got its name – the one found in most textbooks that address the issue – is wrong. And, while no one is certain of the facts involved in the naming, there is a lesser-known theory that is compelling. But before we get ahead in the story let’s start with the theory you probably already know.

The popular theory has been that the name America is a derivation of the explorer Amerigo Vespucci’s name. Vespucci was an explorer who arrived in the “New World” in 1499. The major accomplishment of Vespucci’s exploration was that he became the first to clearly identify the “New World” as a new and distinct continent (previous to Vespucci’s assertion, many still believed that the “New World” was a portion of India).

So how did Amerigo Vespucci become linked with naming the “New World” America, you wonder? Well, the answer lies with a largely forgotten clergyman who lived near the monastery of St. Deodatus in the Vosges Mountains in the Duchy of Lorraine on the French/German border.

This clergyman led a small group of researchers who began gathering all the information they could about the known world, including the fantastic stories of the lands across the ocean to the west. In conjunction with this project, the clergyman in question adopted the pseudonym Hylacomylus (from the Greek word for “wood,” the Latin word for “lake,” and the Greek word for “mill”) that was later translated back into his native German, creating the family name of Waldseemüller – the name he is generally known by today.

In April of 1507, Waldseemüller and his group published a 103-page volume encompassing the results of their research, titled Cosmographiae Introductio. Much of the material included in the volume was standard information (i.e. principles of cosmography, distances between key locations, details on climate, etc.), but it also contained the mistake, which would ultimately make Amerigo Vespucci famous for centuries to come.

During the course of his research, Waldseemüller found continual references by sailors and explorers to a great land to the west they called “America” or “Amerika.” Waldseemüller also read an extended account of Vespucci’s travels and the fact that Vespucci had realized that the lands to the west were entirely new. And then Waldseemüller took two unlike things, put them together, and put them into print. Here, in part, is what Waldseemüller wrote:

“Now these parts of the earth (Europe, Africa, and Asia) have been more extensively explored and a fourth part has been discovered by Amerigo Vespucci (as will be described in what follows). Insomuch as both Europe and Asia received their names from women, I see no reason why anyone should object to calling this part Amerige (from the Greek ‘ge’ meaning ‘land of’), i.e. the land of Amerigo, or America, after Amerigo, its discoverer, a man of great ability.”

Included in Waldseemüller’s book was a huge map with the “New World” labeled as America. Because this book constitutes the first published work to use the term “America” it has simply been assumed that Waldseemüller named the new lands to the west, that his version of the story is correct, and that his words reflect his thoughts on the proper form the new name should assume.

So the questions are these: why were sailors, whether they had actually sailed to the new continent themselves or not, calling the land America? And where did this name come from? No one can answer these questions with absolute certainty, but here is that “compelling theory” I referred to at the opening of this column.

The hypothesis involves several sects dating from the time of the Dead Scrolls, some of which were authored by members of these sects. According to Josephus, the historian of the Jews during the first century, the Essenes believed that “good souls” lived beyond the ocean in an idyllic region. The direction of this home of “good souls” is to the west. Another sect during this same time frame were the Nasoreans who are now believed to be the same people who developed the settlement at Qumran, where many of scrolls have been found in caves surrounding the ruins of the ancient settlement.

Now skip ahead to the present in southern Iraq where a sect who call themselves the Mandeans exist. Like the Nasoreans, the Mandeans trace their roots to a man they call Yahia Yuhana, better know to us as John the Baptist. The Mandeans use the word “natzoraje” to describe themselves and they refer to their priests as “nasoreans.” In essence, without going into all sorts of history involving travails, migrations, etc., the Mandeans, by all evidence, are surviving members of the Nasoreans.

Now consider this, folks: the Mandeans/Nasoreans, like the Essenes, believe in an idyllic land to the west. Particular to the Mandean/Nasorean thought is the belief that the inhabitants of this land to the west are so pure that they can not be seen by mortal eyes and that this land is marked by a star which they call Merica.

This idea of an idyllic land to the west under a star called Merica, which seems to date from before the time of Christ, had lingered through the centuries. Mention of an idyllic land in the west can be found in cultures ranging from the Jews to the Greeks to the Celts. Though reference to a star called Merica is not universal, it seems reasonable to assume there was knowledge of the Nasorean belief among other cultures down through the centuries. There is even a rather compelling argument that promotes the idea that the Knights Templar may have reintroduced and popularized the concept of a land to the west under a star called Merica to Europe during the early portion of the 12th century.

Is this where the name “America” came from? Well, as I said, no one knows for certain, but it is certainly an entertaining and thought-provoking hypothesis.