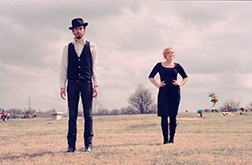 Growing up the son of a preacher, Appleton native and singer-songwriter Cory Chisel was raised on church hymns and Johnny Cash.

Chisel and his sister were often called upon to sing during his father’s church service, where his mother also played organ. Because of his family’s profession, Chisel’s musical path was forged at an early age.

“There are lots of different elements to it,” Chisel said. “One was the art of performance. Something I saw from an early age was the ability to steer people in a certain direction. Also, having mixed feelings about religion, it pushed me toward my first self-exploration moments.

“I don’t know what my life would have been without it,” he added. “The importance of the songs was always a part of my life, they were never secondary.”

Chisel, who was named one of 2009’s Best New Artists by Rolling Stone, has since grown into an acclaimed music artist and has toured the globe opening for Norah Jones.

Possessing a knack for vivid storytelling and the ability to turn a phrase within his songs, Chisel gives credit to listening to his father’s sermons during Sunday service.

“A sermon has to have an introduction, it has to have something to keep you listening, and by the end of the story, it has to bring something home that you’ll remember,” he said. “I think this form of storytelling was just a part of my life. Watching my dad write sermons every Sunday and just being around a family that made a living on the basis of communication.”

Chisel’s wide-ranging influences cover the gamut of musical landscapes, including gospel, country, folk, blues and Celtic. Combining these various genres and styles is the foundation of almost every one of his songs.

“I think if you can figure out a way to unlock these forms, you can make (your music) current so you’re not just a throwback,” he said. “If you like Rush, and you also love Johnny Cash, somehow that all makes sense in your record collection. So in order to make music, that sort of thing makes sense as well.”

All “Celebrate Community” concerts are free of charge and take place on the hospital green space on 16th place in Sturgeon Bay. For more information, contact 920.493.5979. In case of rain all concerts will be held upstairs at the Door County Fire Company 38.S 3rd Ave. Sturgeon Bay (former Ladder House).